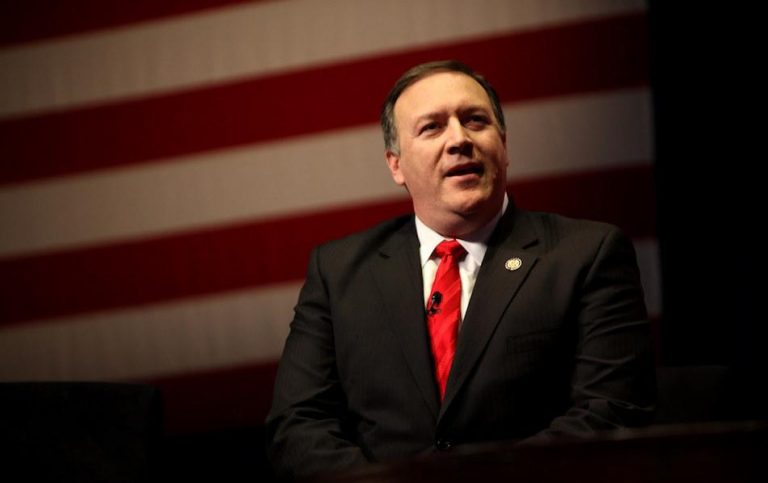 U.S. Secretary of State Mike Pompeo has described the Chinese Communist Party as the central threat of our times during a visit to London, just days after the British government announced it would be using equipment from Chinese tech giant Huawei.

“The Chinese Communist Party presents the central threat of our times. It is an enormous economy to which the American economy is deeply tied,” Pompeo pointed out to press during a meeting with British Foreign Secretary Dominic Raab at a London event on January 30.

“There is a huge opportunity for us to do really great creative, innovative business work between our two countries,” Pompeo said as reported by Sky News. “But the Chinese Communist Party under President Xi has made clear that they have an agenda that is not always consistent with the very values that Dominic and I have been speaking about this morning.”

Pompeo made his press remarks two days after the British announced they will use some telecommunications equipment from Huawei, a move opposed by Washington due to long-held security concerns about the Chinese tech company’s operations.

Pompeo went onto describe how the U.S. and Britain — and the West in general — need to work collectively to “ensure the next century is governed by these Western democratic principles.”

“And that will take a concerted efforted, not just by the United States, but by all those who love freedom and cherish democracy and the rule of law to ensure that remains the predominant model for the world for the next century,” he said.

In the below video Pompeo warns Britain about using Huawei equipment and other deals put forward by the Chinese communist regime.

The day before the above comments, Pompeo called on Britain’s leader, Prime Minister Boris Johnson, to rethink the Huawei deal, reported the Financial Times. He recognized though, that it was a sovereign decision.

Pompeo was referring to China’s National Intelligence Law from 2017 that compels Chinese organizations and citizens to “support, assist and cooperate with the state intelligence work,” reported CNBC.

The Financial Times reported that the U.S. and UK are likely to work together to develop a Western competitor to Huawei due to fears about the Chinese company’s prevailing role in supplying telecoms equipment, especially 5G.

Watch this China Uncensored episode for more on why Huawei is a threat.

Unlike many of his predecessors, Pompeo has long been outspoken about the Chinese Communist Party. During the release of the 2018 Annual Report on International Religious Freedom in the middle of last year, he highlighted the communist regime’s treatment of people of faith in China.

“In China, the government’s intense persecution of many faiths — Falun Gong practitioners, Christians, and Tibetan Buddhists among them — is the norm,” Pompeo said.

“The Chinese Communist Party has exhibited extreme hostility to all religious faiths since its founding. The party demands that it alone be called God,” he said.

Pompeo also highlighted the fate of the Uyghurs, ethnic Kazakhs, and members of other Muslim groups who have been subjected to a harsh crackdown that includes up to more than 2 million people being locked up in detention facilities in the Xinjiang region in China’s far west.

Watch this Human Rights Watch report on how the Chinese Communist Party is a global threat to human rights.