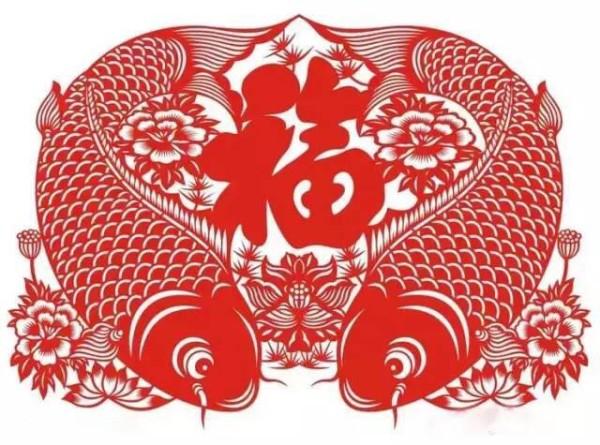 The Chinese character fú ( 福) is traditionally seen as a good omen in China, especially around the New Year. Sometimes, people will hang up signs, paper cuts, or embroideries carrying the character fú on them in different places. You’ll find fú in stores, in windows, or dangling from the rearview mirrors of cars.

Fú translated into English means good luck or fortune. It can also mean wealth or you are lucky, depending on the context. The following text will try to make a connection between the way fú can be interpreted and how one can apply that to transforming one’s mindset to become happier and more successful. 2020 is the year of the rat. So you’ll probably see many motives related to the rat. They will all have one thing in common, however —the Chinese symbol fú.

But also, you may find fú in between different motifs like two fish, or a dragon and phoenix. Depending on which context you find fú in, the meaning or it’s symbolic interpretation may differ slightly. All in all, there is only one way to write fú (福). As a matter of fact, there are many different ways people get creative and illustrate the Chinese character fú, as the following papercut illustrates.

Understanding fú and it’s variations in meaning depending on the context resembles how we see ourselves and the need for luck in our daily lives. For someone battling with illness, fú or luck can mean health. For someone in dire need of income, fú or fortune may mean a job. For someone in need of revenue in their business, 福 or luck may mean customers.

How can you change your mindset by understanding fú? Understanding the different relations fú has to life can be of great help when you are adjusting your mindset, which is like a type of inner compass. If you know your goal-set in your mind, then a compass can give you the direction, and your actions will take you there. Your mindset can play the role of creating obstacles and adversities on the way to your goal — or the opposite. For someone battling with being overweight and the health issues related to it, using the deeper meaning of fú to change your mindset may mean replacing the fear of failure with the empowering meaning of fú (good luck and fortune).

This means that instead of thinking: “Why even bother trying, I’m afraid I’ll fail anyway,” you could also think: “In the New Year, I want to lose weight. I wish for fú. I will take action and do everything I can to accomplish my goal.” Fú does not mean that luck will suddenly fall from heaven. It means that whatever you do will bring about luck in the context you need it. So we still need to take action to get lucky and break a sweat here and there, or in other words — believing in a lucky outcome of your actions is different from challenging life to give you a lucky outcome, even though you don’t believe in what you are doing.

For the traditional Chinese minded, fish is always part of the New Year celebration meals because it symbolizes luck, wealth, and abundance in everything you do in the New Year. In the same way, wishing for luck and abundance may mean that the student will have to do what a student does to get good marks, a salesman will have to do what a salesman does to be a good salesman.

Mindset refers to the way a person thinks — his notions and beliefs that control his emotions and actions when trying to bring about the desired outcome. If, for example, you believe that money is bad and the root of all evil, but at the same time you are trying to start your own business with something you believe helps other people, you may be limited in your ability to close a sale and land a customer, just because of your mindset in regards to money.

But if, for example, you don’t care whether you have the money or not, but you price your service or product in a fair and truthful way, then you will have a different confidence when you are in a negotiation and asking someone to pay that price — which you know is honest and fair. This shows that the outcome may be entirely different because one’s mindset is also different. That’s just to illustrate the effect of a certain type of mindset a person has on their actions directed at a certain desired outcome — how the deeper meaning of fú relates to the context.

In the context with two fish, fú means luck in terms of abundance. This is just like in the past when people’s survival was based on having enough to eat. The abundance of fish in the fisherman’s net would be a sign of luck. But nevertheless, the fisherman has to do what a fisherman does to catch luck and abundance.

Fú with a dragon and a phoenix

The fú sign in between a dragon and a phoenix has a special meaning, in regard to male and female aspects. But to really understand the meaning of fú is this context, you have to understand the traditional meaning of the phoenix and the dragon. Traditionally, the dragon symbolizes the divine male aspect in regard to a ruler like a king or an emperor. Whereas the phoenix represents the divine female aspect in terms of a ruler like a queen or an empress. The meaning of fú in this context means a divine form of bestowing luck on humans. The higher divine beings are the symbolical holder of this good luck and by venerating higher beings up there with respect, they will share that good luck with us down here.

The child symbolizes the passing down of good luck and fortune, the passing down to their descendants and many generations to come. For society today, this could even be interpreted as all good things that bring luck and fortune being passed down from one generation to another. This could be traditional culture, family values, and universal morals and values. Essentially what we pass down within a family from parents to children, for example, is more than just material wealth. It is also a way of thinking, a way of dealing with life’s adversities and a strategy of consistently doing whatever it is you need to do to reach the desired outcome.