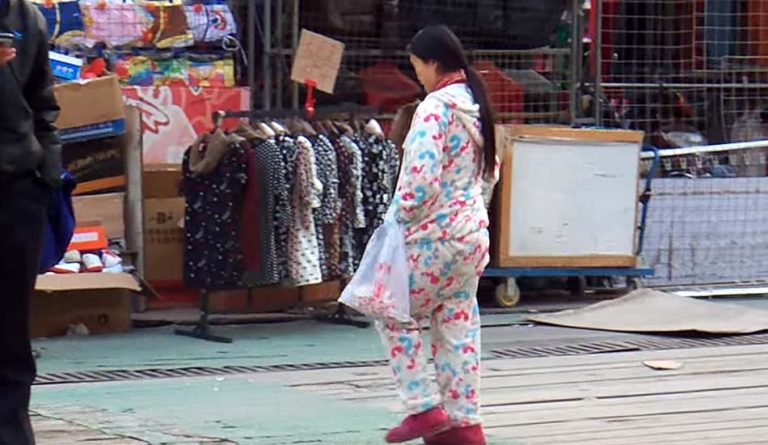 The Chinese city of Suzhou is shaming people for wearing pajamas on the street. (Image: YouTube/Screenshot)

The Chinese government has laid out one of the world’s most extensive surveillance networks in the country. While this has been done on the pretense that it would enhance the security of the people, authorities in the Chinese city of Suzhou are using the technology for something bizarre — to publicly shame citizens who walk the streets in their pajamas through facial recognition.

When Suzhou started posting street photos of citizens in pajamas, they also published the person’s name, government identification numbers, and where their “uncivilized behavior” took place. “Uncivilized behavior refers to when people behave and act in ways that violate public order because they lack public morals… Many people think that this is a small problem and not a big deal… Others believe public places are truly ‘public,’ where there is no blame, no supervision, and no public pressure… This has brought about a kind of complacent, undisciplined mindset,” the authorities stated in a social media post (The New York Times).

The images quickly went viral, angering many people who thought the officials had gone too far to shame people. Some were outraged that wearing pajamas on the streets would be considered “uncivilized” when it was something very normal. Others were unhappy that the officials had chosen to share the private information of the pajama wearers online, risking the chance that these people might be subjected to ridicule by their peers. One social media user noted that when celebrities wear pajamas on the streets, no one ridicules them. Instead, it is considered “fashionable.” As such, why should a common person be held to another standard?

Back in 2009 when Shanghai was due to host the World Expo 2010 in a few months, the authorities tried to ban wearing pajamas in public. Special “pajama policemen” were stationed in the neighborhoods to catch rule-breakers, while posters saying “Pajamas don’t go out of the door; be a civilized resident for the Expo” were plastered throughout the city. William Nee, a China analyst at Amnesty International, believes that the current pajama shaming act of the Chinese regime is an example of how facial recognition technology can end up being used for illegitimate purposes.

“Shaming people for wearing pajamas is not a legitimate aim, but a total misuse of the technology… While this can seem like just a cute story, it actually lays bare some of the most profound risks to human rights posed by facial recognition technology. It should be a wake-up call to reexamine and debate whether we want to live in societies armed with this sort of powerful surveillance capabilities on every corner,” he said to CNET.

In Shanghai, authorities have been using facial recognition to catch jaywalkers, which refers to people who cross the street away from designated crossing spots. In some stores, customers will have to register their photos with the retailer. At entry points, people look up at the camera to get the door open. Even public toilets in China are being equipped with facial recognition.

“To improve the standards of public restrooms, about 70,000 of them were built or renovated at tourist sites across China between 2015 and 2017. And some were fitted with facial recognition technology: Toilet paper dispensers that remember the user’s face. Their job is to set a limit on the amount of toilet paper one can take,” according to Channel News Asia. People have to stare at the dispenser for about three seconds to get toilet paper.