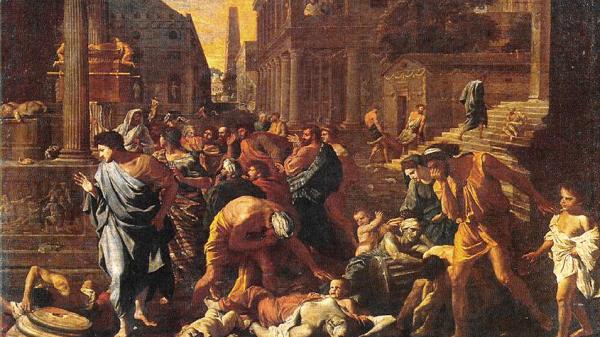 A disease not only plays a role in the fate of an individual, but it can also invariably determine the destiny of entire nations and peoples. Pandemics have altered the course of history and can strike at the heart, the rhythm, as well as the ups and downs of dynasties, from the Eastern world to the Western horizon.

The Black Plague, also known as the Black Death, was a virulent and deadly bacterial infection carried by flea-infested rodents across Eurasia, peaking in Europe from 1347 to 1351. In total, the plague may have reduced the world population from an estimated 475 million to 350-375 million in the 14th century and it took 200 years for the world population to recover to its previous level. How can something as simple as a flea bring humankind to its knees? This is a historical reality that the then rulers could hardly have imagined, but was an unstoppable force of nature.

Human beings go through the cycles of birth, aging, and death. Likewise, a great dynasty progresses from having its own power and prosperity only to fall into corruption and decay. The Chongzhen Emperor (1627-1644) was the last Emperor of the Ming Dynasty, as well as the last Han Chinese to reign as Emperor of China. This Emperor had the will but wielded little power or control. The courtiers were greedy and each had their own agendas, while the government was tyrannical. The people were overwhelmed with suffering to the extent that everything deviated from the will of Heaven.

In the eighth year of Wanli or Ten-Thousand Lunar Calendars, a plague started in Datong, Shanxi, and was literally described as “out of ten rooms, nine rooms are full with sick people.” Those who were infected had swollen necks and the condition was commonly known by the people as “big head.” The victims would quickly perish within one or two days. This plague was extremely contagious and virulent. It quickly came to the stage that no one cared about the sick or the dead due to the fear that they also could be afflicted by the disease.

During the sixth year of Chongzen’s reign (1633), a plague started in Shanxi and spread to Peking in 1641. In the summer of that year, people saw colonies of rats biting each other’s tails and making mischief; they swam across the river like an invading army and entered the territory of Henan, Hebei. The entire northern part of China was infested with rats.

In that same year, to add insult to injury, there were, as well, severe droughts and infestations of locusts. Famine and pestilence claimed the lives of 60 percent of the population. Those who survived were rendered helpless, with their lives ravaged and grief-stricken. The dead were just left covered with mats. Many of the survivors became either beggars or robbers.

Panic in the people was rife, even beyond description. In summer and autumn, if anyone had a lump on their body, they would die in less than an hour. This was the “bubonic plague.” It was spread by infected fleas from rodents, particularly rats. Sadly, many people perished. It soon spread to Tongxian and Changping suburbs.

According to historical records, during the 16 years of Chongzhen’s reign, disasters and epidemics were out of control, and wool fleas and plagues were rampant. Those that were infected spat blood that oozed out like watermelon juice and they died instantly. Several million people perished in Jiangzhe and the surrounding area.

In the 17th year of Chongzhen’s reign, Li Zicheng’s army of 550,000 strong invaded Peking. During that time, the plague had been raging for more than a year. A feeble soldier had to guard three dugouts at the defense line of the city, which was almost empty.

In the same year, the Qing army entered the city. Shunzhi, the first Qing emperor to rule over China proper, took over the throne and declared himself Emperor (1644-1661). The mysterious part of all of this was that the plague in Peking “seemed to have been in accord with the Qing army.” Inexplicably, the plague “retreated totally and all of a sudden completely disappeared.” Not even a single Qing soldier was infected.

There were three worldwide plague pandemics, the third of which started in Yunnan. It broke out in Guangdong in 1894 and spread to Hong Kong. It took several decades to sweep across Asia, Europe, and the United States, killing nearly 10 million people in more than 60 countries. The plague that raged all the way from Siberia to northeast China in the late Qing Dynasty naturally became an unbearable burden of the stormy Qing Dynasty.

That plague claimed 60,000 lives in northeast China. It was later brought under control by a Malayan-born Chinese doctor named Wu Lien-teh with the support of the government of the Republic of China. Dr. Wu, a plague fighter, insisted that the bacteria from this plague could be transmitted from human to human. He adopted the methods of isolation and cremation of corpses to effectively control and eliminate the epidemic. He is known as the “father of epidemic prevention” in modern Chinese history.