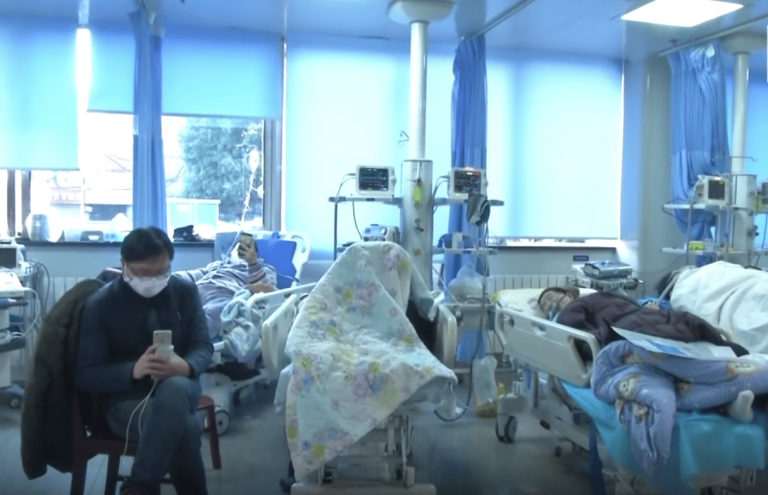 The scenes of hopelessness, the dire conditions amongst the people and their calls for rescue from this merciless infection make us cry. (Image: YouTube/Screenshot)

One hundred and three people died from the coronavirus on February 10, a new daily record since the new coronavirus was first detected in December, as the death toll rose to 1,011, said China’s National Health Commission. That new total surpasses the toll from the SARS epidemic of 2002-03, according to official data.

The SARS epidemic, which also began in China, killed 774 people worldwide. There have been only two confirmed deaths from the new coronavirus outside Mainland China: one in Hong Kong and one in the Philippines.

The number of confirmed infections in the country rose to 42,200 on February 10, with 2,097 new cases, most of them in Hubei Province, the heart of the outbreak. A United States citizen died from the coronavirus in Wuhan, the provincial capital, American officials said on February 8.

A WHO-led international expert mission arrived in China on February 10 to work with Chinese officials. The mission is led by Bruce Aylward, who oversaw the WHO’s 2014-2016 response to the Ebola epidemic in West Africa. WHO Director-General Tedros Adhanom Ghebreyesus said the team will “lay the groundwork for larger international team” who will join them “as soon as possible.” The team could range between 10 and 15.

China tentatively returned to work on Monday, February 10 after an extended Lunar New Year shutdown precipitated by the coronavirus outbreak.

The return to business occurred slowly, as many workers were reluctant to return to large cities from their hometowns, and as managers tried to respond to a slew of new health regulations issued by local governments across the country.

The new rules vary somewhat from city to city, but they all have some common denominators. In big manufacturing centers like Shenzhen, Suzhou, and Nanjing, companies are required to learn the travel history of every employee.

Companies were told to bar entry to anyone who had visited in the past two weeks areas with large outbreaks of the virus, particularly Hubei Province but with some cities also prohibiting the return to work of anyone who had been to Wenzhou, a city in Zhejiang Province, which has also had numerous cases.

The outbreak on the ship, which has been docked at the Yokohama port since February 3, is the largest outside China. About 3,700 people, including about 2,600 passengers and more than 1,000 crew members, are quarantined on the ship, with passengers largely confined to their cabins.

Despite growing calls to test everyone on board the ship, Japan’s chief government spokesman Yoshihide Suga said Monday that under current circumstances, that would be “difficult.” Officials say Japan has the capacity to test 1,000 people a day but also needs to direct resources to other test centers around the country.

Thousands of people stuck on a cruise ship in Hong Kong for four days have been allowed to disembark after tests for coronavirus came back negative. Some 3,600 passengers and crew on the World Dream were quarantined amid fears some staff could have contracted the virus on a previous voyage.

The World Dream was put in quarantine on February 5 after it emerged that three passengers who had sailed on a previous voyage were later found to have contracted the virus.

Chief port health officer Leng Yiu-Hong said all crewmembers — some 1,800 people — had tested negative for coronavirus, and that everyone would be allowed to disembark without the need to self-quarantine after leaving.

A Chinese lawyer and citizen journalist whose dispatches from Wuhan have offered a chilling glimpse of the conditions inside the coronavirus hot zone has been missing since February 6, friends and relatives say.

Chen Qiushi slipped into the city of 11 million on January 24, just after a citywide lockdown took effect, and spent days interviewing people about the outbreak and filming what he saw.

On February 6, after several of his reports circulated around the world, Chen stopped responding to calls and messages, setting off an online campaign to track him down. The 34-year-old knew he would be a likely target for law enforcement, so he gave select friends access to his accounts, instructing them to change the passwords if they went more than 12 hours without hearing from him.

According to Chen’s friends, authorities told his family over the weekend that he had been forcibly quarantined in an undisclosed location.

Xu Xiaodong, a well-known mixed martial artist and friend of Chen’s, said in a YouTube live stream that Qingdao public security officers and state security officers told his parents he had been “detained in the name of quarantine.”

“Qiushi’s mother immediately asked them where and when he was taken away; they declined to say,” said Xu, an outspoken critic of the Chinese government.

“We can do nothing, not even his parents,” said the friend, who spoke on the condition of anonymity to protect Chen. “They didn’t even tell his parents where he is or how he is now. They didn’t allow them to make any phone calls.”

In one of his most widely circulated videos, Chen said he knew the risks he was facing. “I’m afraid. In front of me is a disease, behind me is China’s legal and administrative power,” he said, according to multiple translations. “But as long as I’m alive, I’ll speak what I’ve seen and what I’ve heard. I’m not afraid of dying. Why should I be afraid of you, Communist Party?”

The shutdowns are having a major impact on the world’s second-largest economy and global supply chains. Some big carmakers now face the threat of a shortage of parts. There are also concerns about the supplies of Apple products as the disruptions continue.

Foxconn, which is a major supplier to Apple, has yet to reopen its largest Chinese factory. Shenzhen’s Longhua District, where the plant is located, has said production would restart as soon as officials have completed inspections at the facility.

Last week as Foxconn was pushing for permission to restart operations, it said that hundreds of thousands of workers at its factories would wear surgical masks to prevent infection and undergo regular temperature checks.

Several major carmakers are also among the manufacturers that have extended the shutdowns of their operations as they grapple with a supply chain deeply embedded in China as the coronavirus spreads across the nation.

On February 10, Nissan of Japan said it would shut down its plant in Kyushu, Japan, for four days beginning later this week “due to supply shortages of parts from China.” Other carmakers, like Fiat Chrysler in Italy and Hyundai in South Korea, have already warned that a lack of parts from China could force them to curtail production in their home markets. Japanese manufacturer Suzuki also said it may start sourcing parts from outside China over concerns that the outbreak could disrupt production in India, its biggest market.

Even trade shows further afield are taking a hit with companies like Amazon and Sony choosing to stay away from this month’s MWC technology conference in Barcelona, one of the world’s most important mobile technology trade fairs, because of the coronavirus. Nvidia, LG, and Ericsson also pulled out of the conference.