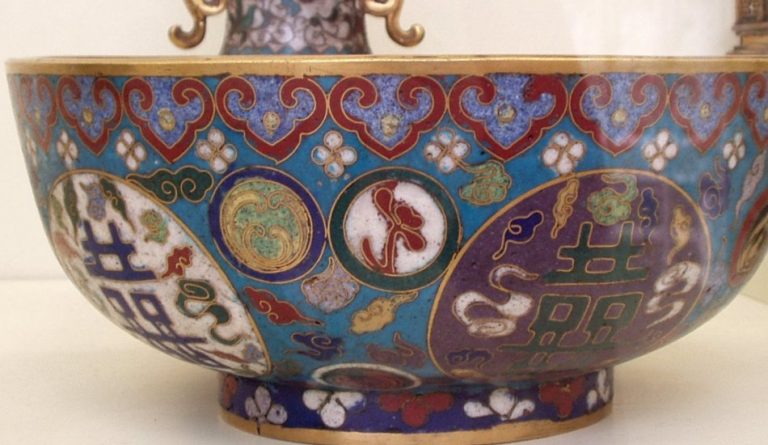 Chinese artisans are well known for having produced some of the world’s best cloisonné works. (Image: pschemp via Wikimedia Commons)

Cloisonné is an ancient ceramic and metalwork decoration technique. Though believed to have originated in the West or Middle East, Chinese artisans are well known to have produced some of the world’s best cloisonné works. The term is derived from the French word cloison, which means “partition.” Craftsmen used strips of metal to create partitions on the surface of an object into which the enamel was cast.

In China, there is an interesting legend of how cloisonné came to be popular. During the first year of the Yuan Dynasty (1271-1368), a major fire broke out in the imperial palace. All the treasures were damaged. However, a vase alone remained intact. The officials gifted it to the emperor, who ended up being very fond of it.

“The emperor thought that it was a precious gift given by the god[s], and asked all the craftsmen in the capital city to learn the making methods and imitate it. Therefore, [in] the beginning, all cloisonné wares were owned by the royals. Cloisonné became a courtly art and an important part [of] Chinese royal culture,” according to Top China Travel.

When the Yuan Mongol army conquered West Asia in the late 13th century, they brought with them the enamels popular in the region. Craftsmen who were taken as prisoners are believed to have contributed to the cloisonné tradition back in China. In his book Ge Gu Yao Lun, author Cao Zhao mentions cloisonné as “Dashi” or “Muslim” ware.

During the Ming Dynasty (1368-1644), cloisonné work in China reached its peak. Under emperor Jingtai’s rule, cloisonné came to be known as “jingtai blue,” since the enamelware from the period tended to be blue in color. During this time, there was a major innovation in cloisonné work as craftsmen increasingly started using white porcelain as the substrate material.

“It combined their skill with making the translucent, light, and strong white porcelain that had been highly prized abroad for many centuries with the Western technique of decorating with cloisonné artwork. Porcelain withstood the high heat firing needed to produce the layers of glass enamel,” according to China Highlights.

During the Qing Dynasty (1664-1911), the quality of cloisonné work is said to have dropped. However, gold objects decorated with cloisonné art were very much valued in the court. Today, the fusion of modern technology with cloisonné techniques has allowed craftsmen to create artwork that is very colorful.

The first step in the traditional cloisonné manufacturing process involved hammering the model in which copper pieces were transformed into various designs and shapes. These pieces were then joined together under high temperatures. In the next step, the artisan would curve and pinch the copper filigree into delicate flower patterns, which were pasted into copper molds. They were heated at a temperature of up to 1,650°F, firming the metal.

The next step was enamel filling. “Through this interesting procedure, the cloisonné wears a colored wrap. Handicraft specialists fill enamel glaze into lattices formed by fine-spun filigrees. Just one filling is not enough — the filigrees extrude, and the surface is dull. They have to fuse powdery glaze in the smelter at 800 degrees Centigrade [1,472 degrees Fahrenheit], then take the object out and repeat the process three or four times,” according to Travel Guide China.

The object was then polished in order to make the surface smooth. Artisans used to polish the works about three times using things like charcoal and grit. In the final stage, acid pickling was done to remove impurities and stains on the object.