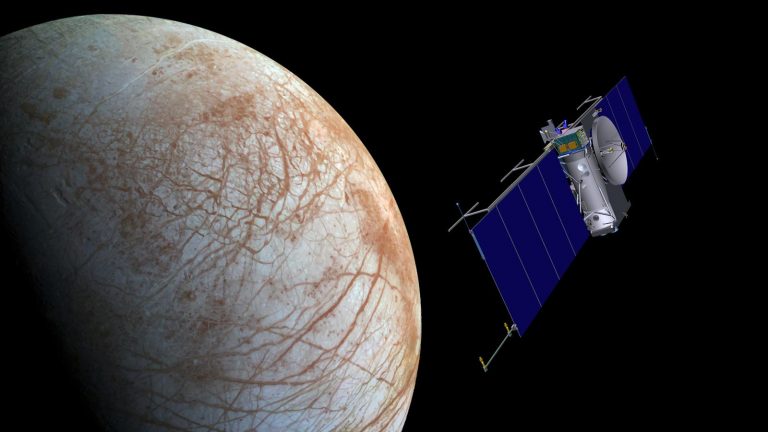 Artist concept of NASA's Europa mission spacecraft approaching its target for one of many flybys. (Image: NASA / JPL-Caltech)

It’s “almost a racing certainty” there’s alien life on Jupiter’s moon Europa — and Mars could be hiding primitive microorganisms, too. That’s the view of leading British space scientist Professor Monica Grady, who says the notion of undiscovered life in our galaxy isn’t nearly as far-fetched as we might expect.

Professor Grady, a Professor of Planetary and Space Science, says the frigid seas beneath Europa’s ice sheets could harbor “octopus”-like creatures. Meanwhile, the deep caverns and caves found on Mars may also hide subterranean life-forms — as they offer shelter from intense solar radiation while also potentially boosting remnants of ice. Professor Grady was speaking at Liverpool Hope University, where she’s just been installed as Chancellor, and revealed:

“When it comes to the prospects of life beyond Earth, it’s almost a racing certainty that there’s life beneath the ice on Europa. Elsewhere, if there’s going to be life on Mars, it’s going to be under the surface of the planet. There you’re protected from solar radiation.

“And that means there’s the possibility of ice remaining in the pores of the rocks, which could act as a source of water. If there is something on Mars, it’s likely to be very small — bacteria. But I think we’ve got a better chance of having slightly higher forms of life on Europa, perhaps similar to the intelligence of an octopus.”

Europa is a potential source of life

Professor Grady isn’t the first to pinpoint Europa as a potential source of extraterrestrial life. And the moon — located more than 390 million miles from Earth — has long been the subject of science fiction, too. Europa, one of Jupiter’s 79 known moons, is covered by a layer of ice up to 15 miles deep — and there’s likely liquid water beneath where life could dwell. The ice acts as a protective barrier against both solar radiation and asteroid impact.

Meanwhile, the prospect of hydrothermal vents on the ocean floor — as well as sodium chloride in Europa’s salty water—also boosts the prospects of life. As for what’s beyond the Milky Way, Professor Grady says the environmental conditions that led to life on Earth are “highly likely” to be replicated elsewhere. The expert, a resident at the Open University who’s also worked with the European Space Agency (ESA), adds:

“Our solar system is not a particularly special planetary system, as far as we know, and we still haven’t explored all the stars in the galaxy. But I think it’s highly likely there will be life elsewhere — and I think it’s highly likely they’ll be made of the same elements. Humans evolved from little furry mammals that got the opportunity to evolve because the dinosaurs were killed by an asteroid impact.

“That is probably not going to happen on every planet — but it’s at least possible based purely on a statistical argument. Whether we will ever be able to contact extraterrestrial life is anyone’s guess, purely because the distances are just too huge. And as for so-called alien ‘signals’ received from space, there’s been nothing real or credible, I’m afraid.”

During the summer this year, at least three separate missions will be launched to Mars. The ExoMars 2020, which launches in July, is a joint project from the European Space Agency (ESA) and the Russian space agency, Roscosmos. The Mars 2020 mission is NASA’s new rover, planned to touch-down on the Red Planet in February 2021. Meanwhile, the Hope Mars Mission is a planned space exploration probe, funded by the United Arab Emirates, which is set to launch in the summer.

And Professor Grady says it’s not just Martian “viruses” being brought back to Earth that are a concern, the prospect of us contaminating the planet with our own bugs is also paramount. Prof. Grady — a member of the Euro-Cares project designed to curate samples returned from missions to asteroids, Mars, the Moon, and comets — reveals:

“Space agencies from across the world are working to eventually send humans to Mars. But if you want to do that you need to at least have a jolly good shot of bringing them back again. And so one of the big steps in that process is actually to bring a rock back from Mars. The NASA mission will collect samples in tubes and leave them on the surface of Mars.

“And then, in 2026, ESA will send another mission to Mars to collect those samples and put them in orbit around the red planet. Then, another spacecraft will come and collect that capsule. It’s about breaking the chain of contact between Mars and the Earth, just in case we bring back some horrendous new virus.

“But we also don’t want to contaminate Mars with our own terrestrial bugs. And the tricky part will come when we prepare to send the first people to Mars. Currently, we boil all the equipment in acid, or we heat it to very high temperatures, before we send it off. But humans are, shall we say, a bit resistant to those treatments! All of these protocols for sterilisation have still got to be determined.”

Meanwhile, Professor Grady says that by looking at the bigger, inter-planetary picture, Earth’s own ecological situation is brought into sharp focus, adding:

“We could be all there is in the galaxy. And if there’s only us, then we have a duty to protect the planet. I’m fairly certain we’re all there is at our level of intelligence in this planetary system. And even if there are octopuses on Europa, that doesn’t give us a reason to destroy our planet.”

Professor Grady has also been looking at the bigger picture by focusing on the minutiae — a single grain of the rock, the size of a full stop. This speck was brought to Earth in 2010 by the Japanese “Hayabusa’ mission — where a robotic spacecraft was sent to the near-Earth asteroid ‘25143 Itokawa’ in order to collect a sample. By analyzing this ‘world in a grain of sand,'” she hopes to unlock mysteries of the universe. She added:

“When we look at this grain, we can see that most of it is made up of silicates, but it’s also got little patches of carbon in it — and that carbon is extra-terrestrial, because it also contains nitrogen and hydrogen, which is not a terrestrial signature. In this one sample, a few microns in size, we can see that it’s been hit by other bits of meteorite, asteroid, and interstellar dust.

“And with modern equipment you can start to untangle, not just a grain, but the little bits inside this tiny grain. It’s giving us an idea of how complex the record of extra-terrestrial material really is. It also tells us the importance of analyzing the tiny things when it comes to the bigger picture.”

Provided by: Liverpool Hope University [Note: Materials may be edited for content and length.]