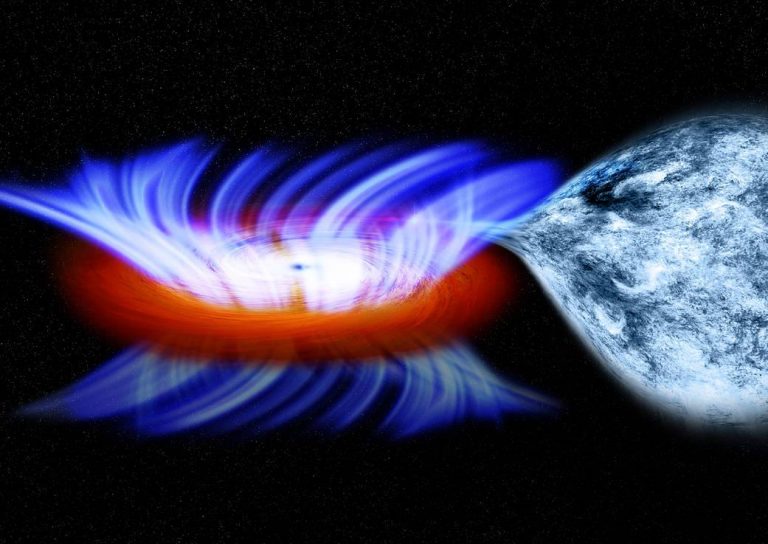 This artist's impression shows a binary system containing a stellar-mass black hole called IGR J17091-3624, or IGR J17091 for short. The strong gravity of the black hole, on the left, is pulling gas away from a companion star on the right. This gas forms a disk of hot gas around the black hole, and the wind is driven off this disk. (Image: NASA / CXC / M.Weiss)

When a black hole chews up a star, it produces visible light or X-rays, but astronomers have almost never detected both types of radiation. Astronomer Peter Jonker (SRON/Radboud University) and his colleagues have now spotted a number of captured stars with an X-ray telescope a few years after they were discovered in optical light. It appears that black holes all dine in the same way after all, while the mood lighting varies according to a fixed pattern. Their study is published in the Astrophysical Journal.

All across the universe, gigantic black holes are lurking in the dark within the centers of galaxies. Like an ambush predator, they patiently wait for unsuspecting stars to pass, and use their overwhelming gravity to pull them apart into a spaghetti strand and finally swallow them up. Astronomers sometimes see this spectacle in visible light, sometimes in X-rays, but almost never in both types of light at the same time. Do black holes have two different ways of eating a star?

Stars go from visual to X-ray in black holes

Astronomer Peter Jonker (SRON/Radboud University) and his international colleagues have now observed a number of sources with the Chandra X-ray telescope that were originally identified in the optical band a few years earlier. It appears that a star, in the process of being devoured, first radiates visible light and subsequently emits X-rays.

So black holes do have a common eating behavior, while the mood lighting during dinner changes according to a fixed pattern, from gentle white to pale, bright X-rays. Jonker’s finding could soon be tested by combining data from the recently launched X-ray satellite eROSITA — a predecessor of Athena — and telescopes that sweep the sky collecting visible light, such as the BlackGEM telescope, which is currently being installed in Chile under the supervision of Radboud University.

A captured star is stretched into such a long string that it encounters itself after a full orbit around a black hole, like a snake biting its tail. That collision causes the string to lose altitude and fall toward the black hole. Jonker has two possible explanations for his theory that visible light and X-rays are both released, strictly in that order.

The first option is that visible light emission is caused by the energy released during the collision, and we see the X-rays because potential energy is lost during the drop toward the black hole. The stream of shredded stellar gas starts to glow like a so-called black body, with a characteristic curve as a spectrum that peaks in soft X-rays.

The second option is that the collision itself emits X-rays, but a dense cloud emerges that absorbs the X-rays and re-emits them as visible light. When enough star material has disappeared, the cloud becomes thin enough to allow the X-rays to pass through, including the X-ray radiation as a result of the plunge with associated loss of potential energy.

A consequence of Jonker’s theory is that there is a connection between the rotation of black holes and the volume of X-rays emitted by stars while being eaten. Whether black holes rotate is currently unknown. If eROSITA observes hundreds of spaghetti strands every year, this could confirm that black holes are rotating. If only a few are detected each year, it would indicate stationary black holes.

Provided by: Erik Arends, SRON Netherlands Institute for Space Research [Note: Materials may be edited for content and length.]