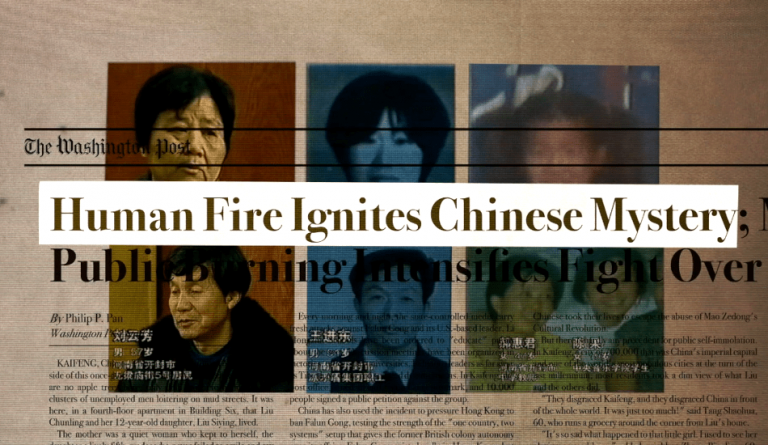 ‘Ask No Questions’ shows the dark side of the Chinese government and how they run a vicious propaganda campaign to discredit the spiritual practice of Falun Gong. (Image: Screenshot via YouTube)

Ask No Questions is a documentary that was screened at the Slamdance Film Festival last month. Directed by Jason Loftus and Eric Pedicelli, the documentary shows the dark side of the Chinese government and how they run a vicious propaganda campaign to discredit the spiritual practice of Falun Gong.

The documentary ‘Ask No Questions’

“The film spotlights an incident where five people attempted to self-immolate themselves on Jan. 23, 2001, in Tiananmen Square. The Chinese Communist Party, through an ongoing media blitz, claimed these five people were Falun Gong followers, and attempted to show them as fanatical, cultish, and threatening to the Chinese way of life,” according to Park Record.

Support for Falun Gong from the international community also diminished after the incident as the practitioners were seen as “dangerous.” Falun Gong practitioners like Loftus ended up on the defensive due to this. However, when he investigated the immolation tape, he started seeing some inconsistencies in the official narrative. For instance, China was claiming that the self-immolated people were all Falun Gong practitioners. But these people had no history of ever practicing Falun Gong.

In the documentary, we hear the story of a man named Ruichang Chen, who worked for a top TV channel for almost 30 years. He was a Falun Gong practitioner. At the TV station, he was tasked with ensuring that the government propaganda being spread through the channel was more persuasive and impactful.

After the self-immolation incident, Chen was rounded up by officials and tortured severely after he refused to accept the official narrative. They also tried to make him renounce Falun Gong. At one of the state brainwashing centers, he was made to sit in front of a TV for 8 hours every day for 22 days with his eyes forced open and the volume turned all the way up. Despite the torture, he never gave up Falun Gong. He was eventually released.

In the documentary, Chen reveals how the Communist Party crafts propaganda to turn people’s opinions about a particular subject in their favor. The trick, he says, is not about a single piece of news or how it is fabricated. Instead, it is about a relentless series of news targeted at people’s emotions in such a way that they end up only looking at things from an emotional perspective. “The possible (likely) framing of Falun Dafa did not just impact practitioners. The world’s subsequent acceptance emboldened the CCP to apply such tactics against the Uyghurs in East Turkestan, and it is already starting to roll them out in Tibet,” according to The Epoch Times.

A recent report by Minghui, an organization representing the Falun Gong community worldwide, states that 96 practitioners were killed by Chinese officials in 2019. This brings the total confirmed death toll of Falun Gong practitioners to 4,363 at the end of last year. Fifty-three of the 96 victims were female. Nineteen people died while in police custody, just a few hours after they were arrested. Independent investigators say the number of deaths is far greater than these figures.

“One 41-year-old woman, Ms. Li Yanjie, fell to her death on December 7, 2019, while trying to escape with her husband from the window of her sixth-floor apartment the police were entering. They used a rope made by tying several bedsheets and curtains together. The rudimental rope broke. Her husband was able to survive the fall,” according to Bitter Winter.

Most of the victims came from the province of Shandong, which recorded 16 deaths. Heilongjiang saw 11 deaths and Liaoning came third with 10 deaths. Many people died in their homes from exhaustion after being subjected to imprisonment and torture for a prolonged period, often lasting several years.

The persecution of Falun Gong has been one of the worst human rights abuses during the last two decades. The fact that it is still continuing to this day, with whole families tortured and abused, is one of the greatest tragedies of the Chinese people. And one of the greatest crimes of the ruling Chinese Communist Party.