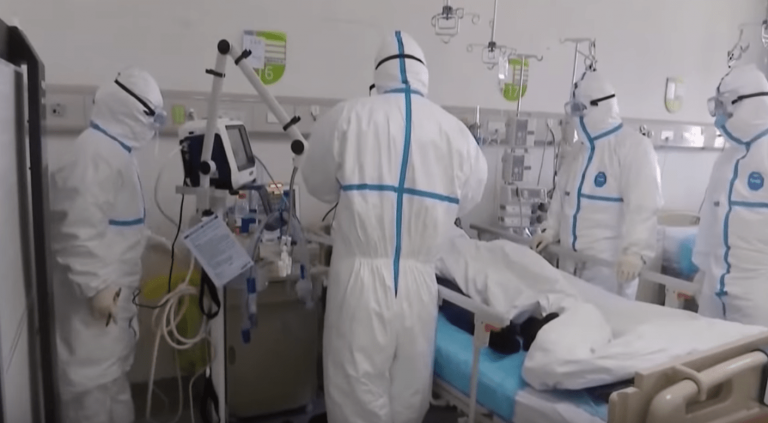 Chinese officials have given figures for health workers infected with coronavirus (COVID-19), amid concerns about shortages of protective equipment. (Image: YouTube/Screenshot)

Numbers continued to climb after the government changed the criteria by which it tracks confirmed cases. China on February 14 reported 5,090 new coronavirus (now renamed COVID-19 by the World Health Organization) cases and 121 new deaths in the previous 24 hours.

The authorities said a total of 63,851 people have been infected by the coronavirus (COVID-19) and at least 1,380 people have been killed by the disease. Most of the cases have occurred in Hubei, the center of the outbreak, which recorded 4,823 new cases and 116 deaths over the same period.

The tally in Hubei jumped most dramatically on February 13 after authorities changed the diagnostic criteria for counting new cases. The government now takes into account cases diagnosed in clinical settings, including the use of CT scans, and not just those confirmed with specialized testing kits. However, the World Health Organization said there was no major shift in the virus’s pattern of mortality or severity, despite a spike in cases in Hubei Province.

What is the situation for medical workers?

Medical workers, already working round the clock, face a shortage of personal protective equipment such as masks, gowns, and safety goggles. They have resorted to begging from friends, putting out frequent calls for donations, and using tape to patch up torn masks and gowns. Many doctors and nurses there say they eat only one meal a day because going to the restroom means removing and discarding safety gowns that they would not be able to replace.

What is happening on the Diamond Princess?

Japanese health officials, along with Princess Cruises, have announced an additional 44 positive cases of coronavirus (COVID-19)  among passengers aboard the quarantined Diamond Princess cruise ship. The number of infected passengers totaled 218 as of February 13.

The vessel is in quarantine in Yokohama, in southern Japan. Not all the 3,700 people on board have been tested yet. People with the virus are taken to hospitals on land to be treated, while those on board are largely confined to their cabins. However, Japanese officials said it would allow those aged 80 or over who have tested negative for the coronavirus (COVID-19) to disembark. Health Minister Katsunobu Kato said they could be allowed off the ship as early as February 14, but would have to stay in accommodation provided by the government, the Japan Times reported.

Meanwhile, another cruise ship — the Westerdam, carrying more than 2,000 people — docked in Cambodia after being turned away by ports in Japan, Taiwan, Guam, the Philippines, and Thailand despite having no sick patients on board. The Westerdam was finally able to dock in Sihanoukville, Cambodia.

A Hong Kong clinic designated to treat suspected coronavirus (COVID-19) cases suffered a second arson attack early on February 14, officials said. A police spokeswoman said it had occurred overnight and left a door charred. The first attack, on February 8, damaged an air-conditioner. No one was injured in either attack.

The clinic is about four miles from an apartment building where dozens of residents were evacuated earlier this week after two residents on different floors were found to be infected, raising new fears about how the virus spreads.

There were 56 confirmed cases in the city as of February 14. Fearing a wider outbreak, residents have been staging small-scale protests at several clinics assigned to treat people with mild symptoms of the virus. Late last month, the government shelved a plan to turn an unoccupied housing project into a quarantine facility after protesters set a fire in the lobby.

As public anger and anxiety mount, the Beijing-backed government has been accused by many residents of not doing enough to contain the spread of the virus, including the refusal to quickly order a complete shutdown of the border with Mainland China. The authorities have gradually restricted arrivals from Mainland China over the past few weeks.

Blood plasma from survivors could help create a treatment

A senior health official in Wuhan, China, the center of the outbreak, has called on residents who have recovered from the coronavirus (COVID-19) to donate blood plasma, believing their naturally produced antibodies could be used to treat patients who are still sick. Dr. Zhang Dingyu, the director of the Jinyintan Hospital in Wuhan, made his appeal after Chinese researchers said they believed such antibody treatments could help people recover from the virus.

The government is currently prescribing a combination of anti-viral drugs and traditional Chinese medicine. But on February 13, China National Biotec Group, a state-owned company under the Ministry of Health, said it found that administering a round of human antibodies from the survivors to more than 10 critically ill patients caused inflammation levels to drop significantly after 12 to 24 hours of treatment. The company called the use of plasma “the most effective method, which can significantly reduce the mortality of critically ill patients.”

The economic impacts of the virus