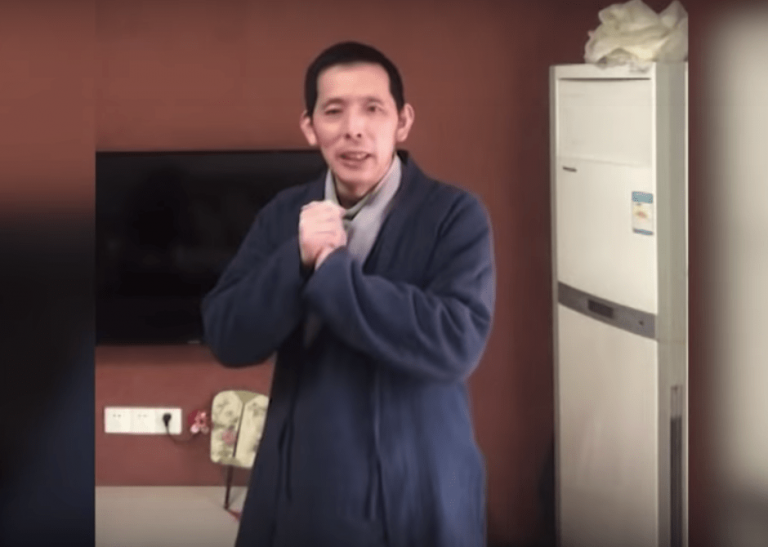 Fang Bin is second Chinese citizen journalist to vanish while reporting from the coronavirus epicenter. (Image: Screenshot via YouTube)

As Chinese authorities struggle to contain the COVID-19 coronavirus, they’re also working to silence the growing number of critics of the government’s crisis plans. Censors have been erasing critical social media sites. At least two outspoken citizen journalists have disappeared. Chen Qiushi and Fang Bin are among those whose whereabouts are unknown.

Chen Qiushi arrived in Wuhan on the eve of the Chinese New Year. He took videos of hospital scenes and Wuhan streets. On the evening of February 6, Chen went to the makeshift “square cabin” hospital and since then, he has been missing. Chen’s friend tweeted: “The media contacted several local police stations in Wuhan but there is still no news of Chen.”

His friends contacted more than a dozen hospitals in Wuhan but still could not find where Chen was. There was an ambiguous notice put up at the Qingdao police station; where is he and what is the current situation? Even his mother does not know.”

Chen Qiushi knew it would be dangerous to go to Wuhan. He went to report on the situation. Now, there is no news of him. On February 9, Chen Qiushi posted a video online to say he was safe and showed eight characters in calligraphy that read: “The whole nation resists, return the administration to the people.” He was then arrested on February 10 in Wuhan for speaking out.

Fang Bin, a Wuhan citizen, was dissatisfied with the Chinese Communist government for covering up the truth about the coronavirus epidemic. He went to funeral parlors and hospitals to conduct field investigations and posted the videos he took online as evidence. He was arrested but released by the Chinese Government due to tremendous pressure from the public. But then Bin was repeatedly harassed.

Watch this video of the disappearance of citizen journalists Chen Qiushi and Fang Bin and the lack of transparency by government authorities.

In a self-made video on February 7, Fang called on everyone to resist the tyranny of the Chinese Communist Party (CCP). He told the people: “My national mutual assistance and self-rescue campaign has been upgraded to the ‘National Rebellion’ campaign. The cruelty of the tyrant is far greater than the cruelty of viruses. Everyone must be confident that we can eradicate tyranny.”

On February 8, Fang continued to call for resistance to the tyranny of the CCP on YouTube. He said: “The CCP’s tyranny is so evil it can no longer exist. China is the land of the Chinese people; how can the devil be allowed to roam free? Don’t retreat; there is no way for us to retreat!”