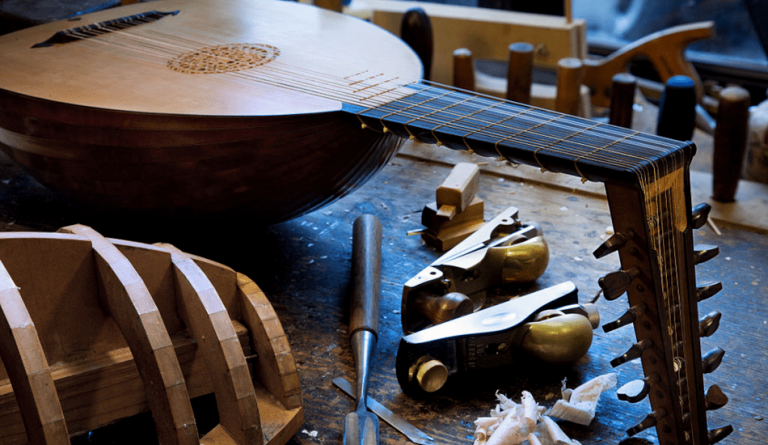 When it comes to defeating 150,000 soldiers, you might think that a large force made up of at least an equal number of soldiers would be required. But a Chinese General named Zhuge Liang (181 to 234) took care of this task with a musical instrument — a lute.

Liang lived during the chaotic Three Kingdoms period. He served Liu Bei and later his successor Liu Shan of the Eastern Han Dynasty. In fact, it was Liang who suggested to them the idea of breaking away from the Han and carving out their own kingdom. During the course of several wars, Liang earned a reputation as a brilliant military general.

His most famous battle took place in Xicheng when he dispatched his large army to a faraway camp. Liang only had a hundred men in the town. A few sentinels approached Liang and warned that Sima Yi from the Wei state was marching to Xicheng with an army of 150,000 soldiers. Liang and his hundred soldiers stood no chance. However, Liang was crafty and decided to bluff.

“Liang ordered his troops to take down their flags, throw open the city gates, and hide. He himself then took a seat on the most visible part of the city’s wall, wearing a Taoist robe. He lit some incense, strummed his lute, and began to chant. Minutes later, he could see the vast enemy army approaching, an endless phalanx of soldiers. Pretending not to notice them, he continued to sing and play the lute,” according to The New DC Times.

When Sima Yi saw his rival playing the lute atop the gates, he stopped. Yi thought that Liang looked too comfortable and at ease in a situation where he would have no doubt received a warning about the approaching army. So why would he be playing the lute? Sima Yi reasoned that Liang was staging this display in order to lure his army inside the city and slaughter them. He eventually asked his army to backtrack. Through sheer cunning and a little bit of luck, Liang had managed to avoid a slaughter.

Just like Liang’s lute strategy, there are many examples of one side during combat implementing a ludicrous tactic to gain victory over the enemy or protect themselves. In the Battle of Pelusium that took place in 525 B.C., the Persian leader Cambyses II used cats to defeat the opposing Egyptian army. The Egyptians held cats in high esteem, considering them sacred. Knowing this, Cambyses II asked his army to paint their shields with images of cats. He also brought hundreds of cats into the battle. Seeing the “feline army,” the Egyptians refused to fight and ended up being defeated.

When the Romans were facing the threat of an invasion from Hannibal, they resorted to lighting pigs on fire and sending the creatures into the battlefield. When the elephants in Hannibal’s army saw the flaming pigs running toward them, they got scared and scattered. King John of England (1166 to 1216) also used flaming pigs during his siege of the Rochester Castle. Several others have used this tactic in sieges. Enemy forces would dig tunnels under a castle and set loose some burning pigs, which would set the supports on fire and collapse the castle. Poor pigs, though.