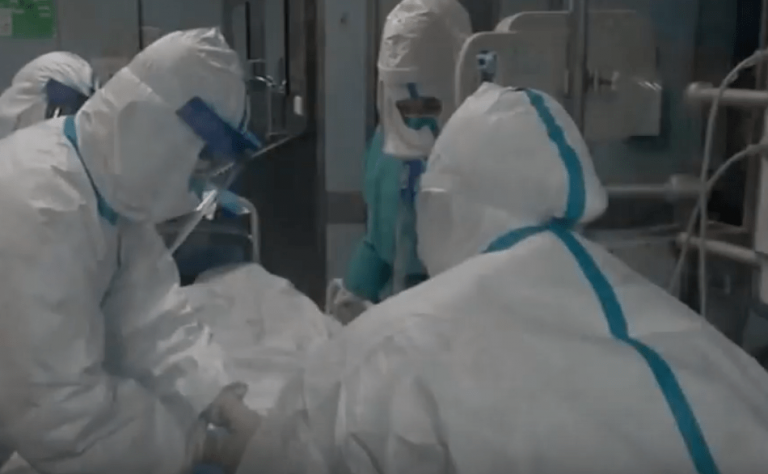 China reported 1,886 new COVID-19 cases and 98 more deaths in its daily update on the outbreak on February 18, bringing the death toll in Mainland China to 1,868, with 72,436 confirmed cases. (Image: YouTube/Screenshot)

Director of a hospital in Wuhan dies from the virus

A respected neurologist who was director of Wuchang Hospital in Wuhan died February 18 after contracting COVID-19, despite a “full effort rescue,” according to Wuhan’s municipal health commission. Liu Zhiming, 51, became the most prominent victim of the outbreak and follows that last week of a nurse, Liu Fan, from the same hospital. A total of eight front-line health workers have died, while as many as 3,000 have been infected with the coronavirus.

The Chinese Center for Disease Control and Prevention released a study on February 17 that looked in depth at the COVID-19 epidemic on the Mainland that has infected more than 72,000 and killed over 1,800.

The report examined 72,314 unique patient records, including 44,672 confirmed cases as of February 11. It found around 81 percent of the confirmed cases were said to be mild, 13.8 percent were severe and 4.7 percent were critical, while information on the rest was missing.

It also suggested that people aged 60 and above were most at risk, based on the reported case fatality rate — calculated by dividing the total number of deaths by the total number of cases. Of the cases examined, about 14.8 percent of people 80 and older died.

The overall case fatality rate in the study was 2.3 percent. The study also noted that nearly half (49 percent) of the people who were in critical condition have died. Underlying, existing illnesses such as cardiovascular disease increased the chance of fatality, the report found.

What’s happening on the cruise ships?

COVID-19 has spread beyond Mainland China to countries around the globe and two cruise ships are now confirmed to have been affected.

The Diamond Princess was quarantined in the Japanese port of Yokohama on February 3, after a man from Hong Kong tested positive. Some 621 of the 3,700 people on board have since become infected.

The U.S. has begun evacuating its citizens from the vessel and on February 18, South Korea joined the list of the countries and territories also planning to get their residents out, which also includes Canada, Australia, the UK, Israel, and Hong Kong.

A second ship, the MS Westerdam, was turned away by multiple ports around Asia over fears it could be carrying the virus. It was finally cleared to dock in Sihanoukville, Cambodia, after no cases were found on board. Disembarking passengers were personally welcomed by Prime Minister Hun Sen. No one was quarantined.

However, days later, a woman who had been on the ship tested positive after arriving in Malaysia. Huge efforts are now being made to track down the passengers who have moved on to many different countries, including Malaysia and Thailand, but also further afield to the U.S. and Canada. Several countries have said they will not admit foreign visitors who were on the ship.

There are still 255 guests and 747 crew on board the MS Westerdam, while more than 400 passengers have been sent to a hotel in the capital, Phnom Penh, to await test results.

As the number of COVID-19 cases outside Mainland China continues to climb, French Health Minister Olivier Véran warned on February 18 of a possible coronavirus pandemic. While an epidemic is usually restricted to a particular region, a pandemic can affect countries around the world.

“This is both a working assumption and a credible risk,” Véran said in an interview with France Inter, a public broadcaster. Véran added that authorities were also monitoring developments in Japan, where the number of coronavirus cases jumped from 33 on February 13 to 69 on February 18. The significant rise in infections prompted a top Japanese official to acknowledge that the virus has entered a “new phase” of local transmission.

Véran sought to calm fears that France would not be sufficiently prepared for a similar scenario, even as some analysts warned that Europe’s already stretched healthcare systems could be overwhelmed with large clusters of the virus.

Moody’s says economic growth to slow across the Asia-Pacific

Moody’s Investors Service said on February 18 the coronavirus outbreak adds to other pressures on growth in the Asia-Pacific. The impact of the disease will be felt mainly through trade and tourism, the firm said, adding for some sectors, there would also be supply chain disruptions.

“This shock comes on the back of a marked slowdown in 2019 as decelerating global trade hit the region,” Moody’s said in a statement.

The firm lowered its growth forecast for China from 5.8 to 5.2 percent for 2020, which would reflect “a severe but short-lived economic impact, with knock-on effects for economies across the region.” It added that lower Chinese import demand would be the primary reason for slowing growth. Macao and Hong Kong are expected to face the biggest hit given their close economic integration with China, Moody’s said.