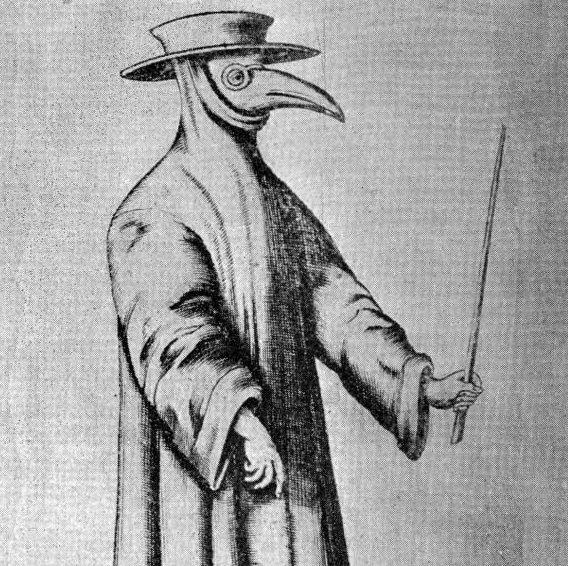 A plague doctor was a medical physician who treated victims of the bubonic plague. In times of epidemics, these physicians were specifically hired by towns where the plague had taken hold. Since the city was paying their salary, they treated everyone: both the wealthy and the poor. (Image: via allthatsinteresting.com)

The Black Death, also known as the Great Plague or the Bubonic Plague, was a pandemic that raged across the Medieval World in the 14th and 15th centuries. It quickly spread, killing at least 75 million people. It reached its peak of havoc between 1347 and 1351.

Some historians estimate that as many as 200 million people perished in countries ranging from Spain all the way to Russia, and south as far as Syria. All of Europe was affected by the plague, with France and England losing almost half of their populations. The death toll was far higher than during the Hundred Years’ War.

One of the most historically comprehensive accounts of the Black Death comes from the Cronaca fiorentina di Marchionne di Coppo Stefani (English: Florentine Chronicle of Marchionne di Coppo Stefani). Di Coppo Stefani survived the plague as it ravaged Florence. He wrote: “The symptoms were the following: a bubo in the groin, where the thigh meets the trunk; or a small swelling under the armpit; sudden fever; spitting blood and saliva (and no one who spat blood survived it). It was such a frightful thing that when it got into a house, as was said, no one remained. Frightened people abandoned the house and fled to another.”

One preacher reported to the Pope: “The strange image in the sky was the prelude of the outbreak of the plague. One hour at noon later on March 20th, 1345, the time when the three stars meet at Aquarius, will be the symbol of death.”

This prediction coincidentally matched the conclusion made by Geoffrey de Meaux the astrologist: “The comets appeared in 1315 and 1337, as well as the conjunction of Jupiter and Saturn in 1325, all predicted the following Black Death.” Philosophical thought based on Aristotle’s teachings and others pointed to comets as indicators or predictors of future events.

The Great Plague spread like wildfire throughout Europe, and peoples’ reactions varied. Some seized the time to enjoy their final pleasures, some prayed to God, some left the secular human society, and some tended to the sick regardless of the risk of catching the disease.

In fact, many people at the time believed that humankind was deeply sinful. Their Original Sin could not be forgiven and they continued piling on new sins throughout their lives. Hence, the Black Death was seen as punishment from God.

However, the frightened people did not reflect on their faults. Instead, many people adopted extreme tactics to avoid catching the disease. Among other attempts, many groups adopted the practice of severe self-flagellation. Believing that punishing themselves would help them avoid God’s judgment, flagellants fiercely whipped themselves.

But that was not what God wanted and these actions had no effect on the spread of the Great Plague. The Church during the Middle Ages had become preoccupied with formalities, money, politics, and power. During the outbreak of the Black Death, the clergy were busy protecting themselves, isolating themselves from the centers of the outbreak, or escaping to other locales. Many felt that they fell very far short of the duties of their calling.

Miracles during the Black Death

The Great Plague does not seem to have targeted any specific group of people. The most simple and effective way to prevent the spread of the infection was to set up a quarantine. However, there were some notable exceptions. A witness to the much earlier Plague of Justinian said: “Some people escaped from the epidemic cities, and they remained healthy. But they spread the disease to the uninfected crowds. There were some who lived amongst the infected. They were not only in touch with the infected people but also looked after the dead however they were not infected at all.”

“Some people lost their children and family so they wanted to follow them in death. Trying to get infected, they stayed close to the sick. However, they still remained healthy despite their effort to the contrary.”

According to Procopius, once a healthy person got infected and had a low-grade fever, he would hallucinate images of devils and ghosts. Another record from John gives us a similar account: First, the illusions appeared, and then a black ghost without a head appeared. The person would shortly die after the swollen lymph nodes or black buboes emerged.

Western civilization understood the plague as a punishment from God. Ancient Chinese divine culture considers that humankind is  “at one with Nature.” If society is in moral decline and turns away from the divine, it will be punished. Plagues and earthquakes are forms of punishment accepted by the ancients as sent by God.

The similarity to plagues in ancient China

According to historical records: During the plague of the Ming Dynasty of China, there were two greedy thieves who planned to steal from the homes of the dead. One thief stole the valuables and threw them up to his accomplice, who caught them on the roof. At the exact moment when the thief on the roof touched the stolen goods, both thieves suddenly died.

As for the plague that spread at the end of the Qing  Dynasty, according to Dr. Wu Lien-the, the pathogen came from groundhogs, also known as woodchucks — a large type of ground squirrel. At that time, many fraudulent businessmen, because of its similar color, sold groundhog fur as very expensive sable fur. In 1910 when the plague broke out in North-Eastern China, there were 2.5 million groundhog fur products saturating the market.