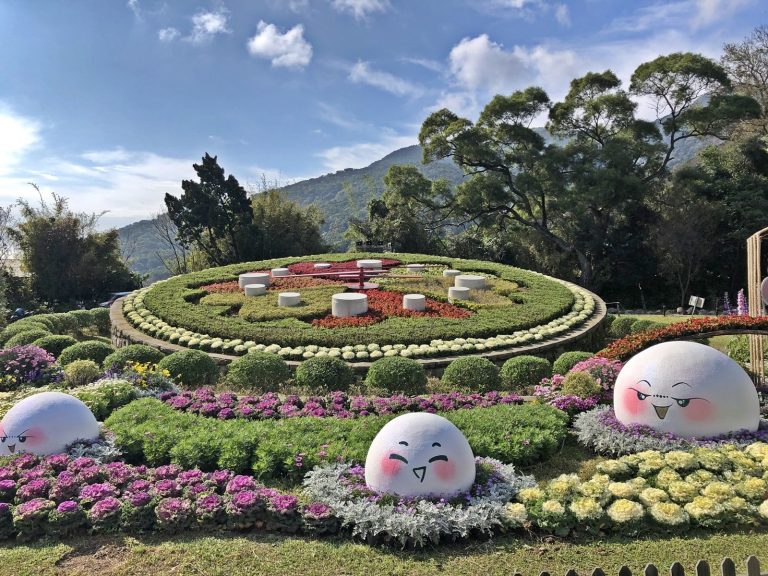 The Flower Clock is an iconic location to photograph in Yangming Park. (Image: Billy Shyu / Nspirement)

Every year around this time when spring is in full swing, an estimated 1 million people from home and abroad flock to Yangmingshan, also known as Mt. Yangming (陽明山), or Grass Mountain (草山). There, they partake in the Yangmingshan Flower Festival (陽明山花季).

Please watch the following video of the 2020 Yangmingshan Flower Festival in Taiwan.

Situated in the north of Taipei Basin, Yangmingshan is about 17 kilometers away from downtown Taipei and is Taiwan’s 3rd national park. With an abundance of flora and fauna, the national park has earned its reputation as an urban forest and Taipei’s garden.

The 2020 Yangmingshan Flower Festival kicked off on February 15 and will run for 37 days until March 22 to showcase the natural beauty of Yangmingshan. To enhance the festive atmosphere, a variety of activities are held at different times and locations during this annual event, such as the Grass Mountain Carnival (草山嘉年華), Flower Dance Competition (花舞大賽), and Cherry Blossom Explorer King (櫻花探險王), Yangmingshan Flower Festival Art Installation-Nest Surrounding (陽明山花季裝置藝術：巢境), etc.

With the theme of “Cherry Blossoms Are Magnificent Because of You (櫻你而在),” there are various varieties of cherry blossoms blooming in Yangmingshan during the Festival. The most commonly seen varieties are the Taiwan cherry (山櫻花), Yae-Zakura cherry (八重櫻), Showa cherry (昭和櫻), Yoshino cherry (吉野櫻) and Fuji cherry (富士櫻 or 寒櫻).

In fact, a plethora of other kinds of beautiful flowers, in particular Hirado azaleas (平戶杜鵑), are blooming in Yangmingshan Park during this time of the year. They add plenty of color to the natural landscape of the park.

The first wave of cherry blossom in Yangmingshan is Taiwan cherry flowers. They are indigenous to Taiwan and are the most commonly seen variety of cherry on the island, which usually starts blooming in January and ends in March. With double layers of petals, the Yae-Zakura cherry is the second wave of cherry trees that blossom during the annual event, which will be followed by Showa cherries and Yoshino cherries in March.

Another great spot to view cherry blossoms near Yangmingshan is private property along a small lane of Pingjing Street (平菁街) in Taipei City’s Shilin District. What visitors can see on Pingjing Street are Fuji cherry blossoms, which are a hybrid of the Taiwan cherry and Japanese cherry. They are also called “Winter Cherries (寒櫻),” as they usually bloom earlier than other spices.

Apart from cherry blossoms, another highlight of Yangmingshan during this time of the year is the calla lily farms (海芋) in Yangmingshan’s Zhuzihu area (竹子湖), also known as the Bamboo Lake area.

Once voted as 1 of the 10 must-see spots in Yangmingshan in an online survey, Zhuzihu has a few dozen calla lily farms open to the public. Visitors not only can take in a snow-white sea of calla lilies, but they can also pick calla lilies in the farms by themselves, and enjoy local delicacies at the restaurants run by farmers there.