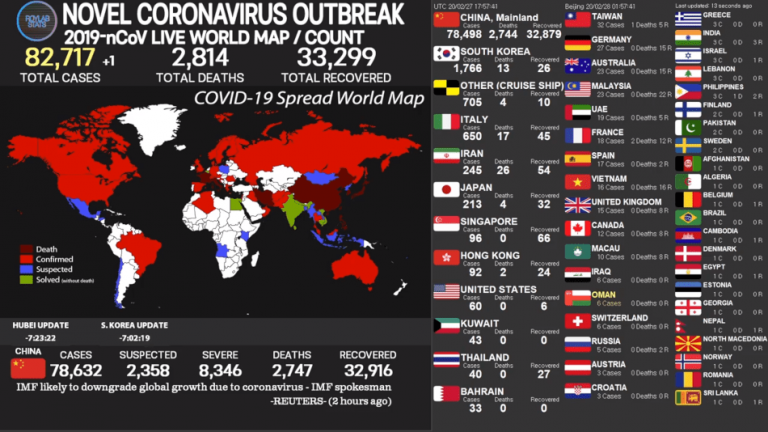 The coronavirus epidemic has spread to at least 67 countries and regions. (Image: Screenshot / YouTube)

Multiple cases of a flu virus leading to pneumonia broke out in Wuhan, China, last December. The pathogen behind the outbreak was identified as a novel coronavirus on January 8 this year by the World Health Organization (WHO), who are calling the spread a global public health emergency.

As a strain of the SARS (Severe Acute Respiratory Syndrome) virus, the WHO temporarily named this virus 2019-nCoV on January 13 while the International Committee on Taxonomy of Viruses (ICTV) have now formally classified this as SARS-CoV-2.

Some think that the source could be linked to bats due to SARS-CoV-2 having a very high similarity to bat coronavirus, although coronaviruses have been identified in farm animals, including chickens, since the 1970s so this is not conclusive without further research.

The spread of the Wuhan pneumonia epidemic has been out of control in China and as medical resources are extremely scarce in the epidemic center, many patients cannot be diagnosed and treated. The cross infection rate resulting from this lack of medical care and limited tests for the virus has caused the number of cases to soar as families infect each other and communities become a fertile breeding ground while they desperately wait for aid.

In China, more than 80 cities have implemented a system of closed management quarantine by putting cities off limits to movement in and out of the affected areas, including first-tier cities such as Beijing and Shanghai.

It is commonly understood that the number of infected people in China is over 100,000, much greater than that of the official statistics, which puts the number of active cases at around 78,000. The way that China is testing for the disease has changed, so it is possible that the true scale of the outbreak is unknown.

Scientists have also raised concerns about the data being reported by China because it excludes patients who have tested positive for the virus but are not presenting with any obvious symptoms. How many of these asymptomatic patients exist is currently unknown, but they will be carriers of the disease if not formally treated and make tracking the spread through contact harder to manage.

The epidemic has spread to at least 67 countries and regions. The total death rate stands at over 3,000 according to data collected by John Hopkins University Center for Systems Science Engineering using data from the WHO, while analysis of the reported cases shows that men are more susceptible to the disease than women by 2.7:1.

So far, more than 8,000 cases have been confirmed outside China, and around 130 people have died. The United States, Canada, Japan, South Korea, Taiwan, and European countries have stepped up their evacuation protocols.

More than 60 countries and regions have adopted temporary restrictions on people leaving China, and have suspended or partially suspended their flights, causing a strain on the global economy. Chinese factories are still closed and goods made by Chinese firms are restricted for world export.

This article has been updated