How to Prepare the Delicacy ‘Dragon’s Beard Candy’ 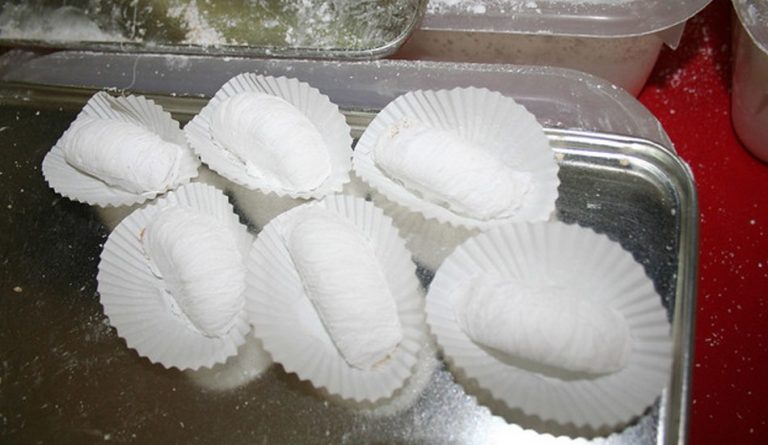 Dragon Beard Candy is a popular sweet in China. (Image: dragonbeardcandy via flickr CC BY 2.0 )

Dragon’s Beard Candy is a popular Chinese dish that is similar to cotton candy. However, while cotton candy tends to be fluffy and huge, Dragon’s Beard is thin and small. Since ancient times, preparing the candy has been considered an art form.

Several myths exist as to how Dragon’s Beard Candy came to be so named. “The most popular story tells of a Han dynasty emperor. After eating hand-pulled sugar, the white wisps stuck to his face resembled the whiskers of a dragon. Another explanation is that the candy was simply named after the mythical creature, the symbol of the Chinese emperor,” according to Atlas Obscura.

Since it was difficult to prepare, Dragon’s Beard Candy was something largely eaten only by the elites in ancient times. But today, anyone can have a go at it. The candy was banned during the Cultural Revolution period as the Communist Party saw it as something from the Han era and wanted to stamp out any links to old dynasties. As a consequence, the art of making Dragon’s Beard Candy became sparse and isolated.

But in recent decades, the popularity of the candy has peaked, with people interested in the dish due to its cultural value. The candy is considered a delicacy not only in China, but also in Singapore, Taiwan, Macau, etc.

“Dragon’s Beard Candy is highly sensitive to moisture so depending on the humidity of where you are it is would be highly recommended to consume it as soon as possible. Due to the sticky nature of the candy, it would be best to eat it in more than one bite. Otherwise, you’ll find the candy to be quite sticky inside your mouth!” according to Foodgressing.

To prepare Dragon’s Beard Candy, you will need the following ingredients — 1,000 grams of sugar, 100 grams of corn syrup, 1 container corn starch, 2 cups of water, 1 teaspoon of vinegar, and 5 drops of food dye. The equipment required includes a plastic container, silicone molds, a thermometer, a cutting board, and a scale.

First, mix the water and food dye. Heat up a pan to medium and mix the sugar, water, corn syrup, and vinegar. Avoid stirring.  When the mixture is 271°F (94°C), remove it from the heat. Let it sit until the sugar has no bubbles and looks clear. Next, pour the syrup into the silicone molds. Let it cool for about two or three hours.

Cover the work surface with corn starch to avoid the candy sticking on to it. Take out the sugar mixture and make a hole through the center of the candy. The mixture should not be too hard and must be moldable. Pull the candy, ensuring that the thickness remains consistent. When the hole gets bigger, make a figure 8, fold it over, and keep stretching. Continue doing this repeatedly until you have the desired number of strands. That’s it. The total time to make the dish is about 4 hours.