Science or Fiction: Is Gravity an Illusion? 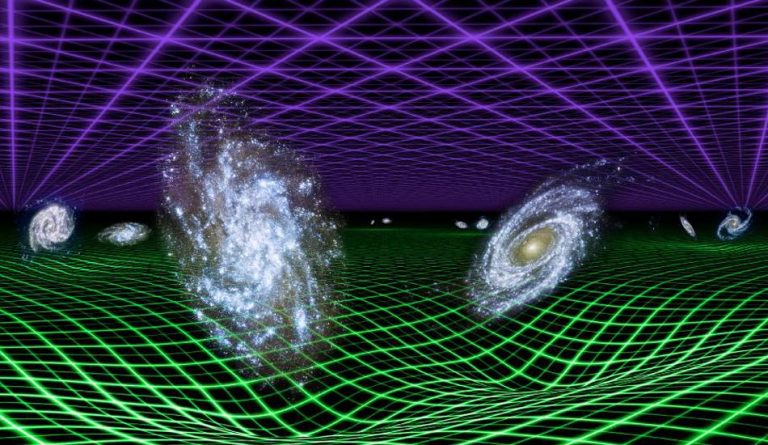 Current theory on the expansion of the universe requires the idea of gravity (green grid), which has a slowing effect, to be countered by dark energy (purple grid), which speeds it up. (Image: via NASA)

Gravity is one of the fundamental concepts in physics. Gravity is used to explain the creation and sustenance of the universe, from the smallest particle to the biggest of galaxies. In 2009, a physics professor named Erik Verlinde proposed something radical that shook the foundations of physics. He theorized that gravity does not actually exist and that it is an illusion or side effect that is the result of something that is going on at deeper levels of reality.

“In Verlinde’s view, based on string theory, quantum information theory, and the physics of black holes, gravity is an ‘entropic’ force that comes into existence as a result of ‘information associated with the positions of material bodies,’… What drives gravity is the quantum entanglement of tiny bits of spacetime information,” according to Big Think.

Verlinde’s theory has become controversial among the scientific community. Some scientists have accepted the theory with open arms and believe that it sheds new light on gravity and how we perceive it. However, a few accuse the physicist of publishing his idea way too early before sufficient data has been collected to support it. They think that Erik Verlinde’s hypothesis is too fantastical and has too little proof to be taken seriously.

However, Verlinde dismisses such concerns. “People who all too easily say that I do not have a theory, clearly do not understand how theoretical physics works. You need to elaborate and test a new idea step-by-step. We must find the correct formulations and techniques,” he said to Phys.Org.

In 2016, a group of scientists from Leiden Observatory tested Verlinde’s idea. They studied the lensing effect of gravitational fields associated with over 33,000 galaxies and discovered that the results were consistent with Verlinde’s theory. The only way to match the results with current gravitational theories is by introducing the concept of dark matter.

A year later in 2017, a study conducted at Princeton University checked Verlinde’s theory on the rotation velocities of dark matter. This time, the results were not consistent with Verlinde’s hypothesis. But even though his ideas have not been proven, Verlinde has definitely left a mark in the world of physics. His theory of gravity will surely be studied for years to come.

Variation of gravity on Earth

When people think of gravity, they usually believe that it is a force felt equally in all parts of the Earth. This is a false notion. There are some regions on our planet where the gravitational force is different from other areas. One such place is Hudson Bay in Canada. This specific region has lower gravity. According to a 2007 study, this anomaly is due to the melting of glaciers.

“The ice that once cloaked the area during the last ice age has long since melted, but the Earth hasn’t entirely snapped back from the burden. Since gravity over an area is proportional to the mass atop that region, and the glacier’s imprint pushed aside some of the Earth’s mass, gravity is a bit less strong in the ice sheet’s imprint. The slight deformation of the crust explains 25 percent to 45 percent of the unusually low gravity; the rest may be explained by a downward drag caused by the motion of magma in Earth’s mantle,” according to Live Science.

Another study published in 2011 showed that people’s perception of gravity was not uniform but differs based on their position. Imagine that a person is sitting upright and another person is lying on their side. If both of them were to view a falling object, their perception of it would be different. The person sitting upright would be more accurate in judging the fall than the person lying down.