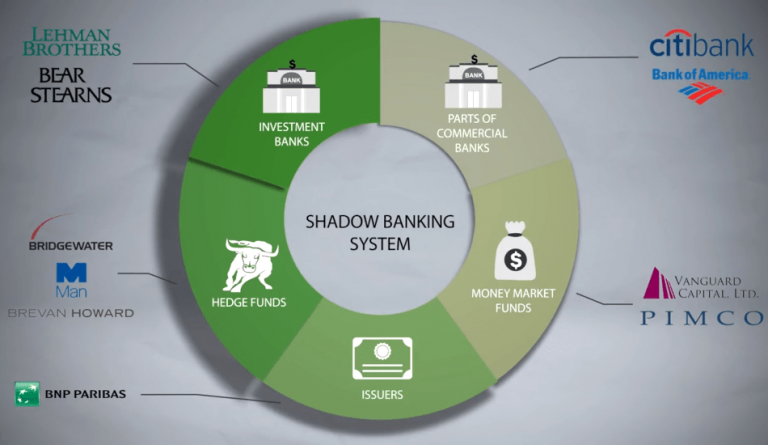 The global shadow banking sector is estimated to be worth US$52 trillion, with the U.S. accounting for around 29 percent. (Image: Screenshot / YouTube)

Shadow banking basically refers to a group of financial intermediaries that facilitate credit creation but are not subject to regulatory oversight. These can include unlisted derivatives, hedge funds, unlisted instruments, etc.

The global shadow banking sector is estimated to be worth US$52 trillion, with the U.S. accounting for around 29 percent or US$15 trillion. Since the entire sector is left unregulated, it can pose some serious risks to the financial and economic system.

Bank deposits and money market accounts are insured by the U.S. Federal Deposit Insurance Corporation (FDIC) and as such come with very little risk as far as an account holder is concerned. In contrast, money market funds, non-bank savings accounts, and other short-term instruments do not have FDIC insurance. As such, they are very risky and you can lose money in such investments very fast. These are the financial instruments that fund much of the shadow banking sector. When things take a turn for the worse, shadow banking takes the greatest hit.

“During the 2008 financial crisis, commercial banks were able to borrow money from the Federal Reserve to help weather the storm and provide account holders with access to their deposits. Shadow banking institutions cannot do that. They do not have access to short-term, government-backed funding and instead are forced to sell assets to raise cash and return money to investors,” according to Kiplinger. But since asset prices fall drastically in a financial crisis, the shadow banking institutions raise less money with the assets they possess and end up being unable to pay off their account holders.

After 2008, the U.S. passed certain regulations to avoid another such economic crisis. One of the things it did was to bring investment banks under the supervision of the Federal Reserve. This eliminated the capital buffers that had acted as an incentive for regulated banks to sell loans to investment banks.

The regulations also raised capital charges on securitized assets and repurchase agreements. This drastically reduced the size of investment banks, forcing them to cut back on the loans they provide to the shadow banking system. As a consequence, private securitization was reduced, even in areas like credit cards and car loans where such systems used to be dominant.

However, shadow banking still makes up a sizable chunk of the overall finance industry. Its growth over the past few years has been fueled by low interest rates and favorable economic conditions. At the end of 2010, shadow banking assets were valued at US$30 trillion. Given that the number now exceeds US$52 trillion, this means that shadow banking assets have grown by over 70 percent in less than a decade.

Ratings agency Fitch warns that the ascension of this type of banking might be a signal of growing systemic risk. The analysts believe that the risks could include “direct and indirect exposures faced by banks, insurance companies and pension funds, reduced financing availability for banks and non-financial corporate borrowers, and increased asset price volatility.” (Axios).

Despite posing a risk to the financial ecosystem, shadow banking does provide some benefits. For instance, it offers credit to entities that would have found it difficult to secure funds through a regulated banking system. For countries like India where some banks are unable to provide loans for big infrastructure projects due to regulatory restrictions or the burden of non-performing assets, it is the shadow banking system that has funded many such initiatives.

Secondly, shadow banks can provide the high returns that an investor is desperately seeking. Normal investment solutions may not be able to offer such high returns due to their strict risk assessment policies. In advanced economies, where returns on bank savings or investments are quite low, an individual can potentially earn a higher return through direct investments or collective investment plans offered by the shadow banking sector.