Trump’s India Visit a Win for Both Countries 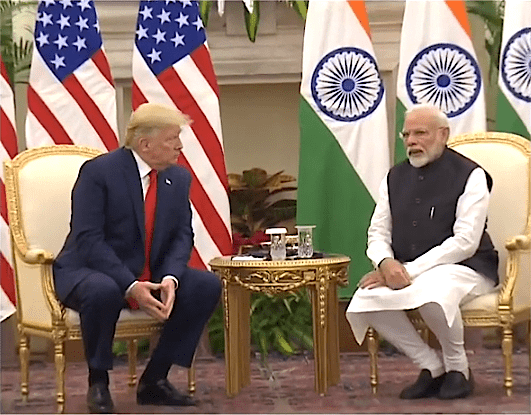 Many feel that the visit of U.S. President Donald Trump to India will upgrade the relationship between the two nations. (Image: Screenshot via YouTube)

U.S. President Donald Trump recently visited India, addressing a crowd of more than 100,000 people and announcing a military deal. Many feel that the visit will upgrade the relationship between the two giant democracies as America increasingly looks toward the country as an ally to counter China in Asia.

“This relationship is the most important partnership of the 21st century. And therefore, today, President Trump and I have taken a decision to raise our partnership to the level of a comprehensive global strategic partnership,” India’s PM Modi said (The Epoch Times).

Two deals were signed. The first deal involved India agreeing to import more LNG (Liquefied Natural Gas) from the U.S. The second one was a military deal according to which India agreed to buy US$3 billion worth of American military equipment, including MH-60 Romeo and Apache helicopters. Trump remarked that the deal will boost joint defense capabilities. He also pointed out that high-quality energy exports to the country have surged 500 percent ever since he entered office.

Trump also announced that the U.S. is committed to protecting citizens from radical Islamic terrorism. Interestingly, riots broke out in the Indian capital of Delhi during Trump’s visit where mobs of Islamists clashed with the Hindu population as they were unhappy after the government announced citizenship for non-Muslim refugees from surrounding Islamic nations like Pakistan, Afghanistan, and Bangladesh. Trump praised India for providing freedom for every religious community.

Trump also criticized the People’s Republic of China during his trip, expressing America’s concerns about the security of Huawei’s 5G technology. “During our visit we discussed the importance of a secure 5G wireless network and the need for this emerging technology to be a tool for freedom, progress, prosperity, not to do anything with where it could be even conceived as a conduit for suppression and censorship,” Trump said (BBC).

In line with recent U.S. geopolitical terminology, Trump used the term Indo-Pacific instead of Asia-Pacific. By employing the term, Washington promotes India as a major player in the region relative to China.

Trump also talked about the Blue Dot project, which is aimed at bringing together the private sectors and governments of the U.S., Japan, and Australia. The United States wants India to cooperate with the project.

The U.S. has a US$25 billion trade deficit with India. A trade deal to balance out the equation between the two countries will take considerable time. However, Trump’s visit certainly did well to mend the relationship between the two nations that were involved in a small-scale trade war last year.