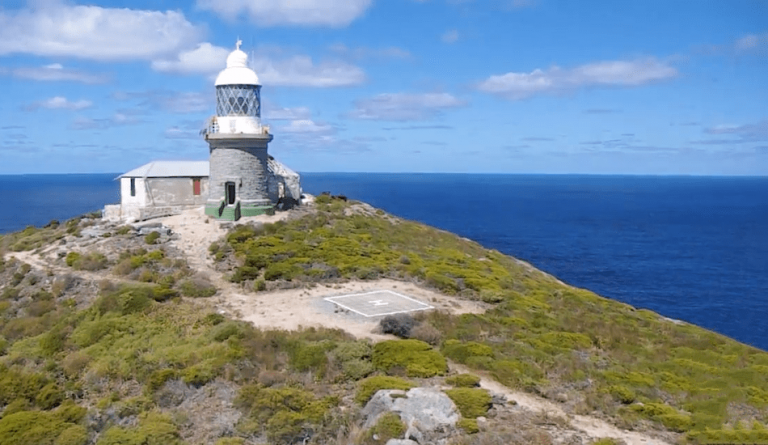 The Breaksea Island lighthouse is located on King George Sound, about 7.5 miles away from Albany, Australia. A lighthouse on the spot was built in 1858 using cast iron sheeting. It was replaced with a new cylindrical granite lighthouse in 1901 that continues to be in good condition. The Australian Maritime Safety Authority (AMSA) is currently refurbishing the lighthouse, an endeavor that is expected to last for about 21 weeks.

“It’s definitely a challenging project… One of the key challenges is just getting equipment and materials to site, with the majority of materials delivered here by helicopter… Many of our lighthouses are located on islands, some on reefs, and you’ve got buoys as well … all are located in a harsh marine environment,” Daniel Atkins, an AMSA senior adviser and engineer, said to ABC News.

As part of the maintenance, workers will have to remove glass from the top of the lighthouse. Since steep rocks border the island, the place remains inaccessible by boat. The entire island is covered solely by low-lying scrub vegetation. At present, the light has been switched off due to the ongoing refurbishment work. However, a temporary light has been installed at the top of the scaffold.

Breaksea Island lighthouse has a special cultural value for the people in Australia. When the country’s 30,000 troops sailed from Albany to fight in the First World War, the lighthouse was one of the last symbols of home they saw. Plus, many soldiers relayed messages using Morse code through the lighthouse keeper’s daughter.

Even today, lighthouses play an important role in navigation for many sailors. When modern equipment fails for whatever reason, the sailors take out their maps and look for the locations of lighthouses. And when they see a light beaming from afar, it is often a moment of relief as they have finally found land.

In the U.S., lighthouses are dealt with through the National Historic Lighthouse Preservation Act of 2000. The legislation mandates a process for the transfer of federally owned lighthouses to private owners.

Once the General Services Administration (GSA) approves the sale of a structure, the government invites applications from historical or non-profit organizations. The winning applicant is responsible for maintaining the light and making the structure accessible to the public.

Phare du Créac’h lighthouse in France is often considered one of the most powerful in the world. Operational since 1863, the lighthouse sends two flashes every 10 seconds that can be seen even 30 miles away. Though no one is allowed inside the lighthouse, people flock to look at the structure and the powerful light it emits.

The Les Eclaireurs Lighthouse is located on a small Argentinian island. “This city is described as the southernmost city in the world and thus this lighthouse is also known as ‘The lighthouse at the end of the world.’ It was built in 1920 and is shaped conically. It stands 33 feet high and is made entirely of bricks with red and white painted walls. A very popular tourist destination, Les Eclaireurs Lighthouse can be reached via a small boat ride from nearest city Ushuaia,” according to Listovative.

Kõpu Lighthouse in Estonia is one of the oldest in the world. At 118 feet in height, the lighthouse has been active since 1531. Even though a new radar lighthouse was constructed nearby, Kõpu Lighthouse still continues to be used for navigation by the locals.