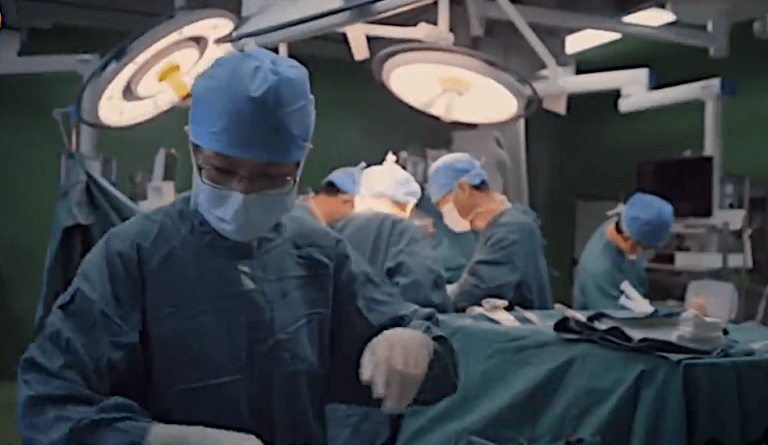 A surgeon in China performed the world’s first double lung transplant, but there is considerable unease about whether or not the lungs came from a consenting donor. (Image: Screenshot / YouTube)

With the coronavirus spreading all over China, senior officials from the Chinese Communist Party apparently also get infected, just like ordinary Chinese. On February 29, a patient infected with the virus received a double lung transplant in Wuxi, Jiangsu Province.

It is the world’s first recorded double lung transplant, but there is considerable unease about whether or not the lungs came from a consenting donor. The identity of the senior official who was the beneficiary of this privilege also remains a mystery.

Chen Jingyu, known as “the chief surgeon of China’s lung transplant operations,” said in an early morning post on March 1 that his team had completed the world’s first double-lung transplant in Jiangsu Province. Under the banner of “treating and saving people,” Chen Jingyu released the results speedily.

However, the operation continues to raise concerns among the outside world regarding the transplant industry in China, not the least of which is the suspicious source of the organs. And how did they achieve a nearly instantaneous match between patient and donor?

Chen Jingyu said on Chinese social media that on February 28, as the patient’s right lung was bleeding continuously and on the verge of failing, he was lucky enough to receive a lung the next day from a “brain-dead patient.”  The organs arrived in Wuxi after 7 hours via high-speed rail. At present, the patient is awake after the operation, and his new lungs are functioning well.

This statement is alarming. Being able to obtain matching organs in such a short time frame, in this case just the next day, is a serious indication that there exists a very large and dark underworld bank of human organs stolen from living victims, obviously without consent. The world needs to know: Exactly where did these lungs come from and who is the transplant recipient?

This case appears to be just a blatant attempt by the regime to whitewash their depraved world of live organ harvesting under the cover of the coronavirus epidemic with the fake banner of “treating and saving people.”

This is a common practice in communist China: An individual that enjoys “next day” special transplant treatment will certainly not be an ordinary person, but will be one who is powerful and privileged.

The Chinese Communist Party’s medical establishment enables something like this to happen. If it continues as the standard in the medical industry, it will become a human catastrophe. How many innocent and helpless people continue to be murdered for their organs in order to extend the lives of a small group of elites in China?