Art of a Luthier: Creation of a Cello 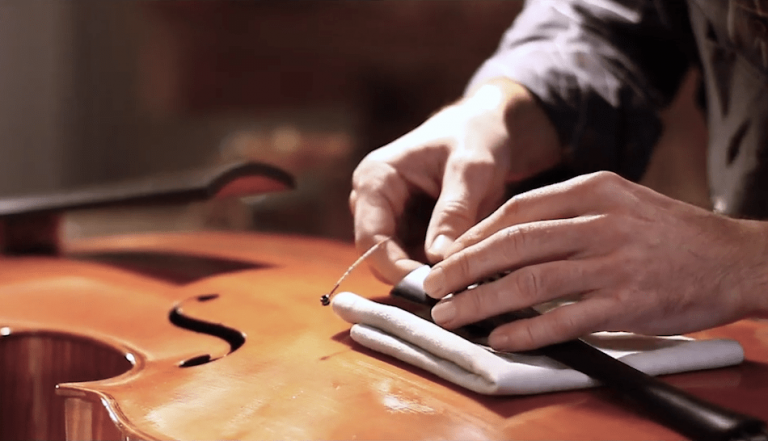 The craftsmen who make and repair string instruments are called luthiers. Only those with artistic sensitivity and high technical expertise can do this job. A documentary by Xavier Vidal explores the art of a luthier and the creation of a cello.

Art of a luthier creating a cello

Lito Iglesias is disheartened by the fact that most cellists know very little about how the instrument is made. He feels that such knowledge should be imparted to musicians since it would save them many explanations about how to play the instrument.

Iglesias argues that if a musician were to know perfectly well every function of an instrument, from why it has been shaped in a certain way to why a specific wood has been used in its creation, they would be able to achieve the best possible sound. “When we play music, the outcome is completely related to the qualities of an instrument. The talent of a musician can further develop using an excellent instrument rather than a medium quality instrument,” he says in the documentary.

As a luthier himself, Xavier Vidal feels that people in his line of work usually have less control over the sound of the cello. The entire construction process is dependent on a series of techniques that luthiers apply efficiently and rigorously. How the sound of the instrument turns out will remain a mystery until the instrument is ready.

Eduard Bosque, a luthier by profession, thinks that the most creative part of building a cello is the design phase. Unfortunately, most luthiers simply copy the styles of ancient instruments due to which the creative aspect of cello construction remains muted. Bosque tries to express his creativity through the details used as the art of a luthier in the cello building process.

“When I build an instrument, I personally try to think about the musician and try to find a tool that will help them do their job as a professional as well as a music student. I may have my own quirks, my creative or artistic preferences, but I always try to look for something that will please the musician at a functional and aesthetic level,” Bosque says in the video.

A matter of recognition

A luthier usually never gets the recognition that cello players do despite the fact that it is they who create the instrument. Ramón Andrés is an essayist who believes that a luthier is a craftsman in his greater degree of expression.

He points out that the concept of an artist is a fairly recent phenomenon that comes from the 18th century. During that time, performers tried to distance themselves from the craftsmen as they thought that the people who build instruments belonged to a lower level and were not as talented as those who play them. Andrés emphasizes that he does not consider craftsmen to be something less than artists. Without the art of a luthier, great instruments would not exist.

“The luthier is characterized by developing a hidden job. They never appear on stage when there’s a concert; the result of their job and the musician do appear though, but the job of a luthier remains unknown to the public. This is why luthiers might not feel recognized enough professionally,” Iglesias states in the video.

Andrés believes that the cello represents the romantic way of expressing modern consciousness. The sound of a cello expresses human intimacy and warmth better than other instruments. It is both lyrical and tragic at the same time, both epic and melancholic. As such, it is only natural that we give recognition to the art of a luthier that is deserved for their crafting such an excellent instrument.