An African Painter Who Criticizes Beijing Through Artwork 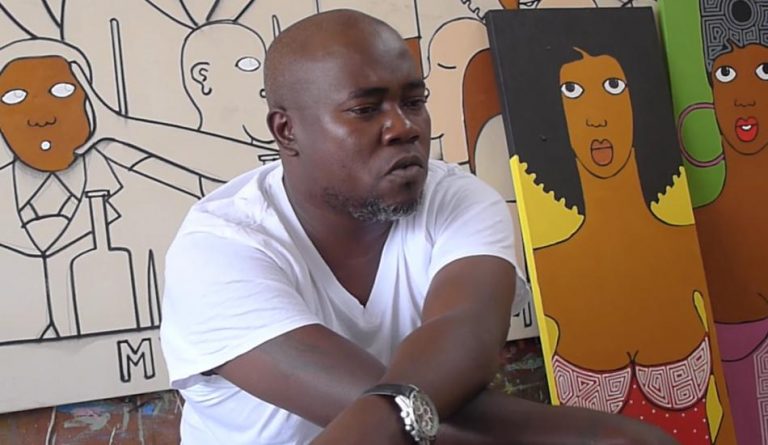 Michael Soi does not like how the relationship between Africa and China is right now. (Image: YouTube/Screenshot)

Michael Soi is a painter from Kenya who is not happy with China’s involvement in Africa. He feels that the relationship is akin to neo-colonization. As an artist, Soi brings attention to this problem in the best way he can — through paintings. He has created about 100 such paintings on the theme as part of his “China Loves Africa” collection.

The painter and his paintings

In 2015, the majority of artists selected to represent Kenya at the 2015 Venice Biennale were Chinese. These Chinese artists had no relationship with Kenya and neither did they reference Kenya in their art.

This infuriated a lot of Kenyan artists, including Soi, who saw Chinese influence eating into their identities. It had just been less than a year since Soi started his “China Loves Africa” series. This event acted as a trigger for him to continue working on the project all these years.

Soi does not feel the need to self-censor himself when criticizing China. In fact, several of his illustrations depict Chinese President Xi Jinping in a negative way. Xi is portrayed as “dispensing largesse to countries including Rwanda and South Africa. Another piece zooms in on China’s relationship with the African Union… depicting a Chinese leader as its head by 2030… Using nude female portrayals, he shows Africa as a woman being lured by China away from other Western nations. In another piece, a black male doctor administers treatment intravenously to a bedridden Chinese man drawing energy from gold, oil, copper, and titanium drip hooked to a black woman,” according to QZ.

Chinese officials have visited Soi. They lectured him about China’s “contributions” to Africa and how Soi was acting “ungrateful.” They handled many of the artworks in his studio very roughly and even marred some of them. He later came to know that several people in the Chinese embassy, as well as the Kenyan government, do not like the ideas presented through his works.

Soi has a realistic view of Chinese investments in Africa. He admits that it would be naïve to view all Chinese investments negatively. What troubles him is the high level of corruption and mismanagement that comes with it. “No one is philanthropic for no apparent reason. All this generosity is suspect… The bad leadership that exists in Africa is something they knew they could come and capitalize on… But let’s not forget, African leaders invited China. These corrupt politicians who are interested in massive acquisitions are the ones who brought them here,” he said to The New York Times.

As the influence of China has increased in Africa, the continent’s trade with the U.S. has seen a steady decline. This has made China the biggest trading partner in Africa. In 2017, U.S.-African trade was about US$39 billion. However, China-Africa trade was US$148 billion in that year, which is more than three times the U.S.-African trade.

“In the first half of 2019, China’s total import and export volume with Africa was US$101.86 billion, up 2.9 percent year-on-year… The total value of Chinese investments and construction in Africa is closing in on US$2 trillion since 2005,” according to CNBC. One of the biggest reasons for the decline in U.S.-Africa trade is the lowering of American energy demand. In 2008, the United States imported US$99.5 billion of oil and gas from Africa. Ten years later in 2018, this fell to just US$17.6 billion.

The Trump administration has noticed this shift in Africa’s relationship with the U.S. and China, proposing several projects to reverse the trend and ensure that America continues to have a strong influence on the continent. Rising Chinese influence might encourage authoritarian governments in Africa, which runs contrary to U.S. ideals that seek to strengthen democratic values in the region.