Air Pollution Drops in China Thanks to Coronavirus 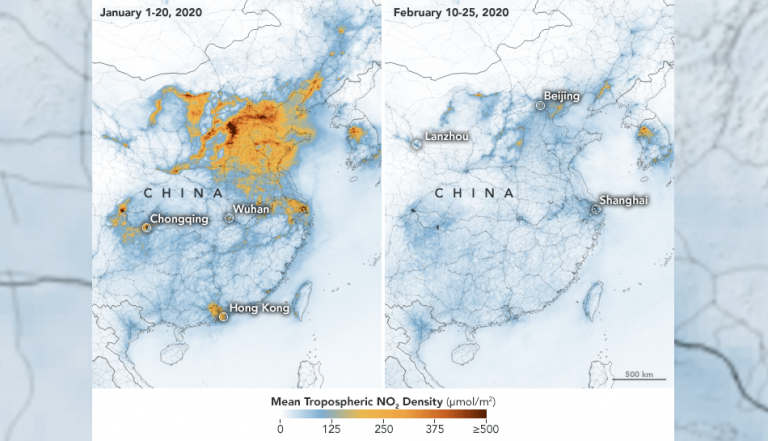 Satellite images taken over China show a huge drop in the level of nitrogen dioxide (NO2), compared to early January. (Image: via NASA Earth Observatory)

The Wuhan coronavirus outbreak has brought China to a standstill. Factories are empty, roads are desolate, shops are closed, and people keep themselves to their homes. While this does look dire, there is one unexpected, positive side effect — the air in China is far cleaner than it used to be.

The level of air pollution in China has fallen by about 25 percent over the last month. The level of nitrogen dioxide, the pollutant that is emitted while burning fossil fuel, fell by about 30 percent according to NASA. “This is the first time I have seen such a dramatic drop-off over such a wide area for a specific event,” Fei Liu, an air quality researcher at NASA’s Goddard Space Flight Center, said in a statement.

The last time the air was this clean was during the 2008 Summer Olympics. The government ordered factories to shut down and limited car travel. Air pollution halved. A study done on young people in Beijing discovered that their cardiovascular and lung health showed significant improvements during this period.

Pregnant women who came to full term at this time ended up giving birth to babies with weights far higher than that of ones born in the previous as well as the subsequent year. The current reduction in air pollution will also have similar effects on people, as breathing in cleaner air will improve their health. However, when compared to the health costs of theWuhan coronavirus, the reduction in air pollution does not seem much of a big benefit.

“It would be a mischaracterization to say that the coronavirus was beneficial to health because of these air pollution reductions… The health impacts from the virus itself, the stress on the health-care system, the stress on people’s lives — those health impacts are likely to be much greater than the short-term benefits of air pollution on health,” Jill Baumgartner, associate professor and epidemiologist at McGill University, said to NPR.

The decline in air pollution will obviously not last long. As China recovers from the outbreak, factories will restart operations more vigorously, trying to make up for lost production. This could end up causing pollution at never before seen levels.

The viral infection has hit China’s aviation industry pretty hard. Between January 20 and February 17, China’s air traffic fell to a dismal 25th spot in terms of global market share. Though it has rebounded to the second spot, the revenues are so low that not many airlines want to operate right now.

The decline in air traffic has forced the Civil Aviation Administration of China (CAAC) to offer financial incentives to the airline industry. Both domestic and foreign airlines are being offered subsidies to resume suspended services.

The scheme will apply to all services up to 30-Jun-2020,” according to Center For Aviation. Globally, the International Air Transport Association (IATA) predicts passenger business to suffer revenue losses of around US$63 billion to US$113 billion this year.