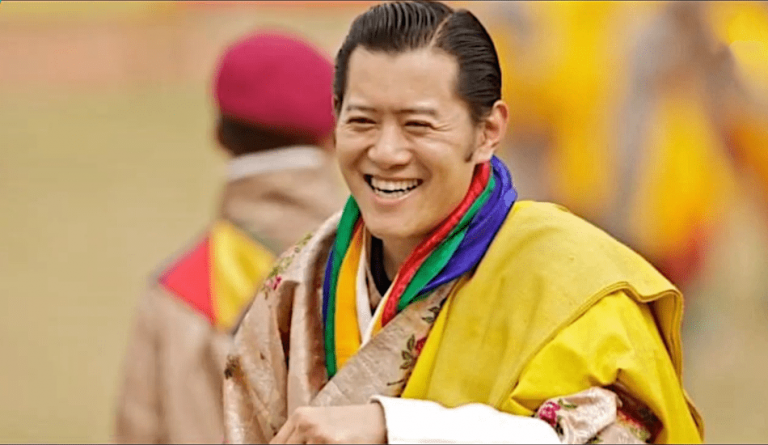 The King of Bhutan turned 40 years old on February 21 and his subjects have been asked to adopt a dog to honor him. (Image: Screenshot via YouTube)

Lotay Tshering, the Prime Minister of Bhutan, has asked the public to adopt a dog as a way to honor the birthday of King Jigme Khesar Namgyel Wangchuck. The King turned 40 years old on February 21.

“At an individual level, Prime Minister said one can choose to plant a tree and care for it, adopt a stray dog or commit to manage waste in your neighborhood. Personal commitment such as this, he said, would be the best gift for His Majesty,” PMO Bhutan states in a Facebook post. The Prime Minister was speaking at a celebration event held at the Changlimithang stadium. The post has received thousands of likes.

Stray dogs have been a huge problem in Bhutan for a long time. Back in 2009, the country conducted a nationwide campaign to neuter the creatures. Dogs were released back into the same location they were taken from. As of 2016, over 71,000 dogs in Bhutan were spayed, neutered, or given rabies vaccine.

Last year, the country launched its National Dog Population Management Strategy aimed at cutting down the population of free-roaming dogs. The Prime Minister’s call for adopting stray dogs is in line with this policy, as well as the country’s overall focus on environmental care.

Bhutan has consistently been ranked as one of the happiest nations in the world. This is largely due to the country’s policy that believes material wealth alone is not a good measure of a country’s prosperity. It has ditched the traditional GDP valuation and adopted a GNH (Gross National Happiness) valuation to determine the level of prosperity and peace.

Thakur Singh Powdyel, the former education minister of Bhutan, points out that it is difficult to be a prosperous nation in the long run without focusing on the wellbeing of the people and the conservation of the natural environment.

Powdyel argues that people often misunderstand Bhutan’s quest for national happiness. “People always ask how can you possibly have a nation of happy people? But this is missing the point… GNH is an aspiration, a set of guiding principles through which we are navigating our path towards a sustainable and equitable society. We believe the world needs to do the same before it is too late,” he said to The Guardian.

A study by the University of Texas Southwestern Medical Center found that teenagers suffering from diabetes managed their condition far better when they were tasked with taking care of a fish as compared to their peers who had no pets.

Even babies benefit from interacting with pets. “Babies raised in families that have pets may be less likely to get allergies and asthma… It has to start early, ideally before a baby is 6 months old… Babies with dogs or cats at home have fewer colds and ear infections during their first year than babies living in pet-free homes,” according to Web MD.

Pets can lower the blood pressure of an individual. Petting an animal triggers the release of a relaxation hormone and reduces stress levels. Children have been found to be better at interacting with their autistic classmates when pets are present in the classroom.