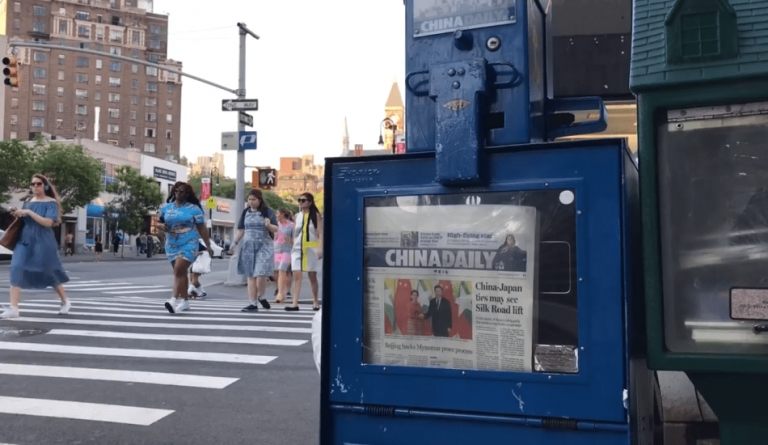 Days after the People’s Republic of China expelled three journalists for a “racist” op-ed headline run by The Wall Street Journal, The Trump administration has announced that it would limit the number of Chinese staff working in the United States for Chinese state-owned media outlets.

The restrictions were effective from March 13 and applied to four PRC media entities operating in the U.S. — China Daily Distribution Corp., China Global Television Network, Xinhua News Agency, and China Radio International. At present, these outlets have around 160 Chinese staff members. The new rule mandates that this number be reduced to just 100.

“For years, the government of the People’s Republic of China has imposed increasingly harsh surveillance, harassment, and intimidation against American and other foreign journalists operating in China… Our goal is reciprocity. As we have done in other areas of the U.S.-China relationship, we seek to establish a long-overdue level playing field. It is our hope that this action will spur Beijing to adopt a more fair and reciprocal approach to the U.S. and other foreign press in China,” Secretary of State Mike Pompeo said in a statement.

Pompeo pointed out that the U.S. government was only reacting to Beijing’s restrictions on foreign journalists. The new rules do not place any restrictions on what type of content the affected media outlets can publish in the country.

Since the mid-2000s, the PRC has spent billions of dollars on what the Chinese Communist Party calls its “Great External Propaganda Plan” (大外宣), a coordinated effort to influence overseas audiences to pro-CCP viewpoints.

The media companies are among the five entities the U.S. classified as “foreign missions” last month, essentially treating them as part of the Chinese government. Since the new restriction will only be applicable to companies, the U.S. government will not personally expel any Chinese journalist working with these outlets. That decision is to be taken by the entities themselves.

Pompeo urged the Chinese government to uphold its commitments to the international community when it comes to free speech and freedom of the press. The Trump administration is also expected to announce restrictions on the duration of stay on I-visas that are issued to Chinese nationals. Last month, Beijing expelled three journalists associated with The Wall Street Journal after they published an article the state termed “anti-Chinese.”

Zhao Lijian, a PRC foreign ministry spokesman, voiced Beijing’s anger with the Trump administration for placing employee limits on Chinese propaganda operations. He claimed that the new restrictions would disrupt the working of Chinese media companies as well as unfairly tarnish their reputations in the U.S.

“Based on the Cold War mentality and ideological prejudice, the U.S. State Department suppressed Chinese media agencies with political means in the United States for unexplained reasons,” Zhao said, as reported by Fox News.

“It might be U.S. Army who brought the epidemic to Wuhan,” he said, referring to the central Chinese city where the epidemic began.

However, even with the new restrictions, there will be more Chinese media personnel working in the U.S. than American journalists working in China.

Last year, the United States gave I-visas to 425 Chinese media personnel. In contrast, the number of U.S. journalists working in China is just about 100. In their recently released annual report, the Foreign Correspondents’ Club of China warned that Beijing is preparing to expel more foreign journalists with the clear aim of intimidating foreign media.

The report reveals that almost 82 percent of the surveyed journalists admitted to having faced harassment, interference, and violence when they were reporting in China.