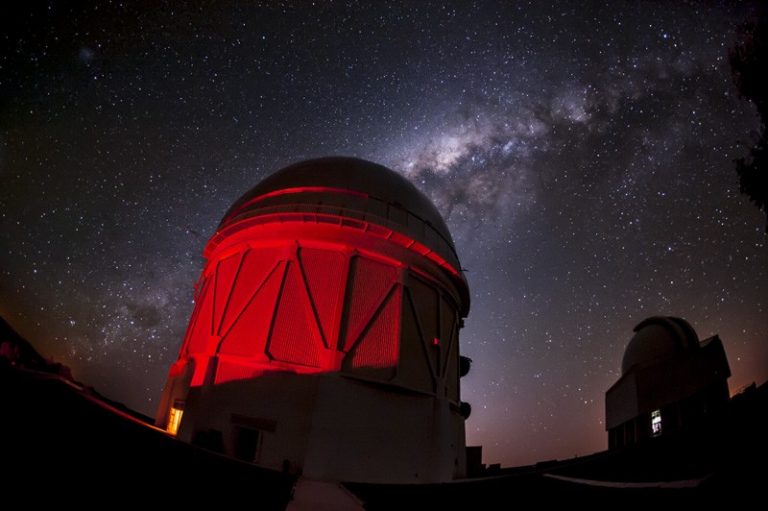 Using data from the Dark Energy Survey (DES), researchers have found more than 300 trans-Neptunian objects (TNOs), minor planets located in the far reaches of the solar system, including more than 100 new discoveries. Published in The Astrophysical Journal Supplement Series, the study also describes a new approach for finding similar types of objects and could aid future searches for the hypothetical Planet Nine and other undiscovered planets. The work was led by graduate student Pedro Bernardinelli and professors Gary Bernstein and Masao Sako.

The goal of DES, which completed six years of data collection in January, is to understand the nature of dark energy by collecting high-precision images of the southern sky. While DES wasn’t specifically designed with TNOs in mind, its breadth and depth of coverage made it particularly adept at finding new objects beyond Neptune. Bernstein said:

“The number of TNOs you can find depends on how much of the sky you look at and what’s the faintest thing you can find.”

Because DES was designed to study galaxies and supernovas, the researchers had to develop a new way to track movement. Dedicated TNO surveys take measurements as frequently as every hour or two, which allows researchers to more easily track their movements. Bernardinelli said:

“Dedicated TNO surveys have a way of seeing the object move, and it’s easy to track them down. One of the key things we did in this paper was figure out a way to recover those movements.”

Using the first four years of DES data, Bernardinelli started with a dataset of 7 billion “dots,” all of the possible objects detected by the software that were above the image’s background levels. He then removed any objects that were present on multiple nights — things like stars, galaxies, and supernova — to build a “transient” list of 22 million objects before commencing a massive game of “connect the dots,” looking for nearby pairs or triplets of detected objects to help determine where the object would appear on subsequent nights. Bernardinelli said:

With the 7 billion dots whittled down to a list of around 400 candidates that were seen over at least six nights of observation, the researchers then had to verify their results. “We have this list of candidates, and then we have to make sure that our candidates are actually real things.”

To filter their list of candidates down to actual TNOs, the researchers went back to the original dataset to see if they could find more images of the object in question. Bernstein explained:

“Say we found something on six different nights. For TNOs that are there, we actually pointed at them for 25 different nights. That means there’s images where that object should be, but it didn’t make it through the first step of being called a dot.”

Bernardinelli developed a way to stack multiple images to create a sharper view, which helped confirm whether a detected object was a real TNO. They also verified that their method was able to spot known TNOs in the areas of the sky being studied and that they were able to spot fake objects that were injected into the analysis. Bernardinelli said:

“The most difficult part was trying to make sure that we were finding what we were supposed to find.”

After many months of method-development and analysis, the researchers found 316 TNOs, including 245 discoveries made by DES and 139 new objects that were not previously published. With only 3,000 objects currently known, this DES catalog represents 10 percent of all known TNOs.

Pluto, the best-known TNO, is 40 times farther away from the Sun than Earth is, and the TNOs found using the DES data range from 30 to 90 times Earth’s distance from the Sun. Some of these objects are on extremely long-distance orbits that will carry them far beyond Pluto.

Now that DES is complete, the researchers are rerunning their analysis on the entire DES dataset, this time with a lower threshold for object detection at the first filtering stage. This means that there’s an even greater potential for finding new TNOs, possibly as many as 500, based on the researchers’ estimates, in the near future.

The method developed by Bernardinelli can also be used to search for TNOs in upcoming astronomy surveys, including the new Vera C. Rubin Observatory. This observatory will survey the entire southern sky and will be able to detect even fainter and more distant objects than DES. Bernardinelli said:

“Many of the programs we’ve developed can be easily applied to any other large datasets, such as what the Rubin Observatory will produce.”

This catalog of TNOs will also be a useful scientific tool for research about the solar system. Because DES collects a wide spectrum of data on each detected object, researchers can attempt to figure out where the TNO originated from, since objects that form more closely to the Sun have are expected to have different colors than those that originated in more distant and colder locations.

And, by studying the orbits of these objects, researchers might be one step closer to finding Planet Nine, a hypothesized Neptune-sized planet that’s thought to exist beyond Pluto. Bernstein said:

“There are lots of ideas about giant planets that used to be in the solar system and aren’t there anymore, or planets that are far away and massive but too faint for us to have noticed yet.

“Making the catalog is the fun discovery part. Then when you create this resource, you can compare what you did find to what somebody’s theory said you should find.”

Provided by: University of Pennsylvania  [Note: Materials may be edited for content and length.]