The Mythology and History Behind Chinese Music 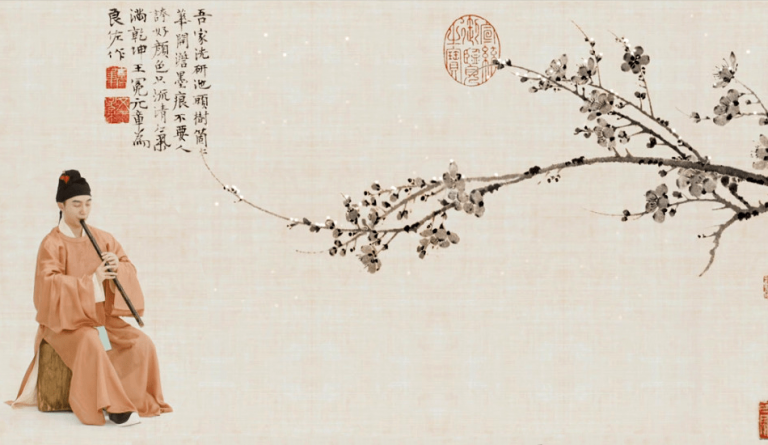 China has one of the oldest music cultures in the world, with a history spanning thousands of years. (Image: Screenshot / YouTube)

China has one of the oldest music cultures in the world, with a history spanning thousands of years. When it comes to how Chinese music originated, the Chinese have an interesting mythological tale to explain this — one that involves a magical creature.

During a time when immortals walked on the earth, a young woman once ended up treading on the footprint of a giant. She soon got pregnant and gave birth to a male child. Called Fuxi, he had the head of a human and the body of a dragon.

As he grew up, Fuxi became as tall as a giant. After he came of age, Fuxi decided that it was time to know who his father was. He set out on a journey.

Fuxi soon discovered that his father was the God of Thunder. Later, he was appointed as the Celestial Ruler of the East and tasked with watching over humanity. Fuxi was very compassionate and always sought to end the suffering of people.

One day while walking in the mortal world, a parasol tree caught his eye. It had something very special about it. Suddenly, a cloud that carried two phoenixes approached the tree. Numerous other birds soared behind the cloud.

They all opened their beaks and sang, paying homage to their king and queen. Fuxi realized that the tree was blessed and any instrument created from it should produce wondrous music.

“Fuxi created a zither-like instrument rich in symbolism. On one end, it tapered to four inches across, representing the four seasons. Its two-inch thickness corresponded to the duo forces of yin and yang. Across its top, Fuxi fixed 12 frets for each month of the year and laced five strings for the Five Elements,” according to Shen Yun Performing Arts.

After people discovered music, they were joyous. Fuxi had already taught them fishing, hunting, and creating fire. Now, thanks to the instrument, they were able to enjoy music at their harvests and festivities. This is how, according to Chinese mythology, music came into existence.

Archaeologists have discovered bone flutes dating back 8,000 years in China. Clay music instruments over 6,000 years old have also been found. However, not much is known about the music culture or knowledge of these periods.

The first time China saw a systematization of musical knowledge is during the Zhou Dynasty (10th to 7th century BC). A formal system of ceremonial and court music was established. People in those times saw music as the manifestation of nature and the cosmos, in harmony with the concept of yin and yang.

A big impact was created by philosopher Confucius, who saw music as one of the highest arts. “He thought that of the six most important subjects to study, studying music was second in importance only to the study of ritual or public ceremonies.

He ranked music higher than the other four necessary subjects that were archery, chariot-riding, calligraphy or writing, and computation or mathematics,” according to China Highlights. Confucian philosophy saw formal music to be morally uplifting.

Between 500 B.C. and A.D. 1900, several musical ideas from foreign lands made their way into China. These combined with local knowledge to produce a rich musical culture. From India came the heptatonic scale.

From Central Asia came instruments like the pipa and erhu. During the Tang Dynasty (618 to 907), an instrument called the qin was very famous. European music came in the 1600s when a visiting Jesuit priest gifted a harpsichord to the Ming Imperial court.