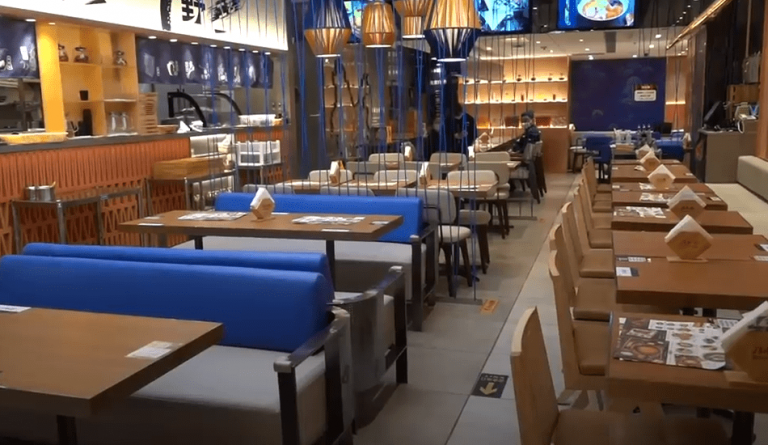 All sectors of the Chinese economy are suffering, but the restaurant industry has been the hardest hit. (Image: Screenshot / YouTube)

Though the CCP virus outbreak situation in China is said to be stabilizing, which experts agree is probably not the case, things have remained rather disappointing for China’s economy. Whether it be employment, production levels, or economic growth, everything is in the red, a situation the country hasn’t suffered through in a long time.

According to data released by the National Bureau of Statistics, retail sales during the Jan-Feb period declined by 20.5 percent when compared to the same period last year. Fixed asset investment is down by around 25 percent, while industrial output fell by 13.5 percent, which is the sharpest contraction ever recorded.

All these numbers are way below the expectations of economists. March numbers could be even worse. Unemployment has also crept up, rising from 5.2 percent in Dec 2019 to 6.3 percent in February.

Almost every business sector has felt the heat of the contraction of China’s economy. General merchandise sales fell by 17.6 percent during the first two months of the year. Even online sales, which many thought might be shielded from the impact of the coronavirus, showed disappointing data, indicating a decline of 3 percent.

The most hit sector was the restaurant industry as sales tumbled by more than 43 percent in the Jan-Feb period. This makes sense given the situation, since people are afraid to eat food from outside, making hotel and restaurant businesses very vulnerable.

According to Larry Hu, the chief China economist at Macquarie Group, China’s economy might contract by up to 6 percent during Q1 2020 compared to the same period a year back.

If this turns out to be true, it would be the first time since 1976 that the country has experienced a shrinking economy. The Chinese government has promised to roll out a slew of relief measures to counter the negative economic effects of the viral outbreak.

These are aimed at increasing government spending, lowering borrowing costs, reducing tax burdens, and protecting the existing jobs of citizens. Since February, the People’s Bank of China has been pumping hundreds of billions of dollars into the economy to maintain money market liquidity.

But despite these measures, many feel China’s growth rate for 2020 will only turn up disappointing. “Even if you do see an extraordinary level of domestic resiliency — which I should point out is not yet evident in any of our data — the global spread of Covid-19 has shut down all of China’s major trading partners at just the wrong time… No matter what Beijing engineers domestically, the growth rate will be capped significantly by what’s transpiring across the rest of the world,” Leland Miller, chief executive officer of China Beige Book, said to CNBC.

At present, China is saying the spread of coronavirus is well under control. They are reporting fewer cases of new infections, with some days even registering zero new cases.

Officials are using these figures to say the severe quarantine measures implemented by the government are working. However, many experts do not acknowledge that these figures are credible and reports from Chinese people in places like Wuhan paint a very different picture.

At the same time, the number of imported CCP coronavirus cases has been rising. “Beijing and Shanghai were the main entry points for the returnees, many of whom are students who were studying abroad… They have come back after many education campuses in the United States and Europe shut down to stem rapidly rising infection rates there,” according to Channel News Asia.

According to the latest data, China acknowledges more than 81,000 cases of CCP coronavirus infections and 3,261 deaths. However, it is believed these numbers are highly under-reported.

Surprisingly, China has been overtaken by Italy when it comes to coronavirus deaths, as more than 9,000 people have died of the infection in the European country. The U.S. has more than 100,000 infections and over 1,500 deaths.