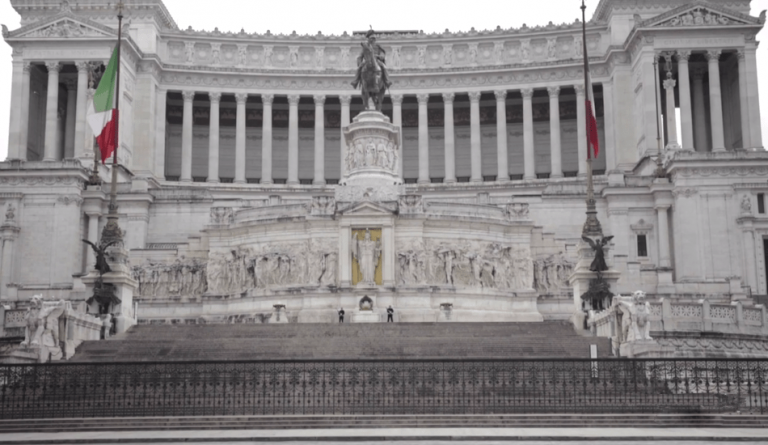 Italy has been severely impacted by the coronavirus, Didone, who settled in Yilan, issued a letter through the Camillian Saint Mary’s Hospital in Luodong appealing to the public for donations. (Image: Screenshot / YouTube)

Italy is currently under lockdown in a bid to contain the spread of the CCP coronavirus. With people essentially restricted to their homes at a time when the deadly virus is running loose, many of them feel helpless and are panicked.

To counter such grim feelings, Italians are now singing from balconies and courtyards as a way to boost the morale of the community.

Singing against the coronavirus

Matteo Colombi is a regular everyday Italian who works at Florence’s water company. While surfing social media, he came across a message that asked people to go near their windows and play music.

Colombi wasn’t particularly inspired to do it right away. But after a nearby family played music with the mother holding a child in her arms and waving at him, Colombi’s views changed.

“A little later I heard the sound of people using pans to beat out a rhythm. It turned out to be two elderly women, both small and physically frail, who were testifying in this way to their love of life and of the city. I took two pans myself and followed their beat. Then we said goodbye to each other and closed our windows as it was getting too cold to carry on,” he said to The Guardian.

Soon, numerous videos of Italians singing and playing instruments started going viral on social media. In Siena, a video of residents singing a traditional song from their windows garnered over 600,000 views on Twitter.

In a district in Rome, neighbors sang the folk song Volare. In one video from Turin, a resident describes the music coming from the balconies as a “free concert.” One DJ from the city of Palermo decided to take things to the next level by setting up his equipment and played music from his balcony with nearby people whistling at his performance.

A video of his performance was viewed over 4 million times on Twitter. Singer Andrea Sannino made a compilation of videos of people in his hometown singing his song Abbracciame from their windows. He posted it on his Instagram profile.

The singing spirit of the Italians has also inspired people from other countries as well. In the U.S., radio host Bonnie Curry from Texas sang Lean on Me from her balcony together with her friend.

“When I saw the video of them [Italians] singing from window to window to encourage each other, I realized I live in a building that has lots and lots of windows… I think we could all use a bit of encouragement right now,” she said to NPR.

Singing together as a community is a good way to keep everyone in high spirits during these times of panic. Singing has been “proven to calm nerves, release endorphins (the pleasure hormone), release oxytocin (the hormone that’s directly linked to anxiety and stress levels in your body), and it eases the symptoms of panic attacks.

If you add some movement like dancing or even nodding your head to the beat, you are upping the feel-good quotient,” according to Healthy Magazine.

When a group of people engage in singing, their heightened good mood and sense of well-being will rub off on each other. Even if they are strangers, the fact that they sang and smiled together is enough to create a camaraderie that can break through the somber feelings generated due to quarantine. People who shut themselves in without making any fun social contact with others might find it difficult to endure the isolation of the lockdown.