The History of Spring Rolls (Plus Bonus Recipe) 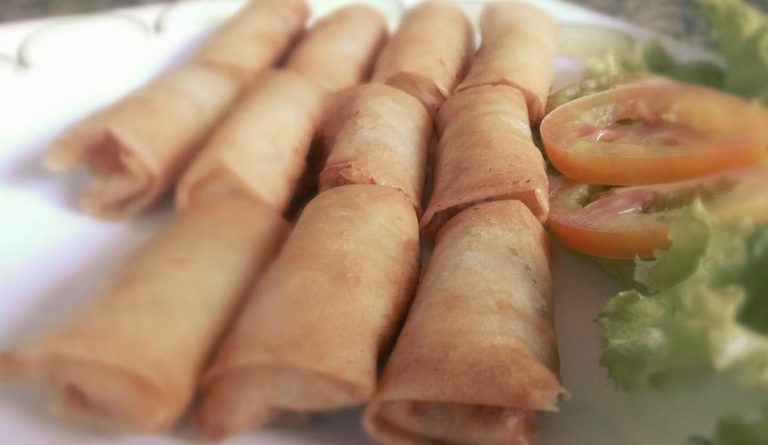 Every country has its unique appetizer that the local population takes pride in. Mexicans have their Quezo Fundido, Malaysians have Chicken Satay, Swedes have their Gravlax, and Chinese have their spring rolls.

Spring rolls are a seasonal dish that’s prepared during the spring festival. Like many dishes, this savory roll of delight has a long history. Now, before you try the simple spring roll recipe at the end of the article, let’s first unroll its wonderful history.

The history of spring rolls

It is said that the first version of spring rolls was made during the Jin Dynasty. Spring dish — that’s what they used to call it. People would make thin cakes with flour and eat them with vegetables and fruits at the start of the spring season. People enjoyed them as gifts or a blessing from relatives. Later on, the dish evolved into “spring cakes.”

Fast-forward two dynasties later and people improved on the spring cake during the Tang Dynasty. Both rich and poor had their takes on the recipe.

The less fortunate just added carrots and celery to the appetizer, while the richer folks incorporated more flavors by adding ingredients like spinach, beansprouts, beans, eggs, vermicelli, cooked meats, other fried dishes, and sauce. When the Song era came, the spring dish became a luxury meal for the imperial palace.

Culinary artists during the Ming and Qing dynasties further developed the dish and transformed it into what we know today as spring rolls. Now, this bite-sized appetizer is filled with numerous ingredients, such as shredded pork with chives, sweetened bean paste, and more.

Served crispy and golden brown, a bite of it will burst flavors at the first crunch. As promised, here is a simple spring roll recipe that you can try at home!

Nagi, a food blogger, said: “You’ve never really had a Spring Roll until you’ve tried homemade ones!” In her blog, she shared a wonderful spring roll recipe that’s easy to follow. First, let’s look at her ingredients.

For the spring rolls: 15-20 spring roll wrappers, two tsp cornflour, 1 tbsp water, and oil for frying. Take note, that the cornflour and water are used for sealing the rolls.

For the sweet and sour sauce: all you need are two tsp cornflour or cornstarch, two tbsp water, half a cup of apple cider vinegar, one-third cup of brown sugar, two tbsp tomato ketchup, and two tsp of soy sauce.

To cook the filling, heat the oil in a skillet. Add garlic and stir. Then, throw in the minced pork and break it up until it’s white. Add the veggies next and cook for three minutes or until the vegetables are wilted. After that, put cornflour, soy sauce, and oyster sauce into the mix and cook for a minute until the liquid’s gone.

Now, let’s prepare the spring roll. The first step is to mix the cornflour and water in a small bowl. Peel off one spring roll wrapper carefully as it is easy to rip. Place the wrapper in a diamond position on a plate.

Take a spoonful of filling and add it to the bottom of the wrapper. Then, you have to roll it up. Stop midway and fold the sides before finishing the roll. Seal the spring roll with the cornflour mixture.

Once you’ve made enough spring rolls, it is time to deep fry them. Just place the spring rolls in hot oil, turn them occasionally so all sides are cooked till golden brown, and you’re done. Of course, the taste is not complete without the sauce.

Prepare a small saucepan over medium heat, then mix all the ingredients in. Stir so that the sauce won’t stick and burn at the bottom of the pan. After three to five minutes, the sauce will thicken. And there you have it! Take a spring roll, dunk in the sauce, and take a bite. Yum!