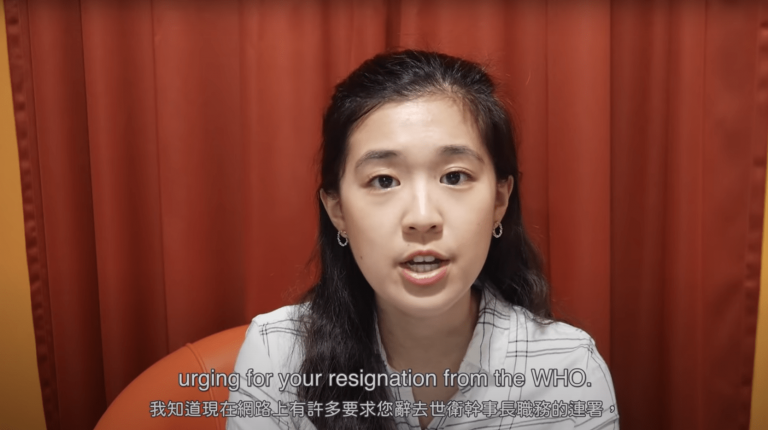 In light of recent accusations against Taiwan by the WHO's General-Director, a Taiwanese student has urged Dr. Tedros to apologize. (Image: Screenshot via YouTube)

COVID-19 is not only shaking the world and leaving thousands of people short of breath. As a recently published YouTube video to the WHO Director-General shows, the geopolitical implications of how influential organizations and leaders are dealing with the CCP coronavirus outbreak are also causing public outrage and a lot of social media responses.

An open letter to the WHO Director-General

Taiwanese student Vivi Lin, studying infectious diseases in the UK, recorded a video in which she reads her public letter to the WHO (World Health Organization) in response to the WHO Director-General’s recent criticism of Taiwan.

According to the WHO Director-General, Dr. Tedros Adhanom Ghebreyesus, Taiwan is allegedly linked to a racist campaign and threatening remarks made against him recently. In her video, Vivi Lin expresses her shock and how saddened she is about the accusations against Taiwan.

The Taiwanese student further explains why the WHO Director-General’s accusations against Taiwan are  “misleading.” She furthermore questions how such “allegations could come from a supposedly respected health professional and the head of the world’s most influential international health organization.”

Watch the video of An Open Letter to Dr. Tedros, there Who Director-General,  in response to his accusations against Taiwan, or read the transcript below.

Here is a copy of the open letter from the YT Channel Vivi Lin to Dr. Tedros, the WHO Director-General, in response to his accusations against Taiwan during the April 8 WHO press conference.

I am Vivi Lin from Taiwan, a current undergraduate student studying Infectious Diseases in the UK.

Upon hearing your response in the press conference today, I was utterly shocked and saddened that such misleading allegations could come from a supposedly respected health professional and the head of the world’s most influential international health organization.

As a student who has been working closely with Taiwanese and British Medical and Health-related NGOs, I can affirm that there has never been any disrespectful comments from our government and our diplomats towards you and the African continent due to race, culture or skin colour.

I am aware that there are various petitions online urging for your resignation from the WHO. However, none of the requests or criticisms were based on discriminations against your race or skin colour, nor people from the African continent.

Taiwan has been striving to contribute as much as possible to the international community and to be a part of the global team in combating this pandemic. Although we have been excluded from the WHO, we have never given up. Our government has done an exemplary job in containing the virus, a feat that has been praised by officials and health professionals from all around the world. And now, as we have some spare capacity, we are sending aid to our allies and other countries, including those in America, Europe and in Africa who have been harshly impacted by the outbreak.

According to our health professionals who used to work closely with various countries in Africa, a temporary hospital has been built by Taiwan in Eswatini at the moment, and some important medical supplies sent by Taiwan are finding their way to Africa as well.

With all the aforementioned in mind, how can you, in a few sentences, attempt to smear Taiwan’s reputation with such irresponsible and false accusations?

In the past two days, WHO hosted webinars in regards to how we, as individuals or as health professionals and officials, should confront the current info-demic. Ironically, just right after the webinar, Dr Tedros, as the DG of the WHO, was accusing Taiwan with misinformation.

I firmly believe that health is a fundamental human right that should not be denied despite differences of any kind. Health for all, leave no one behind, is also the core value that the WHO stands for. Please do not forget your dedication as a public health professional and the vows that you made when you ascended to the honorable position you are sitting at right now — health of people in the world comes first, not politics.

We are now facing the most challenging health crisis of our time. Taiwan cares about people’s health. We are willing to help, and we are helping now. Taiwan is a country that stands for progressive values, and we, as the Taiwanese people, are also known for our appreciation for diversity. We have never criticized you nor your actions based on your race, culture, or skin color.

I, on behalf of my beloved country and people, am now asking for an apology from you under the current circumstance.

Thank you for your time.

To understand the relationship between Taiwan, the WHO, and China, you need to be aware of the following facts.

Dr. Tedros and the WHO’s ties to Beijing

The WHO and Taiwan have quite a history. Especially when it comes to the role Mainland China plays. For decades now, China has been using its influence — as one of the five permanent veto-wielding members of the UN Security Council — to prevent Taiwan from participating in WHO programs or playing any role in it at all.

Many experts are critical of Dr. Tedros’ and the WHO’s objectiveness when it comes to China and Taiwan — especially since he became elected with the strong support of China, which claims that Taiwan is its territory.

Dr. Tedros strongly backs Beijing’s claims despite the many facts and evidence showing Beijing’s attempts to suppress early reports about the outbreak of COVID-19. In light of Beijing’s lack of transparency, Tedros also echoes the CCP’s criticism of the U.S., without one mention of scrutiny toward Beijing.

While thousands die from the #Coronavirus, the @WHO is busy cleaning up the #CCP's trail of blood. The #WHO, like all #UN orgs, is a bloated bureaucracy that should be mothballed & put in a Museum. #Trump is right, the #US should stop funding the WHO.https://t.co/AyTomxSRH4

While Taiwan has been barred from the UN and has been stripped of its observer status at the WHO’s World Health Assembly, it has one of the most stable public health systems in the world.

The country has received much praise recently for how it has been handling the CCP virus outbreak and its COVID19 cases.

Even though Taiwan is in such close geographical proximity to China — there is frequent travel to and fro, from both sides — Taiwan has only reported 379 cases of CCP coronavirus infections and five deaths from COVID-19.

Africans in China are now being evicted from their homes

The BBC has recently reported that Africans in China are being evicted from their homes over CCP coronavirus rumors. Several African ambassadors in China have written to the county’s foreign minister to express their complaints about “stigmatization and discrimination,” the article explains.

What happened was that early last week, unverified rumors began circling cities like Guangzhou that African communities had become “a new hotbed for the coronavirus.” As a result, Chinese officials soon after began door-to-door testing in which they allegedly only targeted African immigrants.

According to a report by Foreign Policy,  China will do anything to deflect the CCP virus blame linked to the advent of COVID-19.

Putting it all into context

It takes quite some effort to cut through the smokescreen currently being created around the question of COVID-19. But it seems the louder the accusations get, the more apparent the accurate picture becomes.

As the dots are connected, they seem to lead down a rabbit hole. A rabbit hole that is leading to a truth that many dare not touch because it may be very inconvenient to a specific group of individuals.

A truth many dare not touch or speak about due to the fear of being ridiculed, falling victim to media censorship, the fear of economic sanctions against critics opposing this machine of propaganda, or even fear of persecution.

It is ironic how the actual authorities responsible for the extent of the CCP virus outbreak are slowly exposing themselves by trying to evade the light of public scrutiny.

The Chinese government aggressively covered up the #CoronavirusOutbreak and tried to silence medical experts who sounded the alarm. Had the Chinese government acted responsibly, we could have stopped this pandemic and averted the enormous cost in lives and jobs worldwide. https://t.co/MtoHY5byEK pic.twitter.com/57vKperWM3

If you’re interested in reading more of our popular articles centered on China and the CCP coronavirus, make sure to check out the following articles: