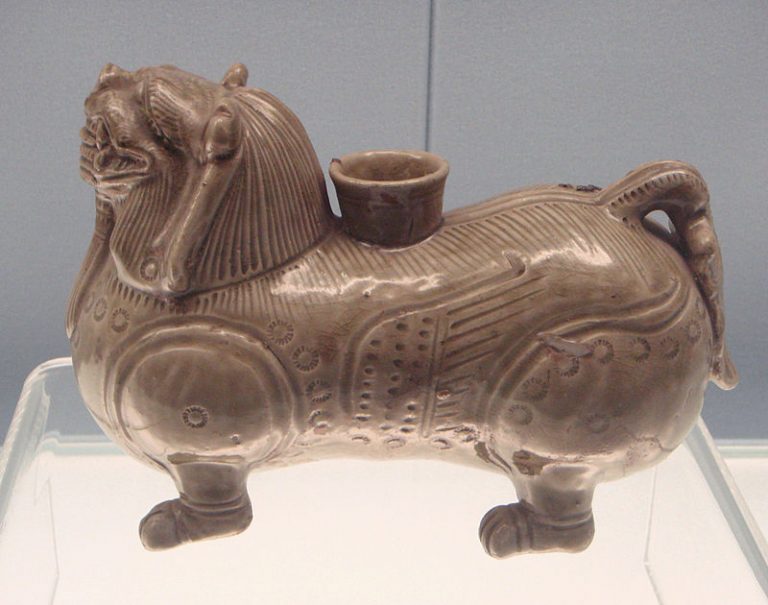 During the reign of Emperor Ming of the Jin Dynasty (265-420), warlord Wang Dun campaigned to fight against the imperial government. His troops advanced eastward along the Yangtze River to Jiankang (modern Nanjing) planning to overthrow the emperor so that Wan Dun could be emperor himself. When Emperor Ming learned of the news, he decided to lead his army out to fight the local warlord. The two camps stationed themselves by Poyang Lake.

Emperor Ming, considering himself brave and capable, changed into casual clothes and rode to check on the enemy site alone. Seeing a man with imposing looks wandering outside their camp, Wang Dun’s guards became suspicious and reported the news immediately. Deducing from their description of the stranger, Wang Dun figured it most probably was the emperor.

He told them to prepare his horse for the chase. Meanwhile, a group of five soldiers was riding to patrol the site. Wang Dun saw them and ordered them to get the man outside the camp first while he would follow behind in a minute.

Emperor Ming saw the camp doors open and five soldiers ran toward him. Instinctively, he knew they must be after him. He urged his horse to go back. Wang Dun’s squad immediately followed. Although there was some distance between them, Emperor Ming could not take any chances. He was thinking about ways to detain the chasing soldiers. Soon he came to a willow woodland. There was a tea house at the fork of two side roads by the woodland and an old woman was selling water in front of the tea house.

“That is it!” thought the emperor as he dropped his horsewhip in front of the woman and directed his horse to the back of the woodland. The old woman saw something shiny drop to the ground. She picked it up and realized it was a whip. But it was not an ordinary one — it was set in gold and silver and embedded with jade and precious stones!

While she was admiring the whip, the chasing squad arrived. Losing track of their target, they got down from their horses. As soon as they saw what she was holding, they grabbed it from her. It was something that they never had the chance to set their eyes on before. They fought to have a closer look among themselves and totally forgot about catching the fleeing man until Wang Dun’s team caught up with them.

By this time, Emperor Ming was nearly at his camp and safe from Wang’s desperate chase to get him. The mad warlord could only seize the dropped whip and whip the five soldiers with it for punishment.

Emperor Ming retained a clear mind amid the chase and used the rare whip as a diversion. He gained precious time from using it as a decoy and finally managed to escape back to safety.