How Did the Ancients Cope With Plagues? 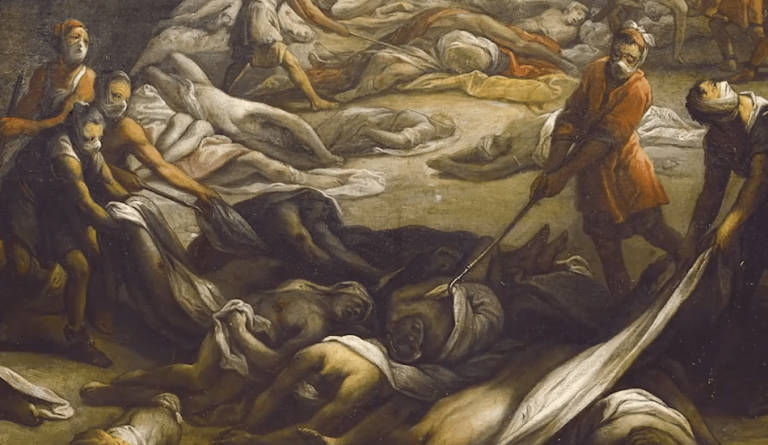 The ancients believed that to escape plagues, it was necessary for people to sincerely confess their sins to God and repent. (Image: Screenshot via YouTube)

The ancients believed that to escape a plague, it was necessary for people to sincerely confess their sins to God and repent. In modern times, people speak of “raising their vibration.” And the steps required to reach such a level include developing kindness, honesty, integrity, tolerance, selflessness, optimism, and respect for the divine.

The ancients also believed that plagues were able to recognize and target the people it would strike down. According to them, it was punishment sent from Heaven, set loose on the population for the purpose of eliminating morally corrupt people. The only hope, once a plague had been unleashed, was for people to express their regret for the things they had done wrong in the past and pray to God for a chance to make up for what they had done.

The misery of the Great Plague in Rome made people awaken. People held up Christ’s sacred bones, marching around the city, sincerely confessing their sins to God. Amazingly, the plague vanished right away.

At the end of the Ming Dynasty, government officials were corrupt. The bubonic plague was prevalent in the capital city, Beijing. During the 17 years of the reign of Emperor Chongzhen, there were no less than 7 outbreaks of plagues that occurred over a period of 15 years, causing more than half of the country ’s population to die. Nearly 60 percent of Beijing residents died from the plague, and only 50,000 out of 230,000 households survived in the city of Suzhou.

However, the peasant army of Li Zicheng, which rose up to oppose the government that had failed to protect the people, had very few cases of infection. In fact, the invading Qing army had almost no infections as they set about overthrowing the corrupt government and officials of the Ming Dynasty. After the demise of the Ming Dynasty and the establishment of the Qing Dynasty, the plague disappeared altogether, and the prosperous eras of Emperors Kangxi and Qianlong arrived.

The ancient Roman Empire’s brutality in persecuting Christians caused four large outbreaks of plagues, mostly related to the bubonic plague (black death), and eventually led to the elimination of half of the population of the empire.

Whether in the East or West, plagues tend to disappear promptly after a massive outbreak.

Since ancient times in China, whenever a disaster endangered the country, the emperor would hold a sacrificial ceremony, sincerely worshiping to Heaven and confessing his sins to both God and man.

This time, the CCP virus originated in Wuhan, China. If we relate the current political corruption with the plague outbreak and compare it with history, we can find that they are very similar. There are those in religious circles who also believe that this is Heaven’s condemnation of the CCP and its allies.

Just stop to think about how many evil acts have been committed by the CCP since its founding, including in modern times with the persecution of Falun Gong, Christian underground churches, Tibetans, and Uyghurs. How many people in the world have been bought by the CCP and become accomplices in its evil actions?

When faced with the CCP virus, it might be worth thinking about the ancients’ perspective on plagues.