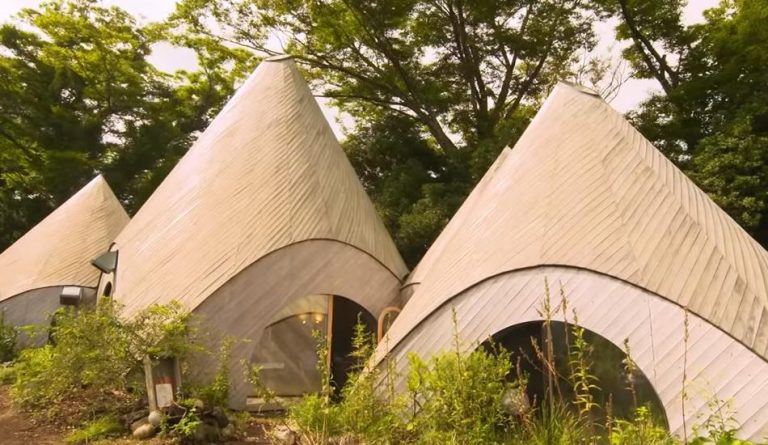 The Jikka is a retirement home for seniors. (Image: Screenshot via YouTube)

In Japan’s eastern Shizuoka prefecture, there is a cluster of retirement homes that attracts the attention of any passerby who sees it. Called the Jikka, the tepee-shaped structures have been designed as retirement homes for two women in their 60s — Sachiko Fujioka and Nobuko Suma. The retirement homes were designed by Nobuko’s architect son Issei Suma.

“Constructed of concrete and timber, the 100-square-meter site is equipped with a kitchen, dining area, shared bedroom, guest room, and bathroom. There’s even a wheelchair-accessible, spiral-shaped pool for residents to relax in. In addition to accommodation, the complex also prepares and delivers meals to the senior population of the surrounding community,” according to My Modern Met.

Nobuko and Sachiko purchased the plot at Shizuoka more than 15 years ago. In 2014, construction of the retirement homes began. The Jikka retirement homes were completed the very next year, cost US$535,000 to build, and cover an area of 1,900 square meters. The complex has extensive cooking facilities that make preparing food for a large number of people possible. While Nobuko specializes in baking bread and cakes, Sachiko devotes her time to preparing meals for the elders. The two women plan on opening up their community to other elderly people in the future.

When Issei was given the contract for constructing the home by the two women, he was told that this was going to be their final abode. They wanted to live the last years of their life servicing the community. The overall aesthetic focuses on simplicity. There isn’t too much complex ornamentation on the structures. The idea was to ensure that the living space creates an environment conducive to healing the mind and the body.

“The unusual shape of the home echoes the mountain ranges it’s surrounded by, while the use of wood is intended to blend in with the 820-feet (25-meter) high zelkova trees that encircle the site… ‘Chapel-like’ high ceilings not only bring in an abundance of natural light into space — for the architect, they are also symbolic of old age,” according to CNN.

Japan has one of the highest proportions of seniors in the world. As of 2018, almost 28.4 percent of Japanese were 65 years or older. The government recently announced that it has decided to reform the “kosei nenkin” public pension program for corporate employees. The proposed changes are expected to increase the number of people who pay into the system. This will mostly affect the elder and female population of the working class.

“Those working at companies with payrolls of 101 people or more will be subject to the kosei nenkin system starting in October 2022, while those employed by companies with 51 or more workers will become eligible two years later. Currently, the workforce requirement stands at 501 or more. The revision is expected to lead to an increase of some 650,000 in the number of workers participating in the pension program,” according to the Japan Times.

At present, people between the ages of 60 and 64 are subjected to benefit reductions in case their income exceeds 280,000 yen per month. The government will raise this limit to 470,000 yen. Plus, people can choose to start receiving pensions between 60 and 75 years of age. If a person who is 65 years old is receiving a pension and is still working while paying into the program, his pension amount will be increased.