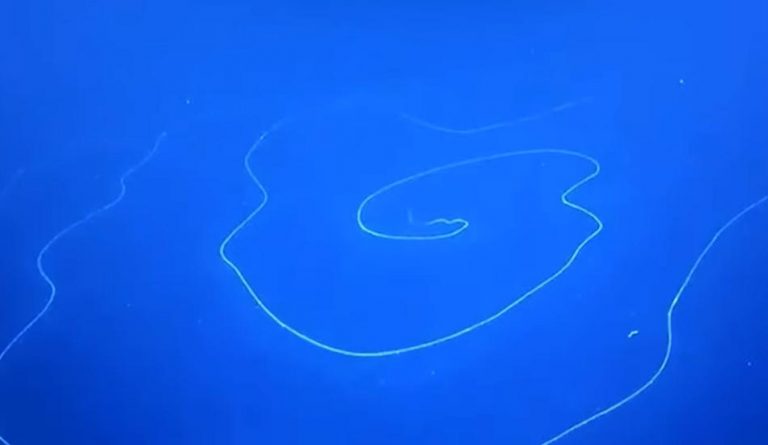 The siphonophore was in the shape of a gigantic galactic whirling mass. (Image: Screenshot via YouTube)

An expedition that is part of Schmidt Ocean Institute’s initiative in Australia and the Pacific has revealed some startling new results. Exploring the submarine canyons near Ningaloo, research scientists led by Dr. Nerida Wilson, a senior research scientist at the Western Australian Museum, stared with astonishment at the picture of a massive sea creature that suddenly popped up on their computer screen.

The beautiful sea creature was swimming at a depth of 2,000 feet. It was a siphonophore. Estimated at an incredible 150 feet long, it was in the shape of a gigantic galactic whirling mass. “It looked like an incredible U.F.O.,” she remarked.

The giant sea creature is a siphonophore apolemia

This predator is in fact, a gelatinous creature composed of a colony of individual zooids, which are clusters of cells that clone themselves thousands of times. But it’s more complicated than that.  In fact, according to a research article published in Developmental Dynamics, zooids are born asexually, and each one performs a  different function for the siphonophore’s larger body.

They are all strung together, to work as a team of tentacles — much like a curtain or a net in which it captures other critters like small fish and crustaceans. Many siphonophores glow green or blue, but some species even glow red when disturbed.

Wilson and her colleagues were joined by researchers from Curtin University, Geoscience Australia, and Scripps Institution of Oceanography. They documented the organism with the help of SuBastian, the remotely piloted deep-sea robot. They completed 20 dives at depths of up to 4,500 meters over 181 hours of exploration.

Onboard the Falkor, a research vessel managed by the Schmidt Ocean Institute, the team’s mission was to learn more about the creatures living underwater in the area. Scientists figured that this twirling siphonophore could be the longest marine organism in the sea. Only the Lion’s Mane jellyfish, with tentacles that reach up to 120 feet long, and the massive blue whales at 100 ft rival the siphonophore sea creature.

Jyotika Virmani, executive director of the Schmidt Ocean Institute said: “What’s fascinating about this particular part of the world is that it has not been explored. Anytime people go down into the deep sea, it’s so vast and yet so unexplored that it’s very easy to make new discoveries and to see something we’ve never seen before. It is like being on a new planet.”

Scientists aboard Falkor also identified up to 30 new species besides the siphonophore. Charlie Wiener, Director of Marine Communications at Schmidt remarked: “Being able to characterize what is there in a changing climate is really important so that we know what we have and if we are losing anything.” The footage and samples collected from the oceans that surround Australia will have important implications for the sustainability and protection of these underwater ecosystems.

During the expedition, scientists spotted a number of glass sponges in Cape Range Canyon and observed for the first time in Western Australia’s waters the bioluminescent Taning’s octopus squid and long-tailed sea cucumbers.

The beautiful scene of transparent floating glass sponges observed in the area of Cape Range Canyon was an extra bonus for the scientists. Glass sponges are commonly found in the deep ocean. Their tissues are glass-like structural particles. Called spicules, they are made of silica (hence the name).

Dr. Lisa Kirkendale, head of aquatic zoology at the Western Australian Museum and the co-principal investigator, said: “These specimens represent so many extensions in-depth and range records for so many species, and will form an important new part of WA Museum collections.”