Londoner Labels Trees on the Pavement 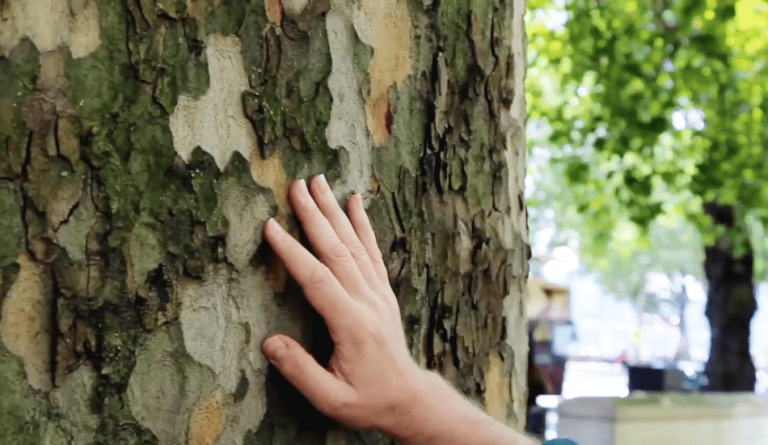 In the Walthamstow district of London, residents recently started noticing that someone was writing down the name of the species of trees on the pavement using chalk. (Image: Screenshot / YouTube)

In the Walthamstow district of London, residents recently started noticing that someone was writing down the name of the species of trees on the pavement using chalk. After people got curious and started talking on Twitter, the person behind this was soon identified — Rachel Summers, who runs a local forest school called Curious Wilds.

A connection with trees

Rachel got the idea of writing tree names on the pavement after a coronavirus lockdown was announced in her region. She missed the woodlands that she used to visit every day. However, she continued with her daily walks in the neighborhood. Once while walking, she noticed the trees located near the streets.

“I was very aware of so many families I work with where they are mostly stuck indoors, without gardens, and in flats. There’s been so much tutting about how people access open green space, mostly coming from people soaking up the sun happily in their own gardens. I wondered how I could use the little I have right now to present the very streets, our last free access outside space, as a gift to those around me,” she said, as reported by Time Out.

Rachel started taking chalk during her daily walks. When she noticed a tree, she would write down the species name as well as a short description. For instance, she described the Sycamore trees as “a real survivor, grows anywhere.”  People on Twitter are apparently happy with Rachel’s efforts, with images of her tree descriptions garnering over 100,000 shares.

Being a forest school teacher, engaging in such environmental education activities is nothing new for Rachel. Forest schools are basically specialized outdoor learning activities that complement the regular school education. She believes that allowing kids to explore the outdoors is a great way to boost their learning process.

Her forest school sessions are aimed at children between the ages of 4 and 11. The idea of a forest school first popped up when Rachel took her kids to St. James’ Park. The environment of the park made her realize that it would make for a perfect educational spot.

Rachel immediately decided to set up a forest school in Walthamstow. However, this proved to be easier said than done. Rachel had to liaise with the Waltham Forest Council and obtain necessary permissions to run training sessions and make payments for using the land. Eventually, Rachel’s efforts bore fruit and the Curious Wilds forest school was set up. In addition to working with kids, Curious Wilds also conducts family classes one Saturday a month.

During the 17th century, the UK’s forest cover reached a record low. The use of timber for building ships and other needs resulted in a great reduction of forests. In the 20th century, the woodland cover in the UK reached 13 percent. A 2018 report by the independent statutory Committee on Climate Change argued for more trees in the country, aiming to increase the UK’s woodland cover to 19 percent by 2050. While this might look good, it actually pales in comparison to other European nations.

In the 20th century, the woodland cover in the UK reached 13 percent. (Image: Screenshot / YouTube)

The woodland cover in the EU averages about 38 percent, which is 3 times the forest cover of the UK. Germany, France, and, Italy all have woodland cover of more than 30 percent. The focus on increasing green cover is driven by the need to limit the effects of pollution and climate change, as prevailing wisdom says that having more trees means cleaner air and better health. One estimate calculates that every US$1.25 spent on trees will save US$8.65 in terms of energy, healthcare, and environmental costs.