What Happens When the Milky Way Galaxy Crashes Into Andromeda? 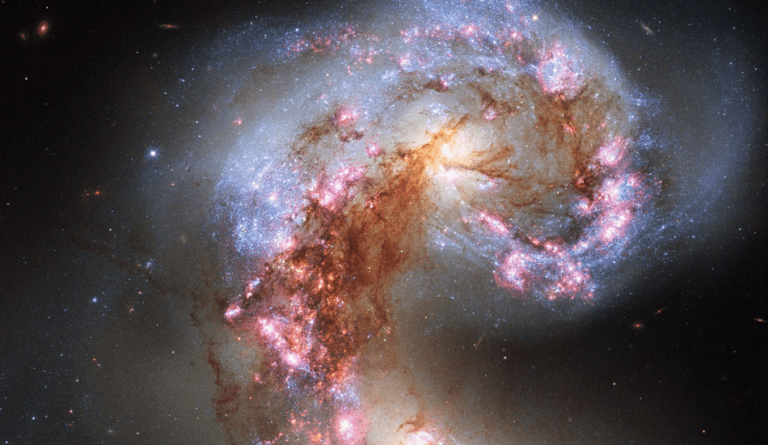 Our Milky Way Galaxy is set to collide with the Andromeda Galaxy in 4 billion years. (Image: via NASA)

It’s amazing to sometimes ponder how the universe came into existence. Most of the physical, chemical, and kinetic forces behind the formation of stars, planets, and other heavenly bodies are beyond our comprehension. However, what we have managed to understand over years of observation and study is that a galaxy is primarily built through collisions between other galaxies. So what happens when our Milky Way Galaxy crashes into the Andromeda Galaxy?

Galaxies on a collision course are called ULIRGs, or Ultra Luminous Infrared Galaxies. This is owing to the fact that the colliding galaxies express a profusely high amount of infrared light in comparison to regular galaxies.

The concept of ULIRGs was first stumbled upon by the Infrared Astronomical Satellite way back in 1983. Scientists could not understand why certain galaxies were emitting light that was mostly infrared. While our galaxy normally emits light that is something in the range of 30 percent infrared, these ULIRGs were emitting 98 percent infrared. To put it in perspective, the luminosity of these galaxies is equivalent to more than that of a trillion suns.

Apparently, galaxy collisions are far from uncommon. Astronomers observing the sky frequently come across several pairs of galaxies coming together to create a bigger galaxy. In fact, our very own Milky Way Galaxy is on a collision course with the neighboring Andromeda Galaxy, which is actually the largest galaxy in our proximity. The collision is slated to happen 4 billion years from now.

Space.com says: “The two galaxies are drawn together by forces they can’t see but they can feel. It’s a mutual gravitational attraction. It’s inevitable: inch by inch, light-year by light-year, as the cosmic clock ticks on through the eons, the galaxies grow closer.”

Of course, when we say “collision,” it’s not like two big trucks smashing head-on into each other. It’s more like two twirling balloons glancing off each other. In a typical scenario, as the two galaxies come within proximity, their respective gravitational forces pull off each other, causing them to slow down considerably.

In the process, stars and gas formations from each galaxy get stripped off and they consequently form thread-like formations called “tidal tails” that form a connection between the two galaxies. As they completely lose their momentum and come to a stop, they start falling back at each other and their stars tango. Ultimately, it becomes difficult to identify the two galaxies separately as they form a single entity.

Light show for the universe in newly formed galaxy

The whole event is a spellbindingly spectacular sight. It’s literally one of the most extravagant light shows in the universe as the hydrogen gas released from the stars gets compressed at a rapid rate and moves toward the center of the newly formed galaxy. This is the hotbed where new stars are formed. It’s called a “starburst” and displays as a beautiful blue-hued light at the center of the newly-formed galaxy.

The community of astronomers has made the hypothesis that this dynamic process through which stars are born holds the key to understanding the formation of proto-galaxies during the dawn of our universe. The shock waves generated as a consequence of these proto-galaxies could have possibly started the condensation process, which in turn acted as a catalyst for new star formation.

In the absence of this condensation, it would take much more time for the stars to form since stars are essentially made from hydrogen and helium. These elements require extensive periods of time to cool down and form a proto-star.

So now, when you look up at the sky and see all those tiny specs of light in the dark, you’ll be looking at them with a new perspective since you are aware of the intergalactic forces and explosive dynamics that go into the making of a star.