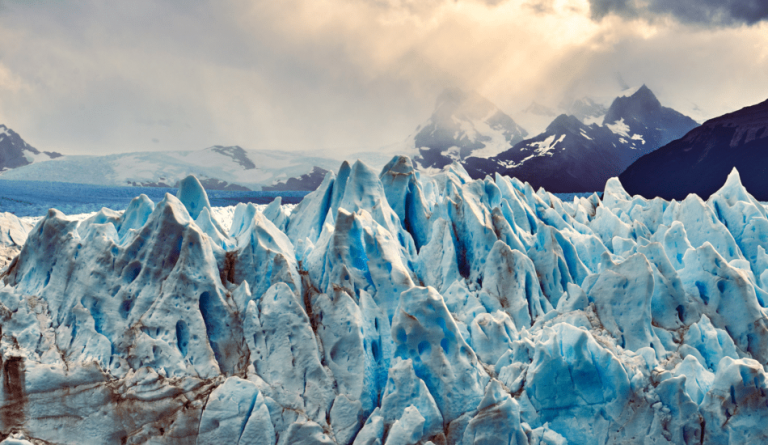 Los Glaciares National Park in Argentina was classified as a UNESCO World Heritage Site in 1981. (Image: Deensel via flickr CC BY 2.0 )

Los Glaciares National Park is situated in the Argentinian part of Patagonia and is spread over an area of 1,794 acres. The park gets its name from the fact that almost half of the area is covered by glaciers. It is the largest national park in Argentina and was classified as a UNESCO World Heritage Site in 1981.

The park is divided into two halves — northern and southern. While both regions are home to several stunning glaciers, the most famous one is the Perito Moreno Glacier in the southern area. Named after a 19th-century explorer, the Perito Moreno Glacier is “19 miles long and rises an average height of 240 feet above the water. Altogether, the glacier covers about 121 square miles. It is part of an ice field located in both Argentina and Chile that is the third largest reserve of freshwater in the world,” according to Atlas Obscura.

Scientists estimate the Perito Moreno Glacier to be around 18,000 years old. It actually started forming during the last Ice Age that started about 2.6 million years ago. A surprising thing about Perito Moreno is that while most glaciers are said to be melting due to climate change, this one is growing at a rate of about 6.5 feet per day. Visitors can choose from a range of tours to the glacier, anywhere from 1.5 hours to 5 hours. There are also excursions available that will take you to multiple glaciers.

The Patagonian Steppe on the Argentinian side of the range is an excellent habitat for numerous animals like the South American gray fox, cougars, guanacos, and so on. Over 100 species of birds, including eagles and condors, can be seen roaming the skies. Unfortunately, the park faces several issues like forest fires and overgrazing, of which the latter has led to the invasion of new species into the environment.

If you are into hiking, check out Mt. Fitz Roy, which provides stunning views of the surrounding environment. At 11,000 feet, the trek to the top may not be everyone’s cup of tea, but the views are well worth the effort.

The park’s administration is located in the village of El Calafate, from where you can hire a tour operator in case you are not interested in exploring the place on your own. Entry to the park costs about US$7.50. A round trip bus ride to the Perito Moreno Glacier alone would cost around US$8.35. Note that prices can change at the park’s discretion.

Apart from the Perito Moreno Glacier, one other glacier that travel enthusiasts should definitely visit is the Vatnajökull in Iceland, the largest glacier in Europe. Last year, UNESCO named Vatnajökull a World Heritage Site. The ice is up to 1,250 feet thick. A look into its blue crevasses, rugged ridges, and various chasms is in itself an enchanting experience.

Jökulsárlón Glacier Lagoon, located at the foot of Vatnajökull, is excellent for boat rides. You might even spot some seals lazing around on top of the icebergs. An interesting fact about Vatnajökull is that it contains water equivalent to 15 times the mean annual precipitation on all of Iceland, enough to fill 1.7 billion typical swimming pools.