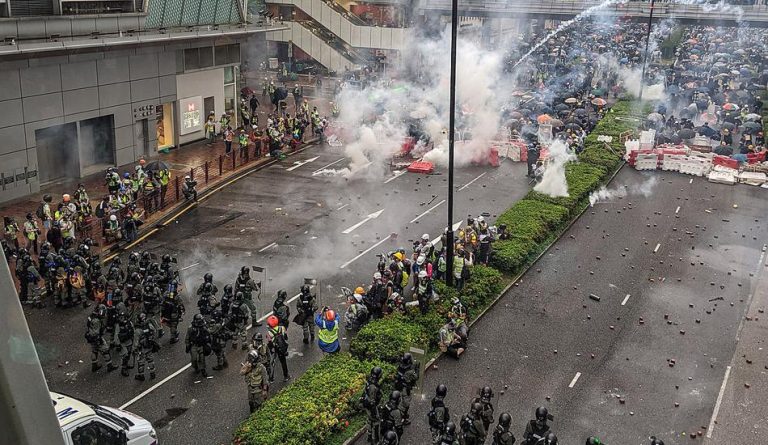 The Western media have represented the Hong Kong protests primarily in political terms, as a fight for freedom and democracy, without paying sufficient attention to their underlying emotional, historical, and cultural dimensions. (Image: Studio Incendo via Pixabay)

Hong Kong police have arrested 14 democracy activists, charging them with conducting illegal assembly during the anti-extradition bill protests that rocked the city last year. Lawmakers from the U.S. and other nations, as well as several human rights groups, have condemned the move, warning that this was heralding Chinese-style persecution inside Hong Kong.

The arrests of democracy activists

Among the 14 activists, 9 of them were former legislators. This includes 72-year-old Margaret Ng and 81-year-old Martin Lee, who founded the Democratic Party. Jimmy Lai, a 71-year-old publishing tycoon, was also among the arrested. Democratic legislator Claudia Mo has called the decision as introducing “a ring of terror in Hong Kong.” She accused Chief Executive Carrie Lam of trying to silence the local opposition.

The arrested activists have been charged with organizing and participating in “unlawful assemblies” in August and October last year. Some were also slapped with additional charges of publicizing “unauthorized meetings.” The 14 individuals are expected to appear in court next month. Lam Wing-ho, the police superintendent of Hong Kong, revealed that more arrests could be on the way. This is the biggest ever crackdown on the Hong Kong protestors.

U.S. Secretary of State Mike Pompeo criticized the decision of Beijing and Hong Kong administration, pointing out that their action violates the commitments of the Sino-British Joint Declaration. In a tweet, he stated that politicized law enforcement was against the ideals of freedom of expression and peaceful assembly.

Baroness Nathalie Bennett and Alistair Carmichael MP, the co-chairs of the UK All-Party Parliamentary Group in Hong Kong, said that the arrests of activists were an iron fist deployed by the Chinese Communist Party to crush the pro-democracy movement in Hong Kong.

The Chinese Communist Party sees the democratic movements as an attack against its ideology and fears that if Hongkongers were to be successful in getting their demands accepted through protests, similar protests might erupt across the mainland. As such, the only way for Beijing to remain in control in the mainland is to crush any idea of democracy or personal freedoms in Hong Kong, caricaturing such values as a foreign invasion of a unified China.

It is possible that the regime might have decided to act against the protestors right now under the assumption that the world would be so busy with fighting against the CCP coronavirus to notice what is happening in Hong Kong. However, it seems like such plans have failed since criticism against Beijing has been mounting ever since the arrests.

“In Xi Jinping’s eyes, this is an opportunity to shuffle the cards and to assert its narrative… If the foreign countries turn a blind eye and fail to rein in [China’s power], they would also suffer,” Johnny Lau, veteran China watcher, said to The Guardian.

China is also planning to replace four senior officials from the Hong Kong administration. The changes are expected to be announced very soon. Alvin Yeung, a civil party lawmaker, warned that the administrative reshuffle isn’t an ordinary one and that it is intended to be a show of power by Beijing. Tang Jingyuan, a U.S.-based China commentator, pointed out that China is using the pandemic period to exert greater influence in Hong Kong and that we will see more such actions from the Chinese side very soon.

Meanwhile, the Law Council of Australia has asked the Hong Kong administration to immediately release the jailed activists, assuring protestors that the council will continue to defend Hongkongers’ right to peaceful protest and freedom of speech. Gloria Fung, president of Canada-Hong Kong link, has requested the Canadian government to take a stronger stand on the issue.