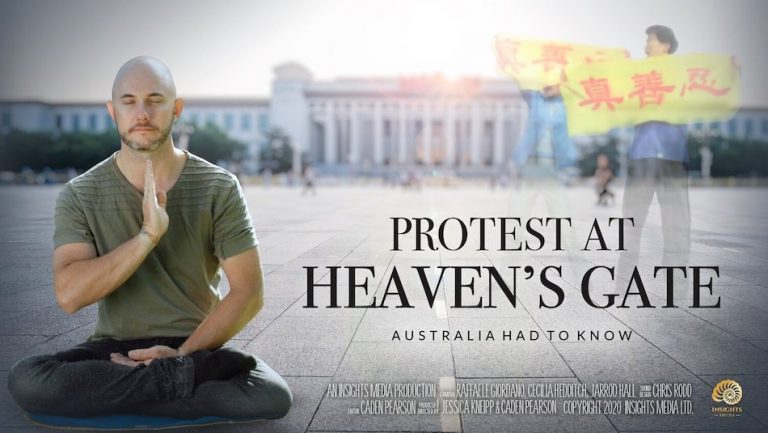 Protest at Heaven's Gate is a short documentary about three Australians and their support for Falun Gong practitioners in China. (Image: Insights Media)

Protest at Heaven’s Gate is a short documentary that recounts the struggles of three Australians who, along with seven of their compatriots, traveled to China in 2002 to support persecuted Falun Gong (also known as  Falun Dafa) practitioners that the Chinese Communist Party (CCP) were torturing in detention centers and labor camps. Just above 18 minutes in duration, the film is directed by Jessica Kneipp and Caden Pearson.

The story is narrated by three Australians who include a Melbourne plumber, his mother, and an Olympic swimmer. The swimmer began to practice Falun Gong in February 1999 and immediately found it beneficial. But in July 1999, the Chinese government began attacking Falun Gong practitioners in mainland China. The persecution was started by Jiang Zemin in 1999, who was the country’s leader at the time. He was jealous of Falun Dafa’s popularity as it had grown to have more adherents than the membership of the CCP.

Having discovered how barbaric the persecution was, the trio couldn’t understand why the media in their own freedom-loving country was not discussing the subject. It was then that they decided to go to China and stage a protest that would draw the eyes of the world to the heinous crimes being committed against innocent Falun Gong practitioners. Together with seven other people who shared their concerns, the group of 10 took the flight to China.

When they arrived in China, they realized that they were being closely monitored. Even the receptionist at the hotel warned them to “be careful.” They went to Tiananmen Square and discovered that guards with rifles were present every three meters or so, which would complicate their plans. When the day of the protest came, the Olympian met with an Australian reporter at a hotel to tell him about their plan.

He warned her that she would be followed, and indeed as she left the meeting, some men followed her through the hotel. Mustering her wits, she ran down a broken escalator, quickly hopped into an elevator to the eighth floor, ran across to another elevator, and zoomed back down to the lobby, darting outside into a taxi and out of the grip of her pursuers.

She had to meet the others at Tiananmen Square at 10 a.m.

When she caught up with the plumber and his mum on the square, they saw that the rest of the group had already pulled out banners and were chanting “Falun Dafa is good” and “Truthfulness-Compassion-Forbearance is good” in Chinese. The Olympian immediately ran to join them, holding up her own banner and shouting “Falun Dafa is good.” The authorities were quick to act. They snatched away the banners and began dragging them into buses.

The plumber and his mother were wearing yellow t-shirts with Falun Dafa written in English and Chinese, covered by a coat. When they reached the center of Tiananmen Square, they took off their coats, sat down, crossed their legs, created the jieyin mudra (hand gesture), and started yelling “Falun Dafa is good.” The mother was taken away by the police into a van.

Three policemen tried to pick up the plumber. But they failed. He recounted how he was “thinking heavy thoughts.” Two more police officers came and tried to drag him. However, he remained fixed, sitting in the “lotus” position (legs crossed on top of each other). The police had to eventually surround him and pick him up by the sides while he remained in the lotus position and carry him all the way to the bus like that.

They were taken first to a police station and then to a hotel where they were isolated in different rooms, with officers questioning and screaming at them, even sometimes spitting in their faces. When the police released them and they were back in Australia, they received the press attention they wanted and were able to speak to reporters about the horrors of the persecution in China and how the CCP also treated them.

Not everyone understood why they went to China to do this. The plumber said some people told him the persecution had nothing to do with them. He told them that it does. Many of the Chinese products that Australian citizens buy actually come from forced labor camps where Falun Gong practitioners and other persecuted people are made to work tirelessly.

In fact, the film includes the death bed testimony of Gao Rongrong who shares a heartfelt message to the world about how she and other Falun Gong practitioners did slave labor under brutal conditions. The film ends 17 years after the events, now in 2019, with three storytellers still raising awareness in Australia about the persecution.  They foresee a time when the CCP no longer exists in China and all Chinese people are finally free to practice their religion and spiritual beliefs under a normal government like other democracies.

You can watch the documentary Protest at Heaven’s Gate here.