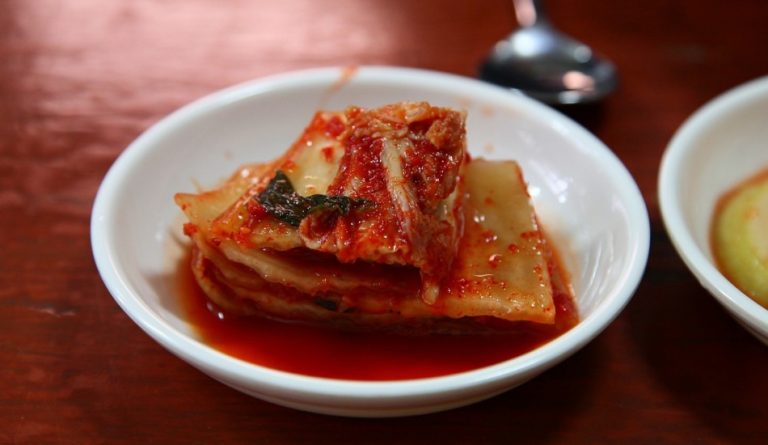 Kimchi is one of the most popular fermented foods. (Image: Pixabay / CC0 1.0)

If you are a fan of Korean cuisines, you will be familiar with kimchi, which is basically the mascot of fermented foods. Scientists have always known that Kimchi is rich in microbes. Now, a study from the World Institute of Kimchi (WiKim) sheds light on the influence of various bacteria found in the food.

For the study, researchers used kimchi that had four ingredients — cabbage, ginger, red pepper, and garlic. “The scientists selectively sterilized the ingredients in different batches, ensuring that only one contained the lactic acid bacteria that would start the fermentation process and make healthy, edible kimchi. They found that garlic and cabbage were each able to contribute lactobacilli, which is one of the key microbes needed for kimchi, while ginger and red pepper were not,” according to PopSci.

These bacteria also produced metabolites like mannitol. The researchers isolated three microbes that play a key role in fermenting kimchi — Weissella koreensis, Leuconostoc gelidum, and Lactobacillus sakei. Depending on the species of lactic acid bacteria, the kimchi would be fermented differently.

Scientists hope that the results of the study may become useful in the production of standardized kimchi. However, the conclusions of the study are only based on a single batch of vegetables. Results can vary when different batches are used. As such, more research on the subject is necessary.

Scientists hope that the results of the study may become useful in the production of standardized kimchi. (Image: adactio via Compfight cc)

For instance, kimchi that uses cabbage as one of their ingredients will provide around 10 different minerals, Vitamin A, Vitamin C, and about 34 amino acids. The fermentation process of the kimchi can end up developing many additional nutrients that can be easily absorbed by the human body.

The fermented nature of kimchi allows for beneficial microorganisms to thrive. Called probiotics, consuming them offers numerous health benefits, like protection from the common cold, easing digestion, promoting heart health, combating cancer, and so on. To get these benefits, a regular serving of kimchi won’t do — you have to eat them in large quantities.

The probiotics and other compounds like HDMPPA found in kimchi can help you deal with inflammation. In fact, a test tube study discovered that HDMPPA suppressed and blocked the release of inflationary compounds. Kimchi might also aid in slowing down the aging process. In one study, human cells that were treated with kimchi displayed an extension of lifespan irrespective of their age.

Kimchi is rich in Lactobacillus bacterium that improves your immunity. A study on rats found that creatures injected with Lactobacillus plantarum, which is found in kimchi, showed lower levels of the inflationary marker TNF alpha. When a person suffers from a disease or infection, their TNF alpha levels are usually on the higher side. As such, a decrease in TNF alpha simply indicates that the immune system is functioning quite efficiently. People who consume kimchi regularly might also benefit from weight loss as well as lower blood sugar levels.