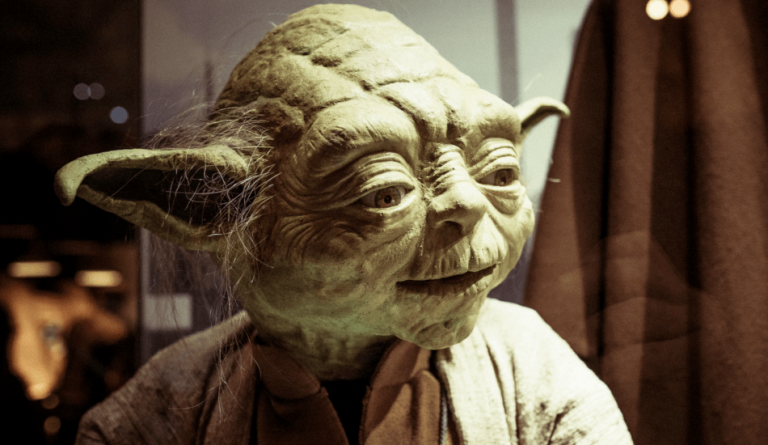 The characterization and teachings of Yoda in the 'Star Wars' franchise strike obvious parallels with Buddhist and Stoic themes. (Image: Kory Westerhold via Flickr)

“Luminous beings are we, not this crude matter.” — Yoda

It’s well known that filmmaker George Lucas was strongly influenced by Buddhist doctrines. Hence, it’s not too surprising that the Star Wars franchise has a strong undercurrent of Buddhist and Taoist spirituality.

The wisdom of Yoda in the ‘Star Wars’ franchise

According to lifehacker.com: “This is a constant theme that runs throughout the saga. That seemingly smaller and even weaker-looking opponents can crush their adversaries using powers or strategies that go way beyond brute force.”

Yoda is one of the most crucial figures in the Star Wars movie franchise. His characterization and teachings strike obvious parallels with Buddhist and Stoic themes. As head of the Jedi Council, his wisdom is revealed in his training of Luke Skywalker in the original trilogy and Anakin Skywalker in the prequels.

The Jedi form a quasi-army organization that operates through a strict code of maintaining peace in the universe. Through many years of rigorous training, meditation, and mental exercises, they have learned to wield “the Force,” which is explained to be a supreme metaphysical power present in everything in the universe.

This is very similar to the Japanese concept of “ki,” as well as the Chinese concept of “qi.”  D.T. Suzuki defines “ki” (気) as “something imperceptible, impalpable, that pervades the entire universe. In one sense, it corresponds to spirit, it is the breath of heaven and earth.” (sivanaspirit.com)

Here, we discuss some of the spiritual concepts that the character Yoda propagates throughout the Star Wars movies.

“The dark side clouds everything. Impossible to see the future is.” — Yoda

In the story, Anakin Skywalker falls in love with Queen Padme. This story forms the crux of the theme of how attachment leads to misery and ultimately destruction. The Jedi culture forbids all kinds of attachment, including romantic love. It is believed to be detrimental to the goal of the Jedi clan, which is to achieve peace.

Although he is one of the strongest Jedi warriors, Anakin struggles to control his feelings for Padme. He gets attached to the notion that he cannot be separated from her, and his entire focus is on ensuring this, leading eventually to his crossing over to the dark side. Yoda teaches how important it is to train the mind to let go of everything you are afraid to lose. In his teaching of how attachment leads to jealousy, “the shadow of greed” is very closely connected to Buddhist doctrines.

The darkness of fear

Another philosophy that Yoda touches on in the Star Wars movies is the concept of how being led by fear is very much like being blind. In the movie, we see that Anakin fails to reach his potential because he is not able to stay in the present. He is fixated on controlling the future and the fear of being separated from the person he is most attached to, Padme. This evolves into anger, which turns into hate, and consequently, his unending suffering, which consumes him.

This fear is deeply connected to his traumatic childhood when he was a slave, and the subsequent death of his mother. We are not very different from Anakin. We allow the past and the future to control our lives and fail to enjoy the present. The present is all we need to focus on to lead a productive and happy life. Easier said than done, though.

When we are fearful or angry, we allow others to control us through these negative emotions. It’s much easier for someone with an agenda to manipulate our fear and use it to their benefit. This is why the Jedi way of life is about keeping these emotions at bay through meditation and the maintenance of a healthy psyche.

The story of Star Wars may be fictitious, but the wisdom propagated through characters like Yoda is profound. It makes us realize that we may have evolved tremendously as a race, but if we do not practice restraint and just allow our fear and anger to control us, the future may actually turn out to be the nightmare we imagined it to be.

“To be Jedi is to face the truth, and choose. Give off light, or darkness, Padawan. Be a candle or the night.” — Yoda