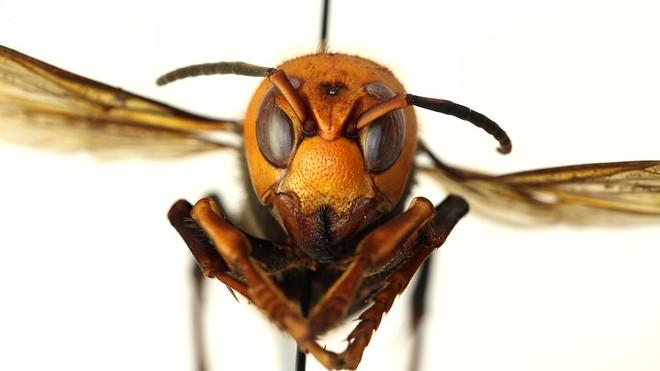 ‘Murder hornets’ have entered the North American landscape and lexicon with horror-film imagery. Vespa mandarina – also known as Asian giant hornets – are thumb-sized carnivores with huge mandibles, outsized appetites, and a venomous sting that will leave a human writhing in pain. But the biggest threat these “murder hornets” pose is to the vulnerable apiary industry and all who rely on pollinators, Western entomologists stress.

Biology professor Brent Sinclair saw these hornets two years ago during a research trip in southeast China. Sinclair, who specializes in the effects of extremely cold weather on insects, said:

“They’re amazing; they’re enormous, like little helicopters. I saw them perched on trees, hawking bees as they came into the hive — much like a sharp-shinned hawk at a bird feeder. If they can get into a honeybee hive — and they will — they’ll systematically eat their way through all the brood of a hive within a few days.

“They are really bad news for beekeepers.”

The hornets were recently discovered in British Columbia and Washington state, having hitchhiked in cargo across the ocean and sparking fears they may spread elsewhere in North America. Sinclair balks at the insects’ gruesome nickname saying:

“I wish people wouldn’t call them that; sure, they’re pretty big and can be devastating, but we don’t call cars ‘murder vehicles.'”

However, he admits they bear watching. Like other invasive species, such as emerald ash borers or zebra mussels, these hornets could throw off ecological balance and biodiversity because they have no known enemies in this environment. Already susceptible to varroa mites, colony collapse disorder, and neonicotinoid pesticides, honeybees would be imperiled by this additional threat.

The Canadian Honey Council estimates the annual value of honeybees in crop pollination alone is about $2 billion. Biology professor Graham Thompson said murder hornets could destroy a hive of tens of thousands of honeybees within hours. The queen giant hornet nests in soil and feeds herself in spring and then workers forage for her in the summer.

Once they’ve found a honeybee hive, the giant hornets use their powerful mandibles to rip apart the bees’ heads, leaving a clear path to the protein-rich larvae and pupae. Then the giant hornets call in their hornet buddies to finish the job — leaving only carnage and a shell of a hive. Thompson, whose research examines the social behavior of insects, said:

“They’re foraging for protein and their specialty is to attack honeybees because they’re a high source of protein. Hives are the ‘Costco of the insect world,’ and they’ve entered the cafeteria.

“If you put it in human terms, they’re pretty violent. But from the insects’ point of view, they’re just doing their business.”

Asian honeybees have developed defenses by mobbing the hornet in a bee ball, suffocating the intruder with their body heat. But European honeybees, which are the main species cultivated in North America, don’t have those same defenses. Thompson said the multiple sightings on the West Coast suggest the hornets are either continually being introduced into the environment or have already established a population here. While they may be few in number now, Thompson said the question we face is:

“Should we concentrate on getting rid of them right now so they don’t increase in number as invasive species do?”

Not that it would be easy to find and eradicate them. The insect’s sting can penetrate normal beekeeper clothing. Even for people without allergies to bee venom, it will cause angry welts. There have been some reports of people in Japan dying after having been stung repeatedly.

But Thompson said reports of harm to humans are rare, adding:

“I wouldn’t say that people need to close their windows or anything. But it’s interesting from a biological point of view.”

Provided by: Debora Van Brenk, University of Western Ontario [Note: Materials may be edited for content and length.]