A Short Film: This Is How the CCP Treats People Suspected of CCP Coronavirus Infection 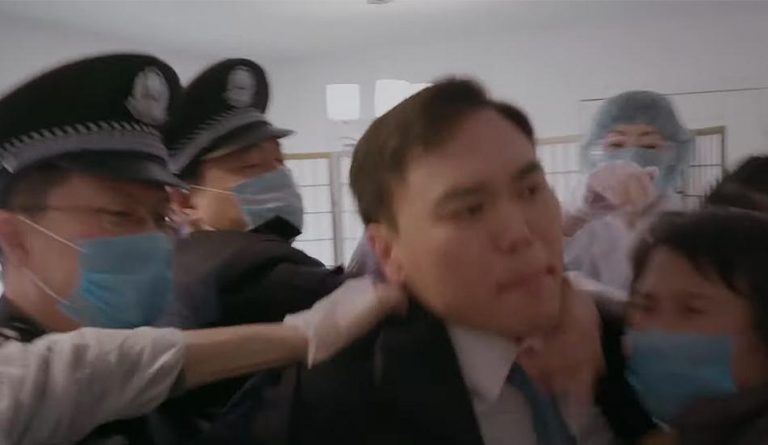 The Chinese government represses any talk of the CCP coronavirus. (Image: YouTube/Screenshot)

In Times of Crisis is a short movie depicting the ruthless way in which the Chinese Communist Party (CCP) has dealt with people suspected of CCP coronavirus infection. However, not everything is bleak and gloomy, as the movie also shows how a positive attitude, inspired by the teachings of Falun Dafa, helps people get through even the toughest of times.

The film starts off in a police conference room where the head official reminds his underlings how important it is to prevent and control the virus so that the Party can continue to maintain its power and ensure “social stability.” He asks them to follow the orders of the communist leadership, prioritizing the safety and care of cadres and other political leaders.

The leader instructs that doctors who spread rumors online (which basically means that they speak the truth, which the Party finds inconvenient) be immediately arrested. In the following sequences, we see state officials forcefully dragging away medical personnel just because they had decided to warn people about the viral outbreak.

However, these people are not the central characters of the movie. Instead, they educate us that there is something more dangerous than a virus outbreak — a government that shuts down any discussion on the matter, leaving people to grasp at straws during such critical times.

The core story revolves around a family composed of two parents, their children, and grandparents. Two officials come to their home, nail a few wooden planks on their doors, and warn them that they are not to set foot outside or else risk being shot. Trapped inside, the grandfather is shown to have a high fever, indicating that he is probably infected with the CCP virus. The parents soon suspect that one of their children may also have the virus.

The grandfather is angry at the Communist Party for treating them like this, while the grandmother thinks of committing suicide should something happen to her husband. The family becomes desperate, seeing no way out, resigning themselves to be neglected by the state, and eventually die. This is when hope arrives in the form of the wife’s cousin.

The cousin insists that she be allowed inside. Despite the parents asking her to stay outside and be safe, the cousin eventually manages to come inside the home. She makes the family watch a movie about Falun Gong in which the main character helps treat his cancer by following the spiritual teachings of Falun Gong.

The family also reads the Nine Words of Truth of Falun Dafa. A relative, who is a professional doctor, arrives at the family’s home after bribing an official to let him pass despite quarantine regulations. After checking the temperatures of the family members, the doctor declares that they are no longer infected with the virus.

The family realizes that their exposure to Falun Dafa has contributed to their wellbeing. Suddenly, the two officials who sealed the family inside appear and start apologizing to the family. They reveal that they have been forced to commit crimes due to Party orders, that people are being discovered dead in their homes days later, and that cremation devices are burning people 24 hours a day.

The officials ask the cousin to help them and their loved ones. They bring their family members to the home so as to receive spiritual help. The cousin makes everyone recite the Nine Words of Truth. The film ends with people chanting the words of Falun Dafa.

In one scene in the movie, two officials in the conference room can be seen arguing how much more important it is to be righteous than to hold on to power. They lament the government’s secrecy over the outbreak and the numerous people who have died due to the infection. The officers decide to protect the family, especially the cousin, since they realize that Falun Dafa is helping people to deal with the hardships of the CCP coronavirus.

This scene perfectly captures the crisis China is facing today — instead of making things easier for its people to fight the CCP coronavirus, the Communist Party is making it more difficult just so that it can remain in power. Naturally, any sensible person would be disappointed with the Party and its approach to the outbreak. In fact, there are already discussions about how the pandemic may act as a trigger for the eventual collapse of the communist regime. Until then, the Chinese people only have themselves and their faith to rely on.