China’s First Mars Lander is Going to be Called ‘Tianwen’ 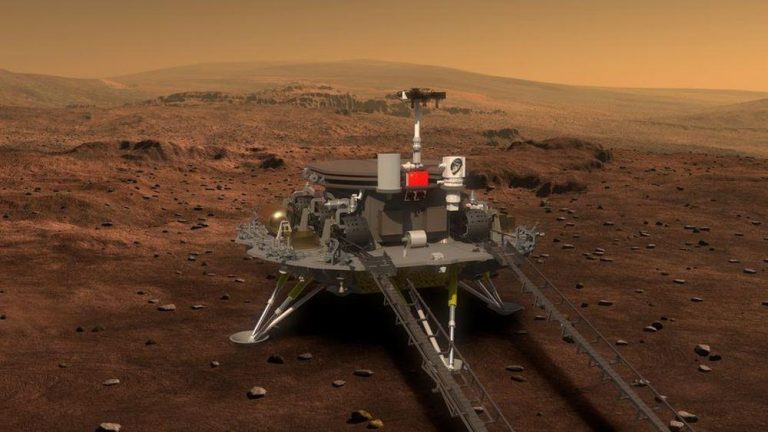 China is enjoying the success of their recent Chang’e 4 mission to the Moon, which included a lander, a rover, and also a communications satellite. (Image: via Xinhua)

Friday April 24 was China’s “Space Day,” celebrated on the 50-year anniversary of its first satellite launch. This past Friday, China marked the occasion with the announcement of the name for their first Mars Lander: Tianwen. According to China’s National Space Administration (CNSA), Tianwen translates to “Quest for Heavenly Truth.”

China is enjoying the success of their recent Chang’e 4 mission to the Moon, which included a lander, a rover, and also a communications satellite. Now, they’re launching a mission to Mars, scheduled for this upcoming July. The Tianwen mission will also feature an orbiter, a lander, and a 6-wheeled, solar-powered rover. CNSA said in a statement:

“…the Martian probe will conduct scientific investigations about the Martian soil, geological structure, environment, atmosphere as well as water.”

The CNSA isn’t as open as NASA or other space agencies, so some of the details of the mission are unclear. But it is roughly aligned with other Mars missions, which are investigating the current and past conditions on Mars, and whether they were conducive to habitability.

In 2016, official Chinese news outlet Xinhua reported that Tianwen will “probe the ground with radar, perform chemical analyses on the soil, and look for biomolecules and biosignatures.” The CNSA also said:

“The name represents the Chinese people’s relentless pursuit of truth, the country’s cultural inheritance of its understanding of nature and universe, as well as the unending explorations in science and technology.”

That’s all well and good, but what are some of the details of the mission? The spacecraft, which will arrive at Mars sometime in February 2021 (if the July launch date is firm) will orbit the planet for some time. China hasn’t said exactly when the lander/rover will be deployed to the surface. But when it is, it’s expected that it’ll use retrorockets, airbags, and a parachute to manage its descent and landing. It looks like the Tianwen name applies to the lander, but the rover will get its own name.

The rover will be a 6-wheeled, solar-powered rover, and should have a mission length of at least three months. It’ll carry 13 scientific instruments and will weigh more than 200 kg (440 lbs). Though important all on its own, the Tianwen mission is also a technology demonstration mission for China’s next mission to Mars, which is an ambitious sample-return mission slated for the 2030s. None of this is a slam-dunk, of course. We’re getting accustomed to successful landings on Mars, largely thanks to NASA.

But many attempts at landing a spacecraft on Mars have failed abysmally. There’s a lot of sophisticated technology that must be deployed effectively to work. And though China has recently had success with their Moon mission, other countries’ missions to Mars have not gone well.

The first attempt at landing on Mars dates back to 1962, when the Soviet Union tried to get a lander to Mars. That mission failed to leave Low Earth Orbit. In more modern times, March 2016 to be exact, the ESA’s Schiaparelli EDM lander crashed when it tried to land on Mars.

In fact, only the U.S. and Russia/Soviet Union have successfully landed craft on Mars, and only NASA has successfully landed rovers. This won’t be China’s first mission to Mars. They were part of the Russian Phobos-Grunt mission. That spacecraft was meant to visit the Martian moon Phobos and return a sample, but China included their Yinghuo-1 Mars orbiter on that mission. That mission was destroyed when the rocket exploded. As for landing sites, initially the CNSA was looking at two possibilities.

Those were the Chryse Planitia region and the Elysium Mons region. However, in 2019, China announced that it had identified two preliminary landing ellipses, both in the Utopia Planitia region. Each of the ellipses is about 100 by 40 km (62 x 25 miles.) The CNSA also unveiled its new logo for their first Mars mission. It’s a stylized letter “C” for China, as well as planets in orbit. The Tianwen mission logo also includes the word “Mars.”

Provided by: Universe Today [Note: Materials may be edited for content and length.]