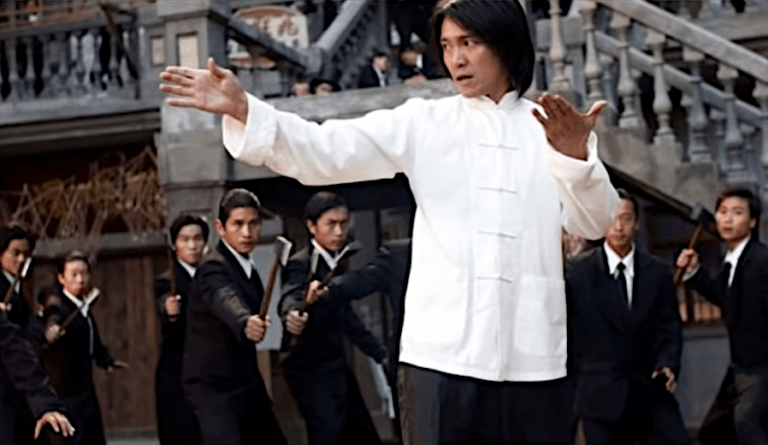 Kung Fu Hustle is a 2004 action-packed movie directed and produced by Hong Kong-born Chinese filmmaker Stephen Chow, who also plays the lead role. It is a classic masterpiece of justice prevailing over evil. The movie has profound significance for people today. It can be viewed from many different perspectives revealing the secret weapons to counter the CCP virus and to restrain its evil. To uncover these magic weapons, we will have to revisit the plot of this masterpiece for clues.

As soon as Kung Fu Hustle was released for screening, it climbed up rapidly to become the highest-grossing film in history in mainland China and Hong Kong. The movie was nominated for 16 Hong Kong Film Awards and also won the best film and best supporting actor awards at the 10th Golden Bauhinia Film Awards.

For the mainland China promotional poster of Kung Fu Hustle, Stephen Chow is holding a lollipop in one hand and an ax in the other hand. This reveals a clue for the theme of the movie. The lollipop implies a person’s innocent intent and kind heart that has the courage to fight evil and defend goodness.

The ax, if properly used, represents the courage to overcome evil. The ax also implies evil intent and an evil nature that must be destroyed. In the battle between good and evil, the lollipop represents justice, goodness, and purity, whereas the ax represents evil and the dark power. Regular people often interpret the forces of evil to be the CCP. And in reality, the CCP’s emblem is an ax together with a sickle.

The movie is set in Shanghai in the 1930s and tells the story of a rundown slum called the “Pigsty Alley,” which was ruled by the notorious Axe Gang. The gang viciously poured gasoline on a girl who was protecting a child and they wanted to burn them to death. Everyone in the alley was scared and dared not move.

Even a couple who were martial arts masters did not come forward to help. Just as they were about to be set ablaze, a hero awakened and stepped forward to avert the evil. He said: “As much power and ability as you have, you still must bear the responsibility for that power and ability and pay for your deeds.” These words awakened everyone, along with the martial arts couple. All of them suddenly stood up to resist the Axe Gang.

Human awakening is a gradual process. Here, the movie tries to tell us that although we humans can be downtrodden and desensitized to our surroundings, we always have a guiding conscience. When the conscience awakens, the individual will choose to sacrifice their personal interests in the name of justice and righteousness. This movie also reveals that there is no gray area between justice and evil. We either choose justice where there is a bright future ahead or follow an evil path that will reap ruinous consequences.

Returning to the protagonist, under the gang’s dark influence, he became adamant that good guys never win, so he resolved to be a villain. He then chose to join the Axe Gang. As the plot of the movie unfolds, at the last moment in the battle between good and evil, Chow’s kindness finally overcame his evil nature. Disregarding his own personal safety, he resolutely withdrew from the gang. Holding on to his righteous thoughts, he fought the evil till the end, even to the point of being crippled and on the verge of death.

The martial arts couple took Chow’s physical body back home and cared for him. They then discovered that Chow’s two energy channels “Ren and Du” became connected during the fight from the knocks and blows by the gang. In real life, according to what great qigong masters have undergone, when the two energy channels are connected, the result is that a person will achieve righteousness in mind and body. It was on account of this elevation to righteousness that Chow fought and subdued evil to the last.

Getting back to the CCP Virus, it is spreading all over the world and is everywhere. It chases down people who have close links to the Chinese Communist Party, which is a terrible evil entity. Kung Fu Hustle reveals the hidden key — that to subdue evil we must awaken our conscience, think righteously, and do what is virtuous.