Accepting and Correcting One’s Own Wrongdoings 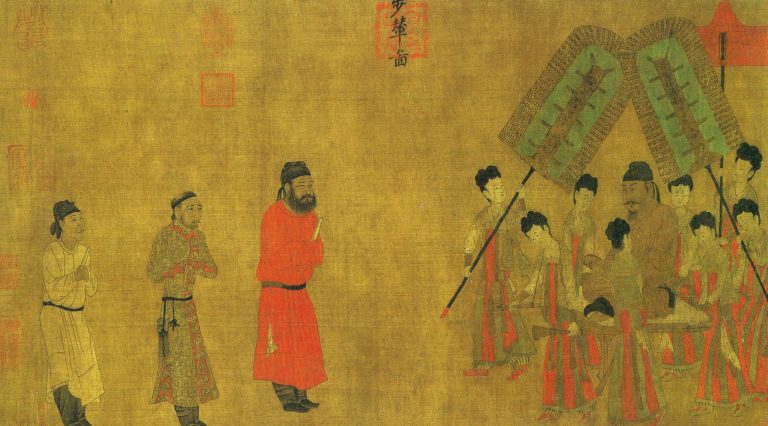 Emperor Taizong depicted giving an audience to Gar Tongtsen Yulsung, the ambassador of the Tibetan empire. (Image: via Wikimedia Commons)

Emperor Taizong of Tang, also known by his original name Li Shimin, discussed the lessons of the demise of the Sui Dynasty because of his wrongdoings with his ministers. He believed that Emperor Yang of Sui brutally refused to accept any admonishment, which had the effect of terrifying his officials. They subsequently did not dare to express their opinions. Li Shimin asked the ministers to consider Sui’s demise and promised them that he would not repeat the wrongdoings of Emperor Yang of Sui and Emperor Jing of Han, who mistakenly executed Chao Cuo.

At the beginning of the founding of the Tang Dynasty, Emperor Taizong ordered his citizens to renovate the ruined Qianyuan Hall in Luoyang so he could use it as an official palace when visiting the fields. However, Zhang Xuansu, a little-known official, wrote a report that was presented to him pointing out the emperors’ previous wrongdoings: “As the Afang Palace was remodeled, the Qin Dynasty fell; as the Zhang Huatai was repaired, the Chu Kingdom collapsed; as the Qianyuan Hall was refurbished, the Sui Dynasty died.

“Now that the country has just been established and there are many things to do, how can the national power be better than that of the Sui Dynasty? Your Majesty ignores the people’s hardships and wants to spend hundreds of millions of Kai Yuan Tong Bao on this meaningless thing. Your Majesty does not inherit the emperors’ advantages of the previous dynasties, but their disadvantages.”

Emperor Taizong summoned Zhang Xuansu to see him and asked: “You said that I am not as good as Emperor Yang of Sui. Then, how do I compare with the King Jie of Xia and King Zhou of Shang?” Zhang Xuansu bluntly said: “If your majesty really renovates the Qianyuan Hall, it will be as muddle-headed as Xia Jie and Shang Zhuo.” After hearing this, Emperor Taizong was not angry but deeply moved. He withdrew his order and stopped rebuilding the Qianyuan Hall. He praised Zhang Xuansu and rewarded him with 500 pieces of silk.

One time, after fiercely arguing with Wei Zheng in the royal court, Emperor Taizong angrily walked away in the presence of his officials. When entering his harem, he yelled: “I will kill that idiot one day!”

After finding out what had happened, Empress Zhangsun immediately stepped back, dressed in formal wear, and congratulated the emperor, saying: “I heard that there will be loyal ministers under virtuous emperors. Now, Wei Zheng dares not to admonish you because your Majesty is a virtuous emperor.” After hearing this, Emperor Taizong turned his anger into joy.

Contrary to Emperor Taizong’s attitude, many people in history were unwilling to accept and correct their own mistakes, so they always received divine retribution in the end. During the reign of King Zhou of Shang, the king ignored the state, indulged in wine and promiscuous behavior, and pampered his consort Daji, who was said to be possessed by a malevolent fox spirit.

These bad things incurred the people’s resentment. Many times Prime Minister Bi Gan tried to persuade King Zhou to correct his wrongdoings. However, not only did King Zhou not listen, but he also ruthlessly had him executed. In the end, King Zhou was defeated by King Wu of Zhou. When his palace was set afire, King Zhou committed suicide by leaping into the flames, swiftly receiving the punishment he deserved.

“Accept and correct one’s own wrongdoings” is the virtue of traditional Chinese culture. In contrast, modern China under the Chinese Communist Party (CCP) has been turned hostile by the government’s wrongdoings that undermine traditional virtues.