6 Amazing Facts About the Violin 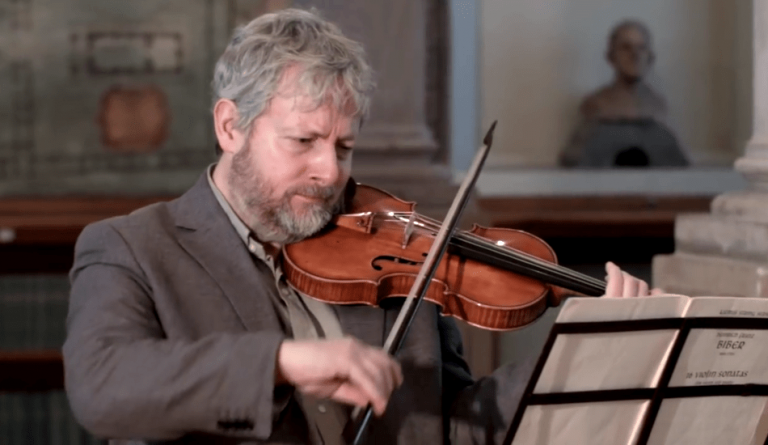 Invented in the 1500s by an Italian named Andrea Amati, the violin is one of the most beloved instruments in the world. (Image: Screenshot via YouTube)

Invented in the 1500s by an Italian named Andrea Amati, the violin is one of the most beloved instruments in the world. The word itself comes from the Latin, “vitula,” meaning string instrument. The term vitula was derived from “vitulari,” which meant “to be joyful.” For an instrument that makes people feel a wide range of emotions, this mane seems apt. Here are 6 interesting facts about the instrument.

High-quality instruments are usually made from either spruce or maple. “Constructing a violin requires about 70 separate pieces of wood to be arranged and assembled. Not only that, but in the older times, the strings of a violin (which nowadays are made from steel or plated with steel) were made from sheep’s gut or catgut that was dried and molded into the form of a string,” according to Violinio. The bow for the instument usually contains anywhere from 150 to 200 hairs of materials like horsehair, nylon, and so on.

Playing the violin is said to be a boost for your brain. This is believed to be the result of using two hands to do two different things. Due to this, the brain is forced to process two different movements, thereby training itself for a wider range of abilities. Under an MRI scan, the brain of a violinist would reveal that the regions associated with left-hand finger movements tend to be more responsive and advanced. Those who have been playing string instruments since their childhood often have more pronounced changes.

The record for the world’s fastest player is held by Ben Lee from Sussex, England. In 2008, violinist David Garret set the record by playing Bumblebee in 1 minute 6.56 seconds. Two years later in 2010, Lee smashed through with a time of 58.515 seconds. While Garret played at the rate of 13 notes per second, Lee upped the ante to 15 notes per second.

Playing the instrument can also aid in weight loss! According to a study, people who play the violin burn around 170 calories every hour. Just three hours of training per day would not only make you a better musician, but also burn off more than 510 calories, which is sizable enough to have an impact on your body. So if you are looking to lose weight, consider enrolling in a violin class and develop an additional skill in the meantime.

The most expensive violin in the world is considered to be the “Lady Blunt” made in 1721 by Italian craftsman Antonio Stradivari. In 2011, the Nippon Music Foundation that owned the instrument sold it for a record US$11.5 million to help Japanese people who were affected by the tsunami. The instrument is named after Lady Anne Blunt, who was its original owner for about 30 years.

The violin comes in varying sizes. The smallest is around 1/64 the scale of a normal instrument (about 14 inches) and is targeted at kids aged between 2 and 3 years old. Only when they master it would they move to bigger sizes and advanced classes. The largest in the world was made by a team of German violin makers.

The best thing about this instrument is that it is not just for show — the instrument can actually be played. Obviously, this is not a simple task. At 14 feet in height and using a bow more than 17 feet long, this one requires multiple talented people to produce music.